A lot of the time lower budget movies will have less money. Almost 100% of the time that is true, actually. This is not an exception. Most of the time the grittiness from lesser cameras works against the overall appeal of the movie, but this may be one of the cases where it kind of makes it better.

I am not a fan of most action movies, especially the ones who try to think they are better than action and try to have a plot, but the plot usually fails. Overcomplication is probably the problem. Arena says screw overcomplication. Lets have some bloody fights! 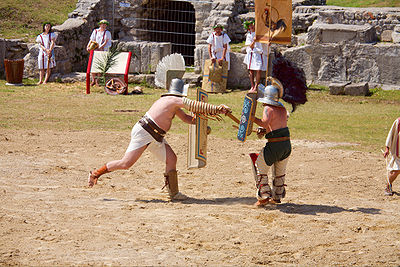 Like this. But less fat people not wearing shirts.

In this world, there is an underground fighting network called Arena. It is secretly located but broadcasts over the internet. After all, the most interesting fight is the fight for survival. The organization, lead by Samuel L. Jackson, kidnaps the downfallen of society and trains them to be brutal and fight other combatants. The audience votes on if the loser should be killed, and also bets on the outcome, generating income for Mr. Jackson. No one wants to be in here, as it means certain doom. Thankfully Kellan Lutz is promised freedom if he wins ten fights in a row, including killing blows.

There are a few twists in the movie, but nothing to write home about. The endings you cannot predict, because they purposefully don’t show you any clues that would suggest it. Daniel Dae Kim is in this movie too, as a prisoner/fighter, although uncredited (at this point? Probably by request).

If you like bloody violence, the fight scenes in this movie feature a lot of blood. They fight in computer generated scenes, with real weapons, based off the surroundings. The construction site weapon choices were particularly interesting. A lot of the fights are cut short, but that is because over 10 fights with one dude to the death would be ridiculous to watch completely. Also, if you like a whole bunch of naked womens, this movie has a bunch. 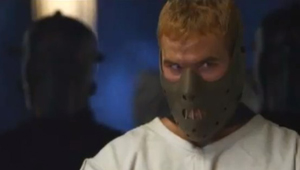 It also has a few, not so subtle, references to other movies.

You could argue that this movie explores how acceptable violence is in America, and the downfall of society, but that would just be bullshit.