I know I know, why would someone review Chipwrecked when it is in the middle awards caliber movie time? Why something from 2011 at the end of 2015?

Well, I like to review anything I watch that came out within the last 5~ years, that way my recreational viewing isn’t completely “wasted.” And I had to watch a bunch of these movies to prepare for Alvin and the Chipmunks: The Road Chip, coming out soon! I can’t go into that movie without knowing what happened in the first three movies. I’d be missing out on hours of plot!

As a quick recap, I liked the first movie enough because of the Christmas and Witch Doctor songs. Classic, not just new pop music all chipmunky. It had a bad acting love interest though. The second film was bad, it felt like an episode of a TV show and very little happened. And Zachary Levi was downright terribad. Now we have Alvin and the Chipmunks: Chipwrecked, which I thought was…oh wait. Yeah. Review. 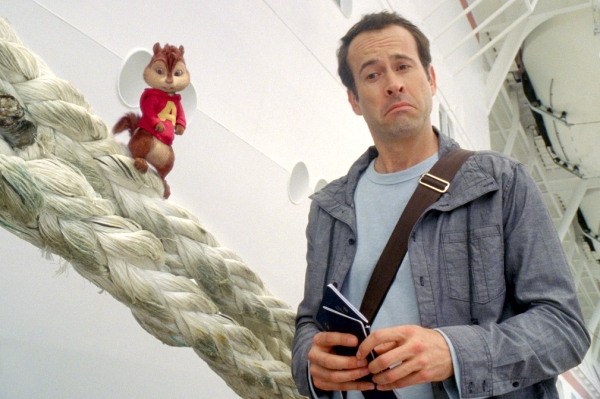 Hmm. Yeah, review. Let’s get on that. This is what the people want.

The gang all here? Dave (Jason Lee) is actually in this movie and not awkwardly replaced by someone who looks like a younger Dave. That’s good. And they are going on a vacation cruise to then go to some vague foreign country for an International Music festival! Huzzah!

But guess what, they get annoying and bad things happen. Next thing you know, they are all stuck on a kite and headed out to sea! Oh no! Not Dave, he can’t be on a kite. But he does jump in after them to save him, getting himself into a pickle as well.

Next thing you know, they are on a deserted island. Not super deserted, because the chipmunks meet Zoe (Jenny Slate), who apparently is a female version of Cast Away and has been on the island for 8-9 years. She is very clean and has a sweet hut.

Eventually a volcano will happen and some other bad things. Simon gets bit by a poisonous spider, which changes his personality to the outgoing Simone (Alan Tudyk), who yes, apparently needs a new actor to speak for him.

Also David Cross is in this one, again, because they need more boring plot lines I guess.

Not to be confused with their sexually confusing plot lines.

The third Alvin and the Chipmunks movie ends up being everything I expected. Which was very little and and bad plot.

But hey, at least some of the songs were good. They packed a bunch in the first half, because they were too busy to sing when “scary” things were occurring. The songs are the only real redemable part.

The villain was lazy and dumb, especially when they already had a volcano. Bringing back Cross was a complete waste, although he ended up having the best lines. I am stoked he isn’t in the next film.

Technically this film seems like it is more about Simon and Jeanette, which is a good change from the Alvin/Brittany show. This makes me hope that the spotlight shifts towards Theodore/Eleanor in the next film, which would make its existence at least a little bit worthwhile.

Hopefully they make it more entertaining than just some catchy song choices and an actual good plot.