History is written by the victors, definitely something you’ve heard before. If not get some education, damn it.

But it is true. Just like dead men tell no tales. Undead men can tell tales, however.

Alternative histories are usually exciting to watch, as you watch events you know definitely occurred, with other questionable events spliced in between. Abraham Lincoln: Vampire Hunter is no different. What this movie is, is a ‘biography’ of the secret life of Honest Abe, as he protected America both from itself and from the blood sucking swarm of the night. Training is best when it is also practical.

Abe Lincoln (Benjamin Walker) grew up in Indiana, with his parents on a plantation. But when his black friend’s family was being sent to the slave trade, despite being free citizens, Abe put himself in harm’s way to protect his friend Will Johnson (Anthony Mackie). This caused his dad to get upset with the plantation owner, Jack Barts (Marton Csokas), who then threatened the Lincoln family if they left his services. Which they did.

But that is a shame, because Jack Barts is totally a vampire, who got his revenge on Abe’s mother that night, and pushing Abe to enact revenge. Nine years later, he tries. And motherfucking Jack Barts is a vampire! And doesn’t die! No worries, mysterious stranger Henry Sturges (Dominic Cooper) saves him, and after some time, agrees to train Abe in the art of vampire hunting. But only if he ignores his revenge, and is willing to listen to everything he says. Sure.

But then after training he moves to Springfield, to study up being a “lawyer”. Ends up finding a job at a local store run by Joshua Speed (Jimmi Simpson) and falling head over heels in love with a Mary Todd (Mary Elizabeth Winstead). During his vampire killing duties, he develops relationships with people (oh no!) and even becomes more politically involved. Gotta stop the slave trade. Real people. And its run by vampires in the South to eat from.

But if he were to stop the slave trade, the vampires would no longer be satiated and move more north. He’d be putting a hex on the entirety of America if he were to give equal rights to people. Hell, that’d probably cause the vampires to join the South in war. Lead by the head vampire, Adam (Rufus Sewall), will Honest Abe be able to stop slavery, end the vampire threat in America, and maintain his presidential life style all at the same time? 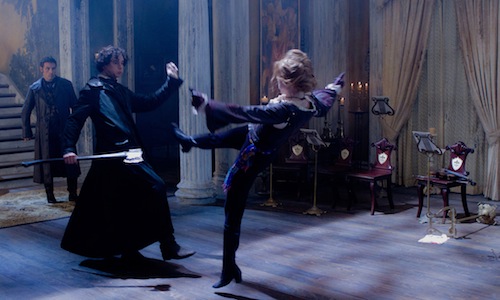 “Bitch tryin’ to kick me? Don’t you know who I am? I’m a muthhafuckin Vampire Hunter!”

Alright, so obviously this is kind of a dumb movie. You know vampires aren’t real, and you know this didn’t happen. But hey, if it was well done and had good action scenes, probably worth it. Why not, right?

Well unfortunately, as a budget saving measure I guess, the action scenes were lacking in luster. They had good ideas, but making them work with CGI? Ehh. Half of the fight scenes, you cannot tell what is going on. Either general blurryness, lots of dust, or fire. Fuck that noise. Movies have proven they can do intense fight scenes and make all of it easy to see. Some movies don’t want to put in that effort, and gimp out when it comes to them. So that is a negative for the movie.

Somewhat slow plot at times, and historical time frame that doesn’t seem consistent with reality. Other things that bug me. But doesn’t change the fact that the idea for the movie was an interesting one, just a poor execution at some of the parts that really mattered.