Twenty-eight years ago, Clerks was released into the world, and I would like to think that the world changed a bit. It helped independent films gain some notoriety, right? It certainly helped Harvey Weinstein, but that is a different story. I watched this film years later, somewhere as a teenager, after already seeing Mallrats at the time.

Sixteen years ago, Clerks II was released! I was able to see that movie the day it had came out. We had to drive an hour to see it, my brother and I, and there wasn’t a lot of people in the theaters. It was certainly a good time. The sequel had similarities with the first film, but certainly stood on its own. And plus, they could afford to Rosario Dawson money, who was actually famous!

The release of Clerks III has taken a long time to come. I know at some point, a script was written for a film, but that did not happen. At a different time, it was turned into a screenplay where the goal was to have it performed on stage for some amount of time, and then shown in theaters in some sort of Fathom event. That also did not come to fruition.

It took Kevin Smith almost dying for him to make Jay and Silent Bob Reboot. But using that same influence, he decided to then make Clerks III about his experiences as well. Even though, theoretically, Clerks was about some of his experiences. And well, that means are getting what they call one of them/there Meta films. 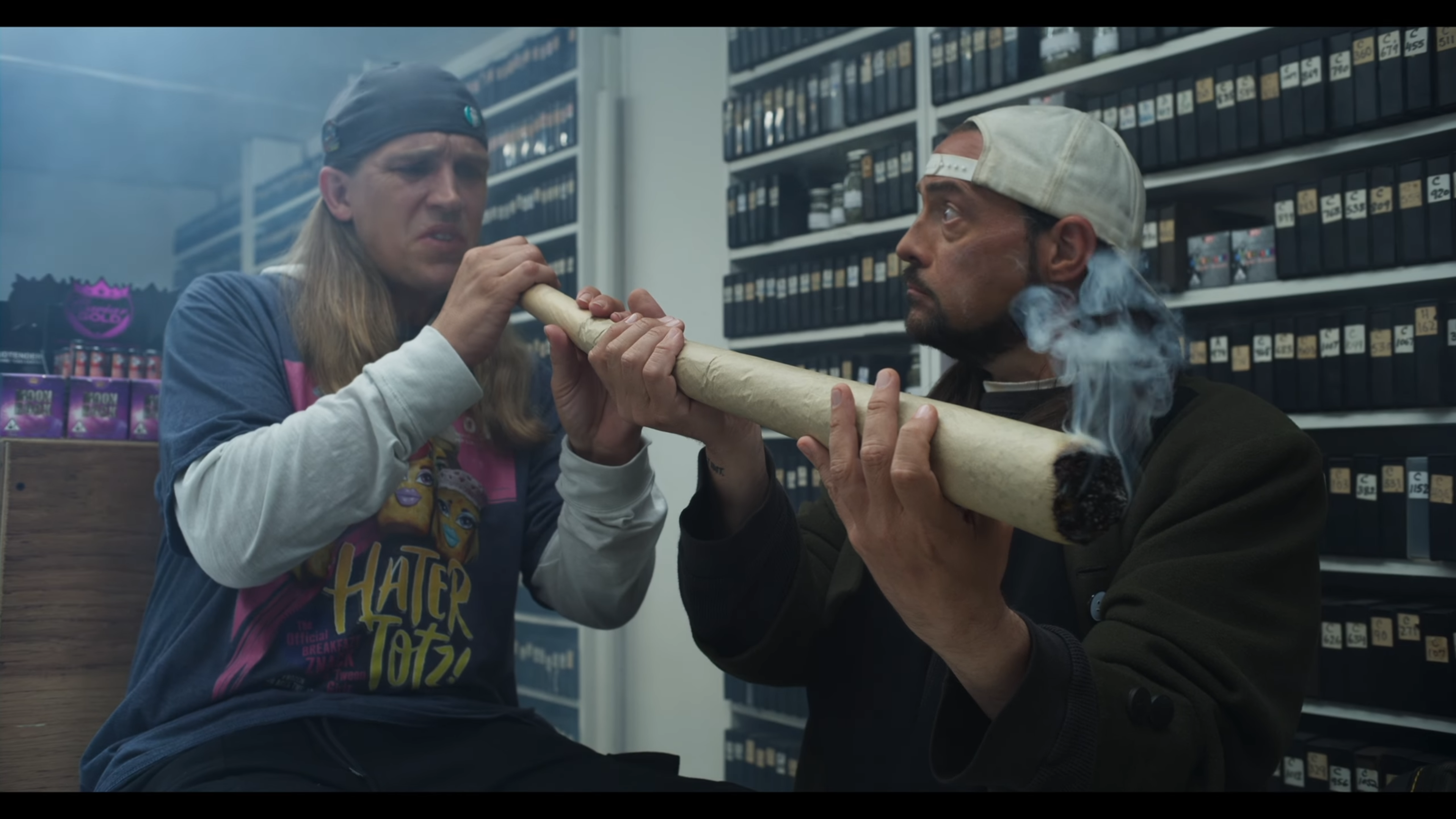 Damn, the stoners are back to doing drugs. Ain’t that a shame.

At the end of Clerks II, Dante (Brian O’Halleran) and Randal (Jeff Anderson) bought the Quick Stop that had burned down with Jay (Jason Mewes) and Silent Bob’s (Kevin Smith) movie money. They hired Elias (Trevor Fehrman) as one of their employees. And of course, Dante finally was able to realize what he wanted in a love life with Becky (Rosario Dawson), whom was pregnant with a child and now engaged.

So where are we at the new movie? Well, the same amount of time has passed and everyone is still at the same store, doing the same job. Except the job is more fun. For example, they can play hockey on the roof without it being a big deal, because they are the owners.

Unfortunately, Randal ends up having a heart attack and almost dies. [Hey, like Kevin Smith!…] Well, Randal doesn’t like that. Sure he might have to change some of his lifestyle, but since he almost died, he wants to make sure he leaves some impact on the world. Instead of just sitting around all day watching movies, he wants to make a movie. He must have learned enough about it now to make a good one right? And why not just make it about what he knows best, working a convenience store as a clerk serving the public. 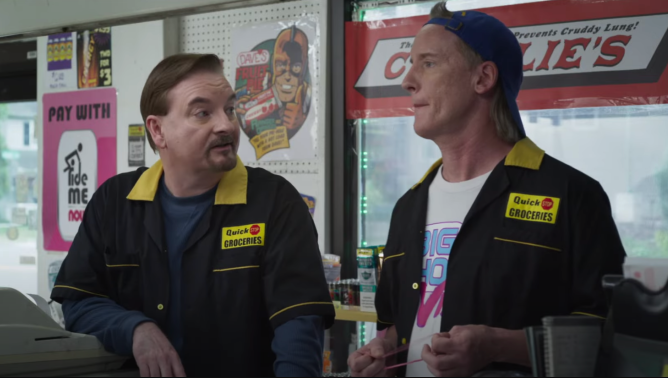 “This job would be great if it wasn’t for all the goddamn movie critics.” – Kevin Smith, probably.

How did Clerks III do? Did it nail the landing? Was it poignant yet funny? Was it sad and finale? Was it just dick and fart jokes? The Before trilogy is wonderful, telling the story of two people every 9 years in their life. Starring the same two actors, and the same director. Is the Clerks trilogy technically doing the same thing, over a longer time frame? Yes. But each part does not feel worthwhile, I am afraid.

There are two very specific moments that I certainly cannot talk about. One found out early on, and one dealing with the film’s climax. The earlier one annoyed me greatly, and changed the context of the film. The latter one made me cry, and yet at the same time, it felt cheap. It felt like something I have seen before. Heck, part of it feels like it was ripped straight out of Me and Earl and the Dying Girl. Unlike Clerks II, where I cried due to great love on the screen, this film had me crying from sadness, but sadness that did not feel earned, nor did it feel like it was even well respected by the material. A very odd position to be in, given the creator’s closeness to this franchise.

Outside of those two specific spoilery moments, most of the movie was watching these older characters try to film and create, what is essentially, the clerks movie. Using friends of theirs from the past to do similar roles inspired by their own fictional real events. What that means is that we got to see a LOT of cameos from the first film, reprising their same roles, and doing the same scenes. That is pretty interesting. Sure. But at the same time, the hardships that came with filming, and the specific things that popped up, were all real experiences as well. And they are all well known and well documented experiences. Because if there is anything Kevin Smith likes doing, it is telling stories from his life. So I was seeing scenes I have already heard before and read before, making the whole thing lose its edge really quickly. I didn’t care about seeing an episode of SModcast, I wanted to see a new movie.

There are other elements of the trilogy that this one doesn’t follow. I am not saying it has to, but it does help stylistically set the Clerks movies apart. This film does not take place over a day, it takes place over many many weeks. A small annoyance, but notable nonetheless.

The Elias plot line with his crypto friend was incredibly wasted. I don’t think either made me laugh at all.

The problems with Clerks III is that instead of telling a good new story, Smith instead chose to tell an old story. And when a lot of your movie is literally rehashed jokes from the first one, it is hard to care. At least in the Jay and Silent Bob Reboot I got closure for Chasing Amy, so it doesn’t need some bad sequel. For this specific series, I should have stopped after it peaked with the interspecies erotica.