Okay okay, I know I said this last time. But finally I am reviewing a Disney Channel Original movie that ISN’T a musical. I thought I had that covered when I was watching Descendants last year, but damn, that was a musical too. I had no idea.

Let’s be clear here. The original film, Adventures in Babysitting, was not a masterpiece movie. It literally came out almost 30 years and having a made for TV remake, to modernize it and change the plot completely, doesn’t change the nostalgic past of your memories.

So I chose to review another made for TV movie, Adventures in Babysitting, because it garnered enough negative reaction on the internet for silly reasons. 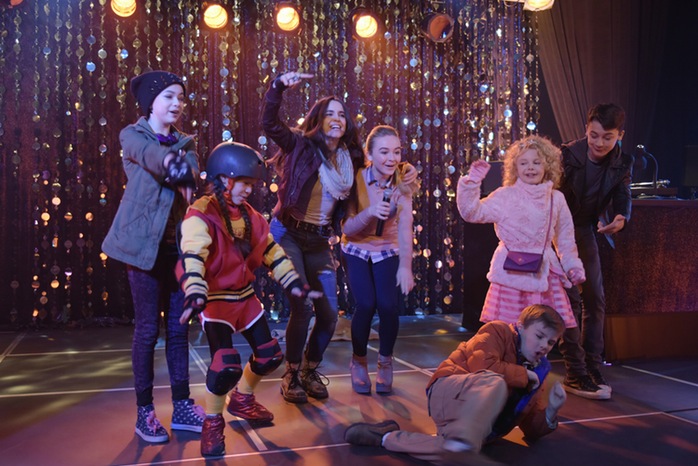 And despite not being a musical, I wait patiently just to see the song scene.

We don’t have one babysitter in this movie, we have TWO. Jenny Parker (Sabrina Carpenter) is your typical do-nothing-wrong high school student. She is perfect, smart, nice, going to college, and a great babysitter. She is also up for a prestigious photography internship, which would be sweet before she goes to college. That is where she bumps into Lola Perez (Sofia Carson), a radical person, college be damned, but the other runner up for the internship. And thanks to a silly misstep, their phones get switched.

Well, Lola suddenly gets a ticket for illegal parking from a hottie police officer (Max Lloyd-Jones), so she needs to come up with cash to pay for it. She answers Jenny’s phone, finds out that there is a parent desperate and willing to pay double, so she pretends to be Jenny and recommends herself. Sweet and easy, no crime done.

Lola has to watch to Anderson kids: AJ (Madison Horcher), who likes roller derby, Bobby (Jet Jurgensmeyer), who likes to cook, and Trey (Max Gecowets), who is older and has a crush on Jenny. Jenny has to watch the Cooper kids: Katy (Mallory James Mahoney), who is obsessed with dressing up and balls, and Emily (Nikki Hahn), who is now counter culture and scene and shit.

Of course, the two groups are brought together when Trey sneaks out to go to the CITY at NIGHT for a concert! And then bad thing after bad thing happens until the group can work together, everyone getting their unique moment to shine, and friendships can be bonded. We also have Kevin G. Quinn as a boy Jenny likes. He is important, I guess. 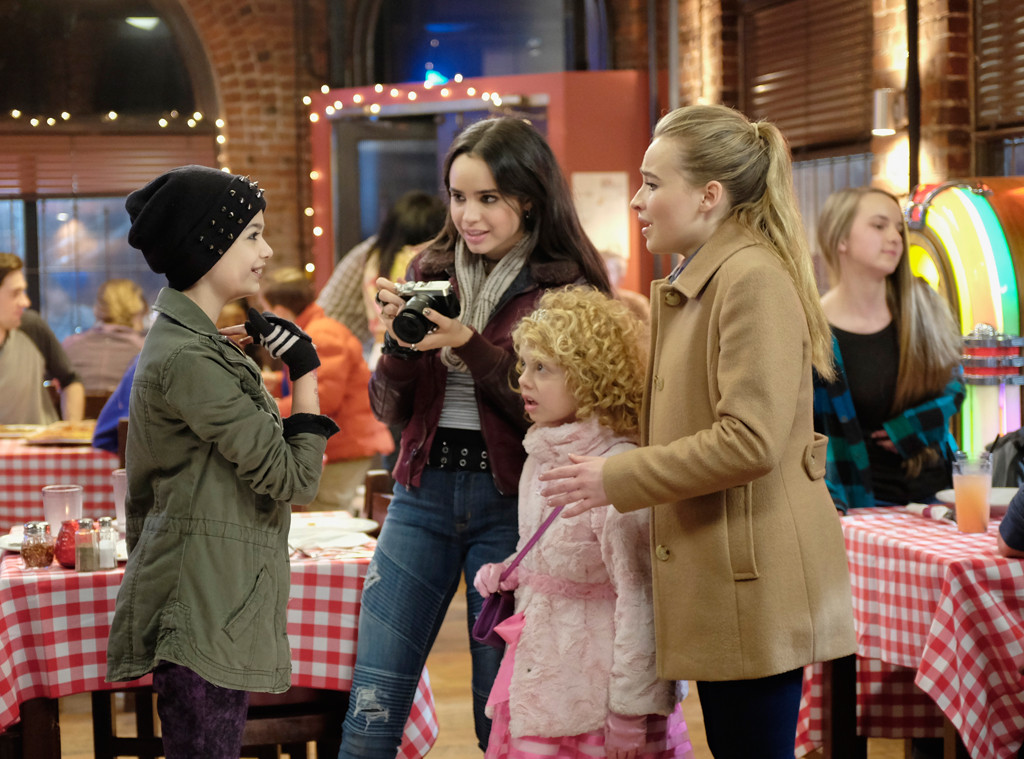 Oh girl, that hat, you are so OUT OF CONTROL!

Don’t hate Adventures in Babysitting because it is a remake of something you probably haven’t seen in 20 years. Hate it because it isn’t a great movie and is almost embarassing as a result.

A few years ago, we had to see The Sitter, a movie that was supposed to be a homage or something to Adventures in Babysitting, but instead it was just overly crude and not funny. This went the other way. It is too nice and safe and thus, boring.

Our two “against the grain” characters are still goody two-shoes. The dangers in the city are basically non-existent. Oh, they are chased by bad people? Yeah, because they took a photo they need to delete and they refuse to talk to the people to find out why they are mad. The kids have no idea why they are now being chased, but they run, all because they wouldn’t talk to them and all they wanted was a deleted picture. Ugh.

Of course there is another antagonist. Just time in general. They have to get the kids back, fix every single issue they cause just by being out, and of course clean up a house, before the parents get back.

The entire thing is just so safe. But what annoys me the most is the plotline about Jenny’s crush. Lola answers Jenny’s phone, talks to the crush, and turns down a concert invite from him and says concerts are stupid. So during the movie, Jenny eventually finds out, says she totally would have accepted the invite, meaning they have to break into the concert for her to meet him and get their eventual dating on.

Bitch, you have to babysit tonight and it is a big night that needs many babysitters. You were not going to last minute cancel on a friend and client for the concert and you know it. Stop lying.

Again, this film is safe and boring and I should probably stop reviewing Disney Original Channel movies. But a Descendants 2 is going to happen eventually, so that is probably when I will return to the fray.