A lot of the times I make a corny joke at the start of these reviews where I get excited about the movie being about one thing, and it is actually about something else, despite the titles being the same. Most of the time it is a lie. Almost all of the time. I don’t think I have ever told the truth for that joke.

But for real this time, we got a movie named Limbo right? I first thought it would be a movie based on the successful indie game Limbo, because I loved Limbo. Limbo made me seek out and try more indie games and opened me up to so much more being out there. I beat it in one day (it isn’t that long) and it was a complete trip. A beautiful sad trip.

Well, this is not that game, and that game likely won’t be a movie. I don’t know why it would be, to be honest.

Instead Limbo is referring to being stuck in limbo. Not the death afterlife one, but just an in general waiting place. 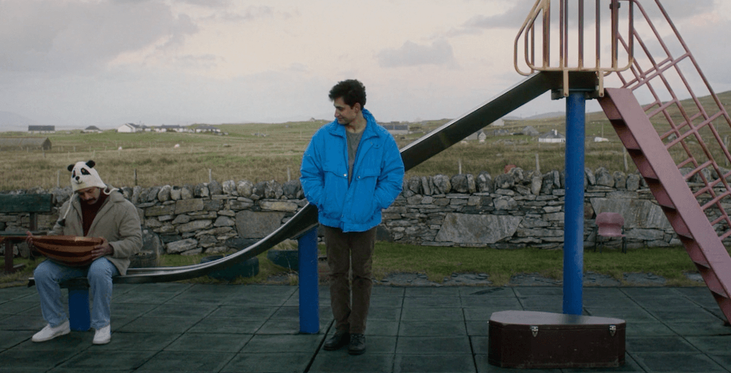 This is like a puzzle. How to get down the slide past the panda-man.

Omar (Amir El-Masry) is a Syrian refugee, from… yep, Syria! Syria has a lot of scary stuff going on. A lot of Isis, and a lot of refugee’s leaving to find a safe place to live and grow in the world. Omar has found himself in Scotland! Specifically, a made up island off of Scotland, a very tiny community that has accepted a couple dozen refugees to join and specifically, assimilate into the community.

They get to take classes on dances, music, culture, proper greetings, language and more, while also are given places to stay. But technically, none of them have been granted asylum yet. They are hoping to be counted as official refugees, because they might be able to secure places for their family as well. And in general, it is not fun to be stuck waiting to see if you would get help and can become a citizen, or if you might be denied and sent back? Is that even what people do? Shit, that is scary.

Omar has to travel to the one pay phone in the region, in the middle of nowhere, just to call his parents, discuss the current events, and give them hope. But Omar, a musician, can’t even find the strength to play his grandfather’s oud, and doesn’t know what will finally give him the spark to feel creative again. 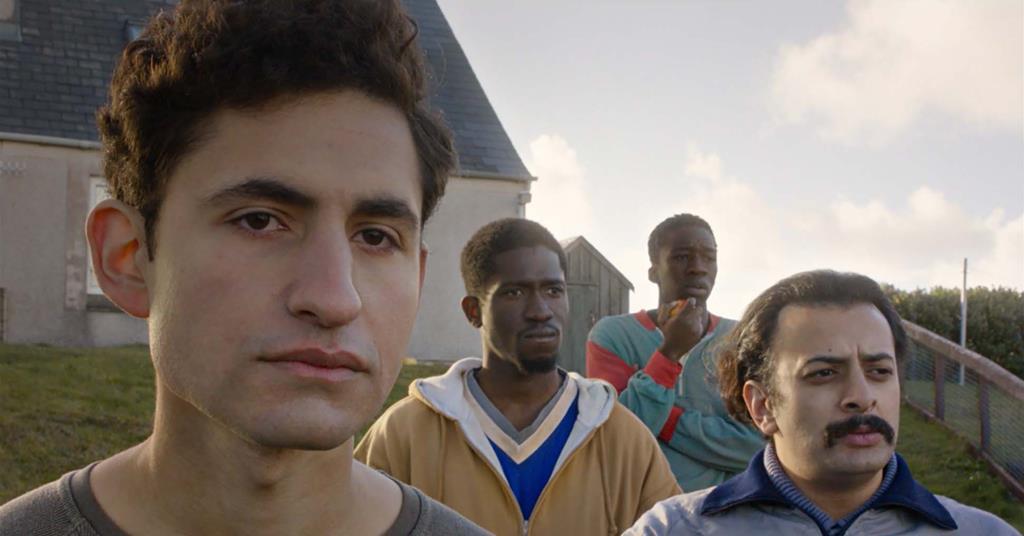 What is that off in the sunset? Hope? Or just more endless nothing?

In Limbo, you get to really feel like you are in the middle of nowhere. There are fields in Scotland, both land based and water based, and a lot of space. That is great, for refugees technically, because they need unused space. But if they are used to big living  city in Syria, going to bumfuck nowhere Scotland can be jarring. It would be for anyone.

Are the people nice there? Sure. But their expectation is assimilation, and not technically them bringing their culture over. Would the locals appreciate his instrument and music choices, or would he be shunned by it?

Some good questions and Limbo gives a lot of time to ponder them. Probably too much time. It does have its fill of quirky moments and situations, mostly dealing with culture clash and the oddities behind it. But the majority of the film is just trying to find existence in a world that is completely foreign to you and seemingly unwilling to bend.

El-Masry gives a deep and personal performance as our lead. He gives a strong performance without there being a lot to actually happen in the film. This is just a snapshot of something that is happening all over the world, and it is just one of those important stories to help ground us and realize what is important in life. You know. Live theater.