The Place Beyond The Pines by itself is an interesting title. It is actually the literal meaning of Schenectady, a town in New York where this film both takes place and is filmed. Damn these clever directors and writers!

The title is also mysterious enough on its own right to potentially gain viewers by itself. Every time there is a bad movie title, I tend to harp on it, so I felt it was my duty to point out the excellent ones as well. 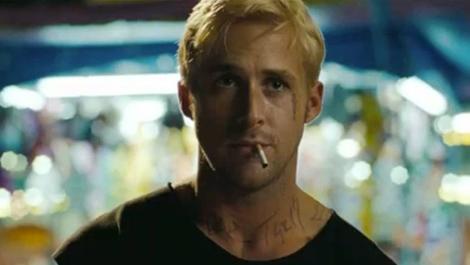 Hey girl, even though I am surrounded by flashy lights and neon signs, all I can see is you.
What would you do to support the ones you love? More importantly, what if you just found out you had loved ones who needed support?

Luke (Ryan Gosling) is a motorcycle rider for a traveling fair, the guy who gets into the tiny steel ball and rides around. It is a lonely life, always traveling, but he can sometimes find love in the random towns that he stays at. Like Romina (Eva Mendes), who he had a nice time with last year, but now lives with a man (Mahershala Ali) and has a son. Well, Luke’s son it turns out.

Luke doesn’t know how to handle this situation, but he doesn’t want to be a scumbag father, like his own, so he quits his job and settles in Schenectady. He finds a job as an auto mechanic with Robin (Ben Mendelsohn), but it still isn’t enough. He needs a large sum, and he needs it now. So why not rob a bank? Who does that really hurt?

This film also tells of Avery Cross (Bradley Cooper), a law school student turned cop, who doesn’t want to follow in the footsteps of his own father (Harris Yulin), a member of the state supreme court. Even the small towns may have local corruption, and that corruption may cause conflict in his household with his wife (Rose Byrne) and other cops (Ray Liotta).

Pines also features Emory Cohen and Dane DeHaan, but I don’t want to tell the specifics of their parts. 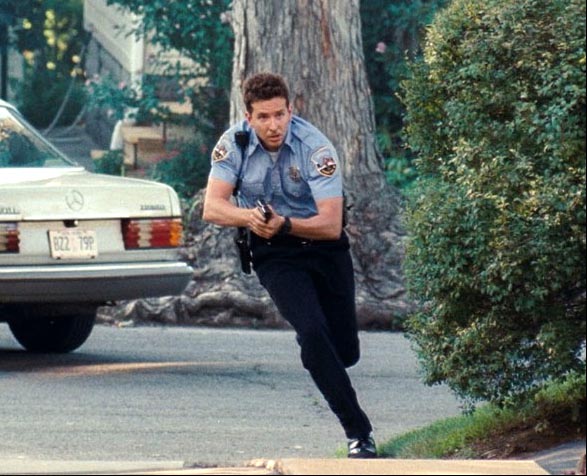 Hey girl, I know I am no Ryan Gosling, but check out these cheekbones. Hey, wait, come back!
The “Sins Of Your Father” theme is a popular one for shows, movies, and novels, yet I always feel like it never really resonates with me and always falls flat. The Place Beyond The Pines might have the best showcasing of this theme I have ever witnessed, making me truly understand the full extent of what it means, and how it can be conveyed.

The movie is split up pretty nicely into three parts, with the end of part one coming out of left field. It was well acted up to that point, but it was still missing a major umph to get my full attention, and it was sure to bring it. After that, I was hooked and couldn’t look away from the screen, wondering what other secrets and twists it had in store for me.

Everything about this movie felt amazing to me, especially the acting. Eva Mendes is basically the only woman character in this movie. Lately, she seems to be put in movies more often for her looks than her talents, but she definitely delivers in this film.

I have talked to about five-six people about this movie, and at least from the “guy perspective” everyone loved it. The one woman I talked to thought it was decent, but not the best. The themes presented may be easier to latch on to for men, since it falls so heavily into the son/father relationship category, but despite that I think this movie can be enjoyed by everyone.

It might just be the best drama I have seen so far in 2013. This with Silver Linings Playbook has elevated Bradley Cooper into an elite acting category, and it will take more than a new Hangover to knock him down from it.

If you went to the movie theaters this summer, you might have heard about Girl In Progress, because really that is the only time I heard anyone ever talk about it. I think I saw the preview for the movie maybe seven times in a single month. SEVEN TIMES. So as you can see, watching this movie as soon as possible was a priority, because damn it, I wanted to know what the trailer kept teasing at me. 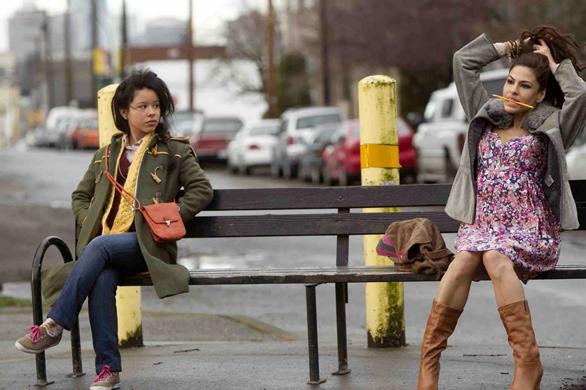 Huh, I wonder if this picture is a metaphor.

Ansiedad (Cierra Ramirez) is just a girl, who kind of hates her position in life. She at least gets to go to a private school, but her mom Grace (Eva Mendes) is having problems paying for it. Grace works a few jobs, including house cleaning for a Dr. Harford (Matthew Modine) and waitressing at a local crab shop. Their relationship is pretty strained, because Ansiedad feels her mom spends all her time working or sleeping with married men (Yep, the doctor) and not enough time just being a good mom.

But (and we are about to get super meta here), when she starts to learn about a genre of novels that tell of coming of age stories, she makes it her desire to have her own “coming of age” story, so she can become and adult and fix her situation in a flash. With her only real friend (Raini Rodriguez) they develop a list of tasks that most occur in order to have the appropriate experience. Everything is on that list, from first awkward kiss to virginity loss, to changing her lifestyle from nerd to badass (including intentionally losing her old friends), to hopefully moving out of her home and escaping to NYC!

While at the same time, Grace’s life is getting more stressful, as she is put in charge of the restaurant while her boss is at a festival. On top of that, Dr. Harford is willing to elope and take their family far away from the area. Sounds sweet, but can easily backfire. But all of these stresses make it harder to see the changes her daughter is going through, until her teacher (Patricia Arquette) is able to point them out.

Additionally, a middle aged hispanic individual nicknamed Mission Impossible (Eugenio Derbez) is a part of both of their lives, and might be willing to fix there situation at any cost. 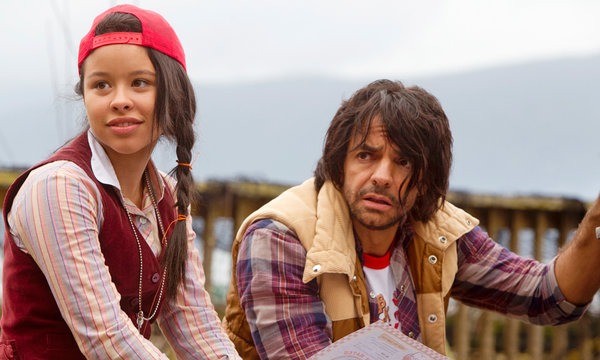 The real star of the movie. Anyone else think he looks like a Hispanic Matt Berry?

So what happens when you get a coming of age movie, about a girl attempting to create her own coming of age story? Well, it could either go amazingly well, or amazingly bad as far as I can tell, and I think this film falls on the latter. I wouldn’t describe any of the main cast performances as bad, but it actually just felt like they didn’t care.

That Eugenio? He was excellent. A lot of it might have just been in his facial expressions, but he is really the only person who made me enjoy the film. Although the film itself is about character growth, it felt fake or forced the growth that occurred. Arguably, a forced growth in a movie about forced growth could also be intentional, but I doubt the creativity of the director in this case.

For a hilarious read, I suggest the outline on wikipedia of the plot. If anything, it makes my writing look awesome, so clearly checking it out only leads to positives!

I have been told that The Other Guys was a great movie. By looking at the cover a long time ago, I assumed that was not true. This also came out around the same time as Cop Out, so I need to spread out my police cop comedy thrillers. Cop Out seemed to be a good movie at the beginning, very funny, and try and turn into a more serious thing by the end, causing me to care less. The Other Guys, on the other hand, seems to be a comedy throughout, yet still, I lost interest. 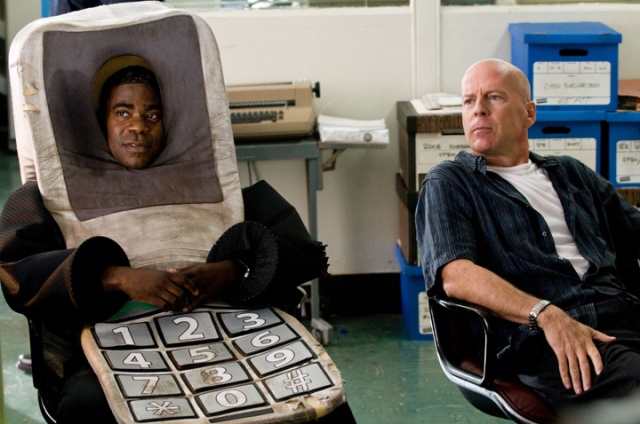 I am fine with this level of seriousness.

This movie starts out as an over the top action movie. Samuel L. Jackson and The Rock are chasing some criminals in NYC, and lots of damage get done. Sure, they had about only 3k worth of pot on them, and they caused 12million in damages, but who is counting? Crime has been stopped. They are heroes!

But the movie isn’t about them. It isn’t about Rob Riggle and Damon Wayans Jr. either, they are just normal guy. No, it is about the Other Guys. Will Ferrell, desk cop accountant who loves paper work, and Mark Whalberg, overly angry and paranoid detective who has to work with him.

The movie plot is pretty much, SLJ and The Rock end up dying with their reckless ways, and some people need to fill their shoes!

I loved the beginning, had me “lol”ing more than once. But as it got into the story (which was heavy on banking and monetary things, which is something I don’t understand well anyways), I didn’t get confused, I just cared less. Hard to describe it. The jokes did seem to get less funny, or be the same joke over and over. Eva Mendes and Michael Keaton are also both in this movie.

I also didn’t like Whalberg’s character. Normally in a duo, one is annoying, and one is normal. You take Whalberg to be the “normal” part of the pair at the start, until later when you find out he is way annoying. Always yelling and freaking out. Part of the design, but not one I liked to see. So to me, it started out strong, then just got okay.