Ohhhhhhhh Kevin Smith. A man who has embraced the Cartman Whatever, I Do What I Want mentality that so many kids eventually grow into and hopefully out of.

I like Kevin Smith, I do, but almost every time I see his name in the news I cringe. It is generally a rant about something in pop culture and an article is made about that. Kevin Smith doesn’t know everything about everything, as a fan and a person, I understand that. So I’d rather just see articles about upcoming films and work and casting like a normal director.

His films are getting weirder and more specific. They used to speak for a generation and now, backed up by his own words, they kind of just speak for him. He wants to make films for him and him only, the critics be damned. Except I really liked Tusk. I was very worried about Yoga Hosers, given a trailer I saw, but damn did I like Tusk.

I don’t care what he does with his free time (and I acknowledge his films have gotten weaker since he discovered marijuana). I just eventually want to see Hit Somebody, Clerks 3, and MallBrats, damn it. 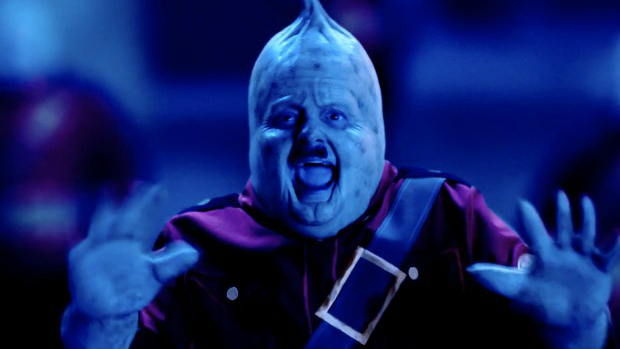 I did not ask for Smith dressed up as a German sausage, but I can see where he got confused.

Set a year or so after the events of Tusk, we return to our small town and our clerk employees who are now sort of famous. That’s right, because Colleen McKenzie (Harley Quinn Smith) and Colleen Collette (Lily-Rose Depp) helped lead the authorities to finding the missing American turned Walrus, they were in the paper once and their lives are just as uneventful.

Like, you know? They are just sophomores in high school, working a crummy job that Colleen C’s Dad (Tony Hale) got them. And his new girlfriend (Natasha Lyonne) is now their manager, ew yuck. They just care about their instagrams, their yoga (with a private instructor played by Justin Long), their band, and cute guys.

You know like Hunter Calloway (Austin Butler), a senior! And he has invited the Colleen’s to a senior party on a night they are not supposed to work, omg! As long as life doesn’t throw a hockey stick in their plans at least.

The Colleens just want to be normal girls, doing normal things. But un-normal Nazi related things are brewing in their neighborhood and it might just be up to them and their yoga to put a stop to it. 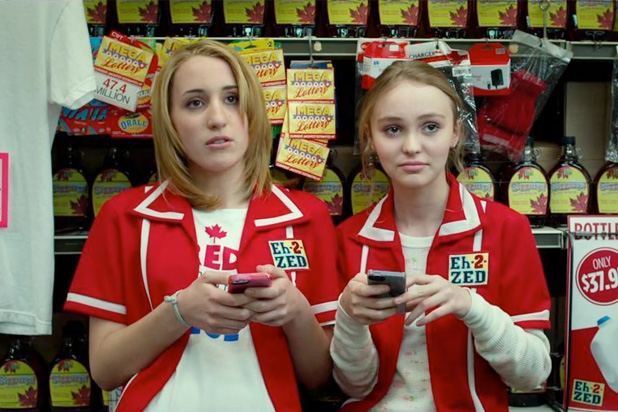 They weren’t even supposed to be here today.

When I say critics be damned, I really mean that. Smith refused to screen this film for critics. No pre-screeners for the press, no press copies online or in the mail, nothing. Just people who wanted to give him some money. And there is a reason behind that besides the obvious. At two points in the film, including a major part of the climax, are anti-critic. They go decently hard into and its the reason for the bad events in the film.

And, I dunno, am I supposed to care? This isn’t the first time there have been jokes about something that has represented me in a film. If a film makes fun of men, or white people, or nerds, or teachers, or geologists, I don’t rail against it and call it trash. If it is done in a funny way, I will find it funny, laugh and move on.

They were done in okay ways, but given the director’s actual statements, it makes it just come out as childish.

Related, the film is entirely childish. It doesn’t mean there aren’t amusing parts. Oh no, I laughed at a few. And I laughed at some small bit parts just for a quick joke. But the film is also all over the place. The trailer that turned me off so long ago? It was one part of the movie and that part took a long time to get to. The ending included a cool creation, but its demise wasn’t worth the time invested to get there.

But you know what? Johnny Depp as Guy Lapointe is still one of my favorite things ever. I will watch 10 more of these Canadian Smith films just to go on his adventures. Lapointe is Depp’s best work in years and that is why Yoga Hosers is worth a watch. Too bad it is out of all theaters by the time this review comes out.