Wrong is a film brought to us by Quentin Dupieux, who is famous for the movie Rubber. Rubber is famous for being completely absurd, and a strange movie, but I ended up liking it. Knowing that, you should know that he is going for a very similar style to Rubber. So if you hated Rubber, just don’t even try this one. 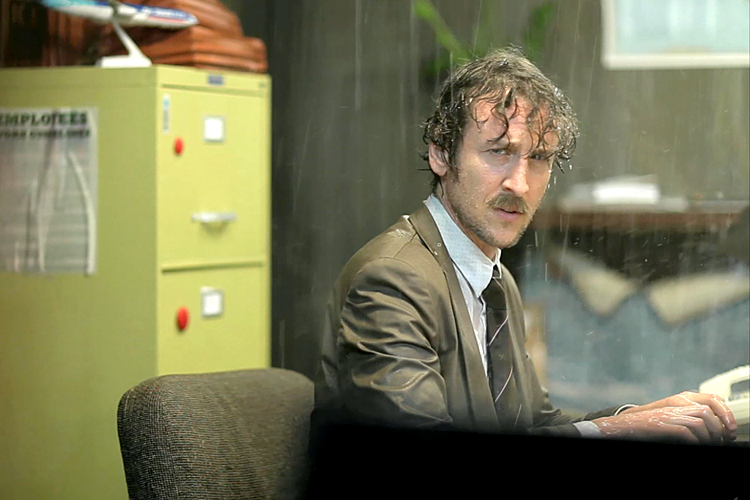 Same thing happens to me when I listen to Michael Bolton at work.

Poor old Dolph Springer (Jack Plotnick). Sure, he has a bitchin’ mustache. But he woke up to a very not good day. His dog ran away! Or was kidnapped. Either way, his dog is no longer there, and the world he lives in appears to be quite bizarre. Like his neighbor, Mike (Regan Burns), who goes on daily morning jogs, now refusing to admit to it. He hates running, why would he ever do that?

That isn’t the only thing. Police officers are unnecessarily rude, which might be a normal real world thing. His work office has a downpour going on in the inside, but that is apparently normal too. He might not even work there.

But his dog is missing. That is what is important. Not his conversations with a lady working a new pizza place (Alexis Dziena), or his gardener (Eric Judor). It turns out that the dog may have been taken by a group who randomly steal peoples pets, to make them truly love them. Strange. Yes. But Master Chang (William Fichtner) insists that it makes peoples lives better in the end. Unfortunately, mid kidnapping, the driver got into an accident, and died, and the dog escaped. So the stolen dog is lost.

They hire a private detective (Steve Little, aka Stevie Janowski) to get on the case, and Dolph just has to keep on living. 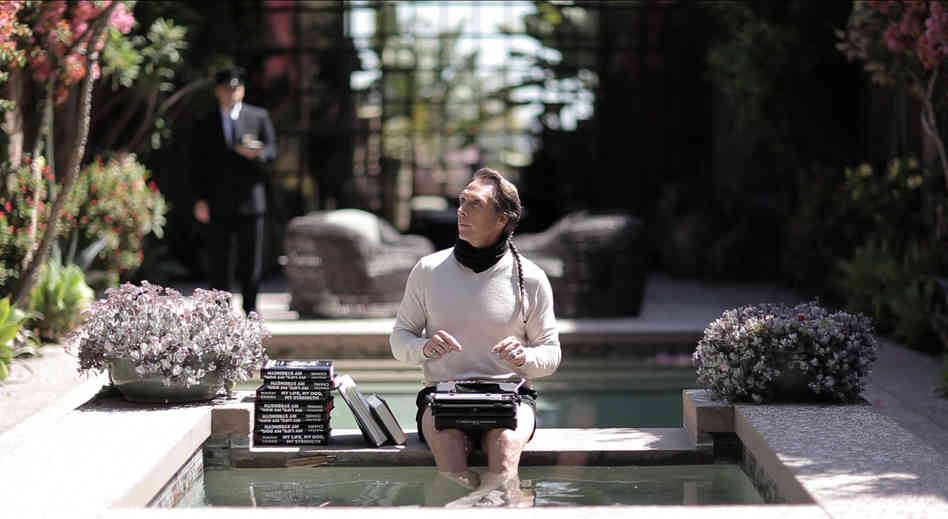 The hardest thing to believe in this movie is that he would write a novel, on a type writer, by water.

At this point, I am not sure if absurdity is really a film genre, or if I like it. Anyone could come up with an “absurd” movie, and call it art, even if it makes no sense, with weak plot or acting, and just bizarre antics. I am not saying that is a good description of Wrong, but close. I would say Napoleon Dynamite was an absurd movie, and one I dislike for its lack of real plot.

I definitely think I got less out of this movie than with Rubber. Rubber draws you in with the strange sounded plot, and I believe, delivers an even stranger movie. The plot description for Wrong just sounds pointless, and probably the only thing drawing people to this movie is knowing he made Rubber. It definitely has its extreme moments of weirdness, but not enough for me to love the movie. There were some great scenes. I loved the scenes with the Private Investigator. The gardener had an interesting arc, but the ending of it felt a bit weak to me too.

For all I know, the entire movie was just made to troll people. It might be a test to see what people can draw from it, calling it a highly intelligent movie, so that Mr. Dupieux can come out in two years and go “hah, just kidding.” That would be fun.