At first glance, one would look at this movie and think “Hey, that reminds me of 127 Hours. Kinda”. Yep. Kinda. Story mostly involving one dude, trying to escape from an impossible situation, and it sucks. Unfortunately, 127 Hours had a bigger budget, and also based on a true story.

Wrecked starts off with Brody waking up from the crash site, dead people around him, stuck in his seat. 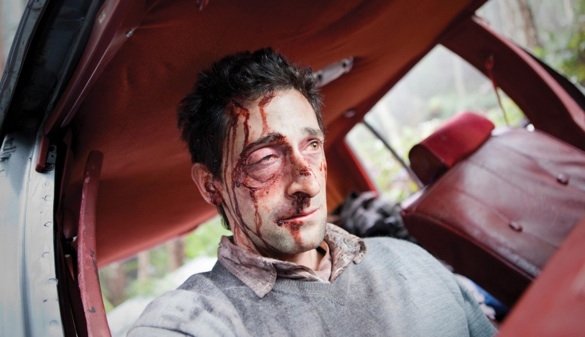 He of course has some sort of amnesia, and has to both get out of the valley, and figure out who he is. The movie overall was kind of boring though. Although some nice hallucinations occurred to try to keep it more entertaining, and there was a nice dog for him to talk to. There was no story line before Wrecked began, as it was figured out as his memories returned to him slowly. So while Brody was left feeling confused for most of the movie, so were the viewers. Not in a suspense way, more the annoying way.

Wrecked just seemed too long. It is hard for any type of character development to occur when someone doesn’t actually know who they are. The eventual reveal at the end wasn’t exciting either. Felt super let down.