Can’t stop, won’t stop. That is how I live my life. Every walk a strut. So why not a movie called Won’t Back Down? That shit appeals to me. Only time I will back down is when the ref tells me too cause I am too awesome in a fight. Alright that’s a lie. I wouldn’t back down then either. 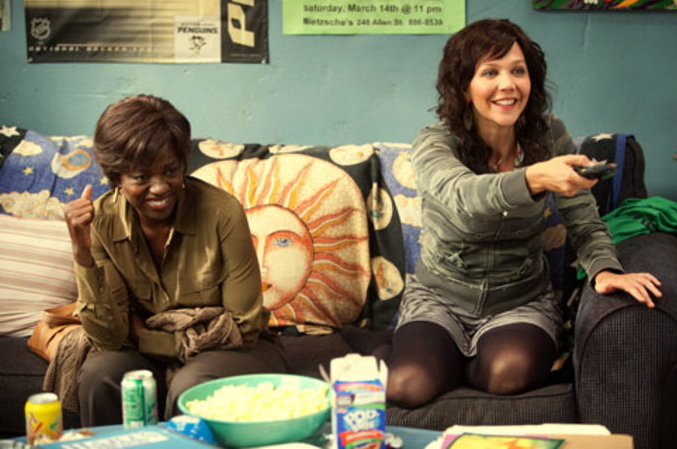 Determination to finally get off the couch and you know, sit on a couch.

Jamie Fitzpatrick (Maggie Gyllenhaal) is not your ordinary mother. You know that, because she says so multiple times. Her daughter (Emily Alyn Lind) has dyslexia and now because they are so poor, she can not keep her in the private school even with aid and has to go public. Public schools give no fucks, because this is another random one that has a tenure policy. So they get that and well, do nothing else and barely try to teach. Leaving the daughter to be dyslexic and unable to read.

But she wants to change that. First by bugging everyone but no dice. But when she hears about a parent/teacher takeover for a school, that lets them get rid of unionization if half of the parents and teachers are for it, and develop new rules and principals and teaching methods, she gets all excited. But why would teachers give up their safety net? Well, because some of them care I guess. Nona Alberts (Viola Davis) feels bad about her son (and divorce with her husband, Lance Reddick) and just goes a long with it. Jamie even seduces a teacher who still cares to join their cause (Oscar Isaac) even though he likes unions and doesn’t like being put in that spot.

So despite the fact that they even say most schools that go through this begin to fail again after six months, will they somehow pull off the whole process and fix everything in two whole months? 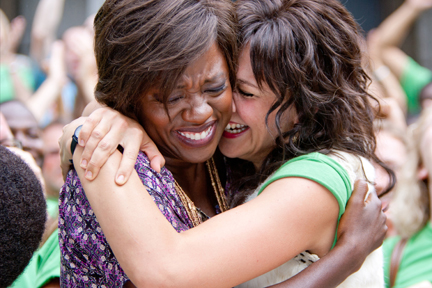 But wait. Does the movie end after they successfully win their resolution? Yes. But it only shows the school a few months after summer break and its fine. Not years later. Most start to fail after six months. They didn’t even show past that threshold!

But they showed a whole lot more. Two hours of movie at that. First off, time was confusing. I was sure they were setting it in early 2000s, but had all these Penguin/Steeler references after 2008. It said inspired by true events, which is another bullshit term. Schools have gotten better through this is all. It is super one sided and makes fixing a school seem easy as crap.

But more importantly, it is based on a fucking incorrect Gandhi quote. He never said be the change you want to see in the world. Stop it people. Stop giving that to Gandhi. It is a lie! Every time a movie uses it, kittens die. That is all I am saying.

I wish I just watched Lean on Me again, would have been better use of my night!

1 out of 4.
Tags:1 out of 4, Drama, Emily Alyn Lind, Lance Reddick, Maggie Gyllenhaal, Oscar Isaac, Viola Davis, Won't Back Down