I just think we need to be apart for a bit. I think there is a disconnect, a dethering, if you will. But overall, I want to make it clear, it’s not you, it’s…Us.

That was me talking to all the other movies I could have watched recently, but knew that nothing was going to stop be from seeing Us. The second movie directed/written/produced by Jordan Peele, who gave us the wildly great and successful Get Out two years prior.

This sequel is incredibly different with its theme, and probably “subtle messages”, and that is wonderful. It can be hard for directors to try new things, and Peele is ready to branch out right away. For example, Us looks a lot more like a horror film than Get Out did, so I expect to be much more of a bitch while watching it, and hiding from the screen in front of me. 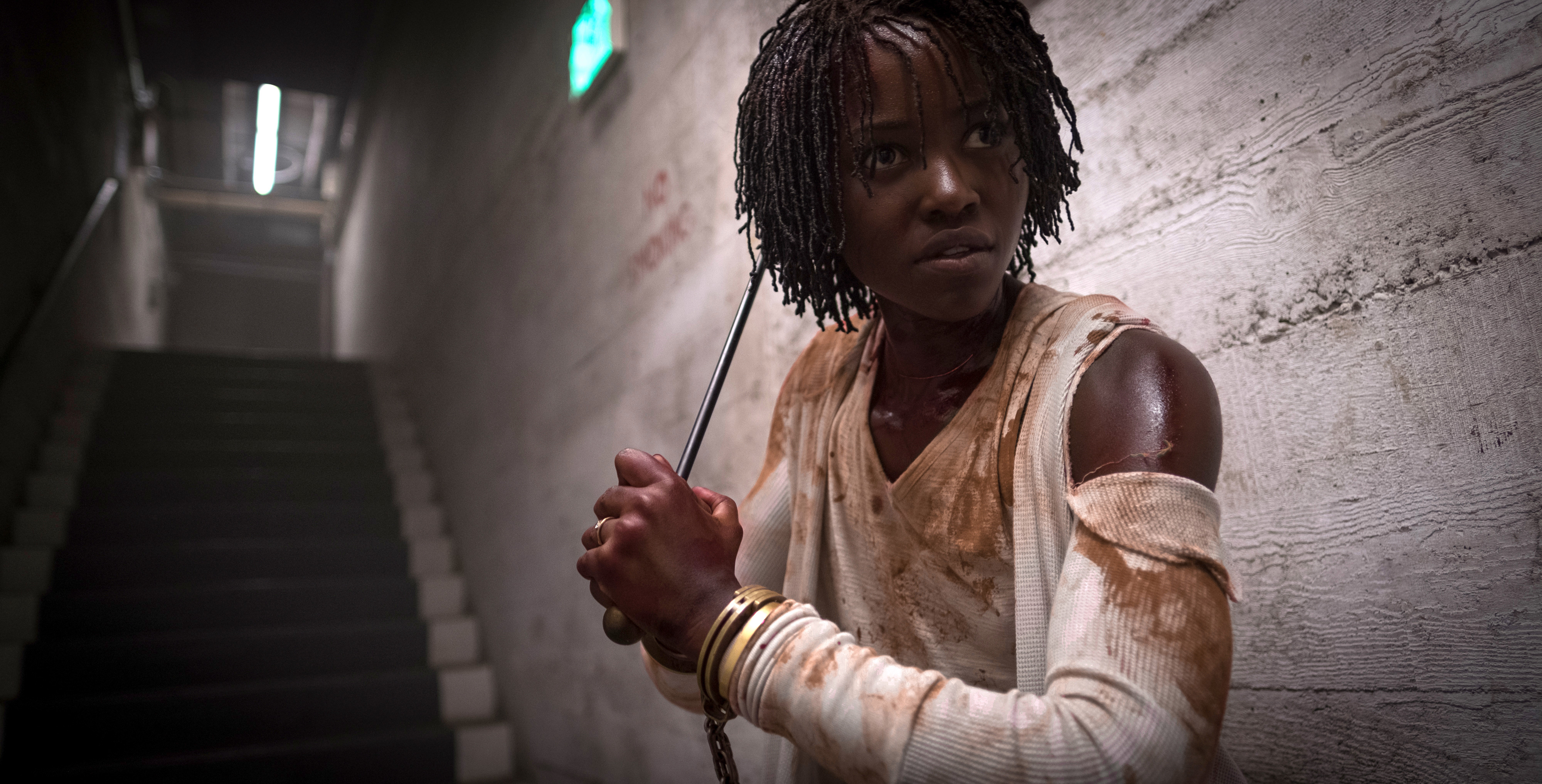 This is me ready to face the scares of the movie (If the movie was the staircase).

Adelaide Wilson (Lupita Nyong’o) and her family are relatively successful in life, and able to enjoy some of the finer things. Her husband (Winston Duke) is very outgoing and funny, her daughter (Shahadi Wright Joseph) is in track, and her youngest boy (Evan Alex), sort of a weird one, likes magic and masks and playing jokes. They are at least wealthy enough to go on vacations to a summer home that they also own on a lake. Okay yeah, that is pretty wealthy. Two homes? Like, one they don’t even rent out because they have a lot of personal belongings there that they can just leave all year. Really nice.

Well, Adelaide doesn’t like that area. The lake is fine. But in a nearby city, she had an incident in her childhood that changed her life forever. It scared her. Made her sheltered. All because she just wandered off.

And why did they have a vacation home near a place she fears? Eh, friend pressure probably.

Regardless. That night, some goddamn people in red bodysuit outfits show up outside of their residence. And they are mean, they look crazy, they have weapons and large sharp scissors. And they look just like them. 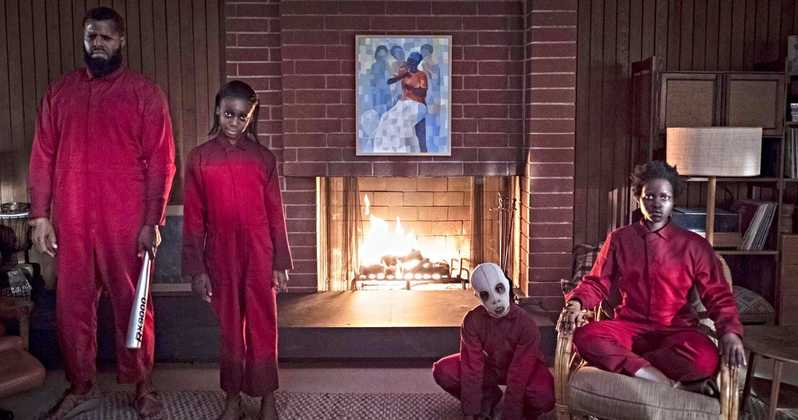 So much going on in Us, so little place to discuss. First of all, this is the sort of film that will invoke better discussion once it is seen and can be freely talked about without a care for spoilers. So any of that cannot take place in this review. Trying to throw out what everything means or represents, which I have already seen and heard a lot of theories. Some bat shit, some not. That is great for any movie.

Instead, lets focus on other things. Namely, the score. Holy shit, there was some good music in this movie. Haunting, pulls you in, and really fills you with that sense of dread. Getting stabbed with scissors can be scary, but they made those scissors extra scary. The camera work was top notch, we were able to see a lot despite most most of the “action” taking place at night. They didn’t hide what was going on. Well, they did hide a lot of the gore that they could have showed. We got blood splatter, and off camera kills that are left to the audience to fill in some of the gorier blanks.

I loved loved loved Nyong’o in this. She had a lot of power and works really well in the horror genre. Duke, who has been in like, three movies now and a small role in Modern Family, has a big screen presence and does a lot to both lighten the mood and protect his family the best he can. I also think the two kid actors did great. Shoutout to Moss for being in her second doppleganger film as well.

Overall, I do think the story gets a little bit muddled at times. I think the direction goes more places than one would expect, and so it can’t focus on a few aspects to make itself truly great. This is scarier than Get Out, but not as deep. It is still a solid film. Some people hate the ending, and I admit, I didn’t love it for various reasons, but I think it didn’t detract from the movie as a whole.