Schumacher (or the destroyer of Batman (Yes, Batman can be defeated)) has made a lot of movies. From the “classics” of Lost Boys and St. Elmo’s Fire, to more “Recent” movies I enjoy, like Phone Booth and Phantom of the Opera. So why not try a new movie with him, involving half of the Scream 4 cast.

Schumacher can do what sharks cannot!

Anyways! This is slow paced movie, that has a few different plotlines. Majority seem to be upper class white kids in the New York City, with the main character being a very good drug dealer who doesn’t actually do drugs. For the first half of the beginning, it seemed like the introductions were lasting forever, but at least I paid attention to that(Read: it was interesting). After that, the middle, I was kind of bored, as it tried to weave all the stories together.

The ending was pretty good though, as I kept waiting for everything to burst. It took awhile, but when it burst, it burst hard. Acting wise, most of the people were very good and believable in their roles. I think the moral is also “Drugs are bad, mmmkay”, which is a better moral than stop being a lame upper class white kid. The narrator was Kiefer, and it was hard to not imagine him just kind of creepily standing off to the side and saying things. That’s what I imagine him doing in real life anyways. 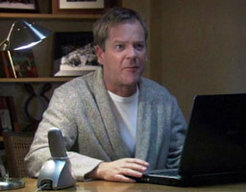 Or writing it up as one of his memoirs.

Overall, could have been better. Based off of a probably better book. And uhhhh. People may die in this movie. It may be 50 Cent‘s fault