Now that I have a new baby, my wife and I are trying to figure out what her future will be. You know, will she be good at sports or school? Will she be a gymnast or a singer? Will she like bugs or kitties? You know, the normal things. Because if a parent can do anything, it is force their own ideas and beliefs onto their baby and shape them how they want, right? I think that is right.

So I definitely wanted to see the documentary Trophy Kids. I figured it would teach me how to make my child into a future super star. That way she can earn millions of dollars doing sports stuff (Even though no women outside of like 5 make millions I think) and I can retire early because of it. That sure would be swell.

But of course that is not what this documentary is about. Hell, it isn’t about athletes who were Trophy Kids or Trophy Kids currently in training. Nope, it is about the parents. It is about the lengths they will go to for their child to succeed. And by lengths, I mean how dickish, angry, and abusive will these adults be to their kids in order for them to be scared into doing things correctly.

After all, yelling at your kid five feet away from them, in the stands, and on the side line will totally improve their performance. It is easy to listen to your parents shrieking voices with all the other sports distractions around you.

In Trophy Kids, we examine several different sports and aged kids, and how all their parents are more or less the same. 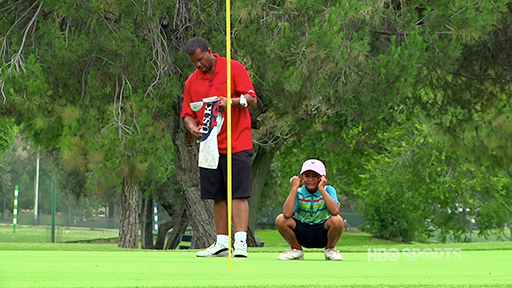 There is no crying in baseball, but there is crying in golf.

The one parent who is slightly different from the rest was a very religious mom with twin boys, who was training them to be future Doubles Tennis champions. She talked a lot about Jesus and their path, and they were all freakishly nice. That one wasn’t too bad I guess.

Everyone else? A guy who divorced his wife and forced their kid to move with him in high school to focus on his football training. After all, his wife is making him too feminine. Pictured above is a dad with a golf prodigy daughter who could put and hit at 3 years old. She doesn’t like him as her caddy.

And the other main story is dealing with two dads who have sons in high school basketball. Since their youth, they have had personal trainers, height training, and of course actual basketball training. Basically a full time job. And their dads get to go and yell a lot during high school match ups and get coaches fired. Thanks dads!

The documentary starts off a bit slow but ramps up after a halfway mark. Hell, if they could have just spread out a lot more of the intensity, this might have ended up as a 4 for me. There is one extremely powerful scene with the football dad in a car ride. It starts off simple and then suddenly everything is switched to 11, and suddenly, child abuse. It was surprisingly how long that scene in particular was and how messed up in the head the dad actually ended up being.

But really, shit, I just feel bad for the kids. They all want to do good and live up to their parents expectations, but of course the expectations always get raised and they are never satisfied. It is sad for them and when we get to see where a few of them place after the fact, it is just sad. Damn documentaries, making me feel emotions.