From the start I think Tower Heist got a lot of bad publicity. Why initially? Because it planned on releasing itself for download only a month after going to theaters, before coming out on DVDs. Apparently a lot of theaters were mad about that, and were refusing to show it. So of course it backed down.

But then after that, people are generally “Ben Stiller? Gross, next.”

That is the face Ben Stiller makes every time someone walks away and calls him gross.

I think the trailer did a bad job of explaining the overall plot. So here we go. The Tower is actually some large sky scrapper building in NYC, that is basically just apartments. Large staff, super secure, and they don’t accept tips.

Ben Stiller is the overall manager, runs the day to day, keeps his staff in tip top shape and helps all of the top clients. Casey Affleck is his second in command. Matthew Broderick is a formerly rich guy getting evicted and divorced, Michael Pena plays an elevator operator, and Gabourey Sidibe is a Jamaican maid.

And they all get fucked over. The penthouse belongs to rich wall street investor Alan Alda. And he has just been arrested for stealing investments, and getting people trapped in Ponzi schemes. And he also handled everyone who works in the Tower’s pensions!

Stiller gets mad. And he takes it out on Alda’s apartment (as he is now stuck there for temporary house arrest), getting himself and other fired. He then takes the drunk advice of a special agent on the case, Tea Leoni, and decides that the old school method of pitchforks and mobs to storm the castle were appropriate. But instead of storming, they should rob him.

The amount of money he should own versus what they found didn’t match up, so it is likely that Alda is hiding a batch in his apartment, in a safe in a secret wall. Can his team get the maybe 20 million dollars in the safe, escape without jail time, and divide it up amongst the workers to get their money back? Not without a criminal. Thankfully Stiller “knows” a guy, Eddie Murphy, who steals shit! 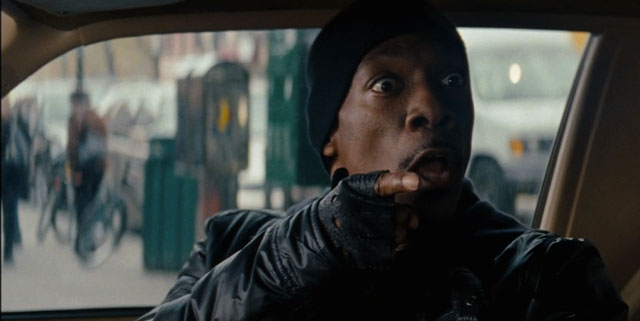 Seriously. Eddie Murphy is hilarious in this movie. This is best classified as an action/comedy, despite the action not being that much, and the comedy not being…that much. Oddly enough. There was only a few times I really had a good laugh, some of Eddie Murphy’s scenes, the thing about lesbians, and a few others. But I could just classify it as a “movie” and maybe that genre is specific enough.

But I really enjoyed it as a whole. When I saw the preview, I assumed it wasn’t an apartment, but just some big corporation in NYC. I assumed they were people who had lost their jobs due to budget cuts, and I assumed Stiller used to be a big fat cat, but got screwed over. But they really do a good job of making you feel for and root for them. There are many other workers at the building who aren’t part of the thievery, but they show enough of why their lives were affected by it.

Some jokes and situations, sure predictable. But not all of them, nor the ending really. I was surprised that I liked it that much.