Rethinking Barbie?! How can I rethink a barbie? As a man, with daughters, I am trying my best to make sure my girls are well rounded individuals, exploring many different types of toys and sure, some dolls. I want to make sure they don’t grow up thinking they have to be one type of girl. The girl who plays with dolls, the girl who dreams of being a passive princess, the girl who might just want to be a housewife (nothing wrong with that last one, but it is important for them to know options are available).

So I have never given my girls a barbie doll. Other people have, when people are lazy at gift giving. She still has a ton for absolutely no reason. I say no reason, because why do they need like, 8 barbie dolls? People not thinking give her one every birthday, every Christmas, and sometimes multiple ones, because it is easy to just grab a barbie and send it over. I mean, its a girl toy! Girl toys are dolls, and boy toys are everything else (including different dolls).

It is completely fucked up. But I still went into Tiny Shoulders: Rethinking Barbie, letting my mind me somewhat open. Come on, tell my why Barbie is progressive now. Tell me everything I have learned through slight googling in the past is a lie.

See? I am a willing participant! 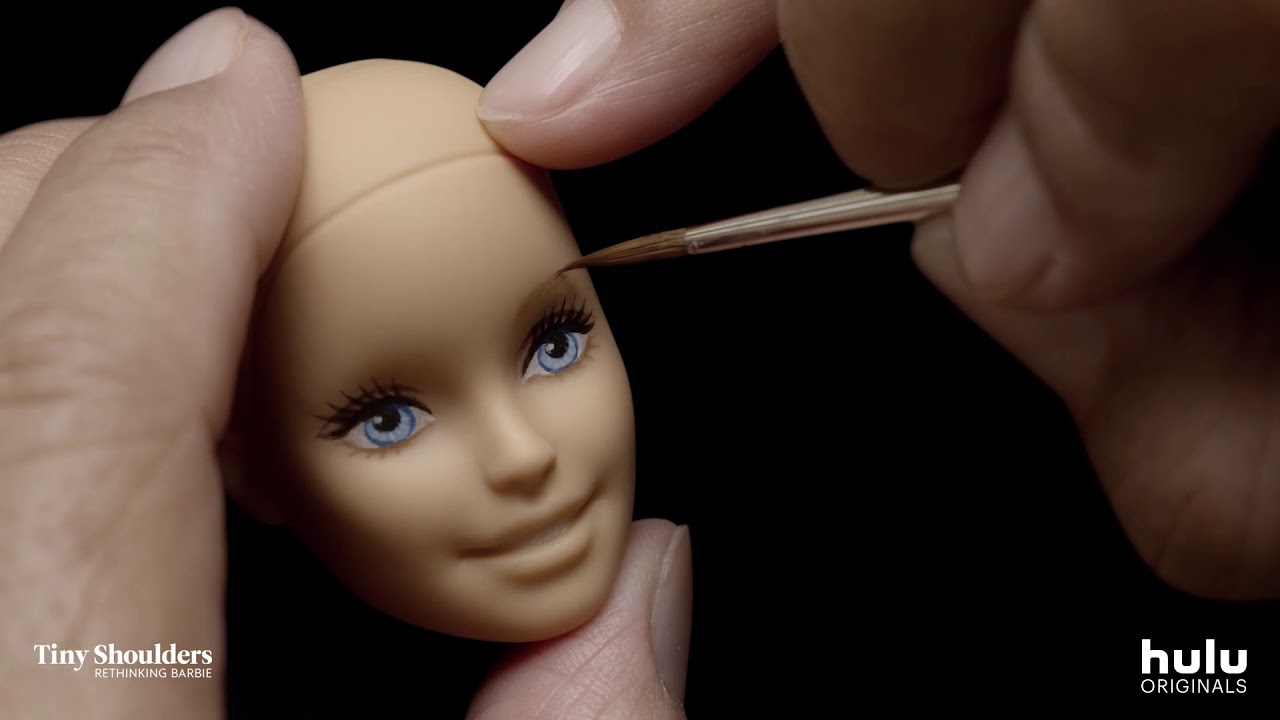 “Couldn’t you have picked a less creepy photo for this review?” No.

This documentary has two goals. One, to give a small history of barbie, to show how it was a trendsetter back in the day (first doll with boobs!), how it didn’t want to be a perfect women archetype, to the eventual feminist backlash. Their idea was to make sure Barbie had all these jobs so that it could encourage woman to live out fantasies and achieve these dream jobs, not just be a homemaker. And of course, modern, modern backlash over its unrealistic proportions and body image notes.

And that is where the other part of the documentary comes into play. Actually trying to change the way Barbie looks and the problems that have come about. You see, they have been trying to change her appearance for some time to better represent more realistic people. But they have had plenty of focus group issues. They have the issue that the model rarely ever changes, and by having a change, that creates accessory issues, and is the change worth making it so they need various sized outfits/accessories for every release? (More expensive for them and the consumer).

Add to the fact that they don’t want people to think they are pandering to an audience and doing too little too late. They have one shot to try and redefine Barbie so that she has various body types, a task they can’t just do every year in case they mess up. They have to make a statement and they WANT to make a statement.

Strangely enough, this toy redesign happened in 2016 and I really didn’t hear about it at all. There are four different sized barbies at this point, did you know? I didn’t. I remember when they made a lot of hooplah about the different races represented with their barbies, which was a good change, but for whatever reason this redesign was never put in front of my eyes.

I found the whole story to be compelling and it was good to see a company full of people who cared. They cared about the repercussions of their decisions and they wanted to help make the world feel more inclusive. I still don’t think I’d go out of my way to introduce different sized barbies to the kids. My wife told me we actually had different sized ones, so that is how unnoticeable the changes really were.

But this is still a good story of a company trying to do good, and coupling it with a history that I knew nothing about, makes it a compelling story.