No, this is not a The Hangover reference. This is just a group of brothers who are best friends who love movies.

The Wolfpack, a term never really applied to them in the documentary that I remember, is about a group of best friend brothers because they literally have no other friends. How could six brothers have no friends? Well, they lived in NYC on the 16th floor four bedroom apartment and they aren’t allowed to leave.

That sounds crazy, and it is. Their dad is the only one who left the home for any real amounts of time and the only one with a key. The mom was a certified teacher and homeschooled the whole family. They maybe were able to leave the apartment a few times every year, but some years they never had the chance to leave. None of this is technically illegal, because no one was chained up, they weren’t being abused, they had a loving house hold apparently. The dad was just very paranoid and protective.

So the brothers Mukunda, Narayana, Govinda, Bhagavan, Krisna, and Jagadesh, and one sister Visnu, looked to each other for companionship and social fun. They also turned to film. 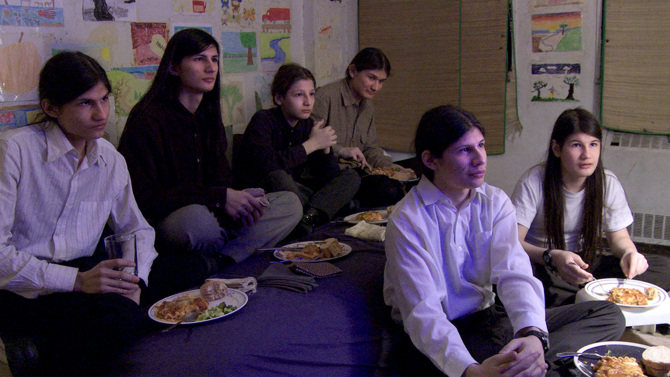 Sounds like my life, except I was allowed to leave home and chose to stay inside.

FILM. A big part of their lives, as the dad was able to buy a lot of bargain DVDs and VHS tapes so they watched a shit ton of movies. They were able to get a lot of the classics and every single kid loved movies with all their heart. Hell, they loved them so much, they even recreated a lot of their favorite films. They would write down all of the dialogue, make a script, give each brother and Visnu a part, design costumes of varying quality and film the whole thing scene by wonderful scene. Tarantino films mostly, apparently.

But hey, there is a documentary about them! That means something must have changed eventually, right? Of course. Eventually the oldest boy, while the dad was getting groceries, just decided to leave the house and explore, consequences be damned. And then their lives changed forever…The outside world is a lot different than the movies.

The Wolfpack is a weird documentary, in that you assume it HAS to end with someone getting arrested, or a murder, or something. Maybe a big philosophical discussion about how to raise a kid properly. But no, it just ends with the family getting adjusted to society and having their children go outside once in awhile, discovering how the world is different than the movies.

As a movie watcher, I often find myself excited when I am watching something about movies. This feels like a more realistic version of a small plot from Me and Earl and the Dying Girl. Which means I was excited about The Wolfpack. But in all honesty, The Wolfpack was frankly overhyped to me. I expected something life changing after my watching. I expected to learn something poignant about family and film. But in reality, this was just a documentary about a strange family that was living with weird circumstances.

Yeah, there are interesting parts in it. It is amusing seeing them play out their film fantasies. But at the end of the day, it doesn’t feel like something I need to ever watch again or would rush out to show friends, like a truly great documentary.

A cool and interesting story, but not a lot more after that.