Obviously I have a wide arrange of movies readily available to me, and this is one of the first I had the chance to see. I passed it up though, at the time, because I wasn’t yet set in the “Watch everything always, damn it!” mind set. It just looked like it would be dumb, and cheesy. The Warrior’s Way is a nice title, but for a movie like this? Yuck! 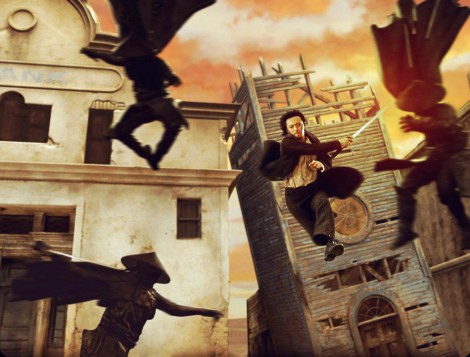 Dong-gun Jang (who will be Yang, from here on out) comes to a small town in the west, pretty empty, pretty much just a circus. He is a member of an assassin group, and wants to be the best swordsman in the entire world. But in doing so, he must defeat every member of an opposing clan, and when he gets to the last member, a baby, he cannot do it. He is outcasted from his own clan, and goes on the run.

At the carnie-town, he meats the mayor (Tony Cox), the local drunk (Geoffrey Rush), and a ill tempered woman (Kate Bosworth). After some time, (and training of some townspeople), The “Colonel” (Danny Huston) comes back to torture the town. He frequently raids them, and kills as he pleases.

Blah blah blah, he helps them fight back, gain the courage they once had. Eventually the assassins also attack, which makes the fight more fair for the town (as the two groups fight), while Yang tries to kill evurrybuddy up in this joint (minus the carnies). Redemption is eventually had. If you want a stupidly long plot summary, for some reason they wrote a book about this movie on Wikipedia. 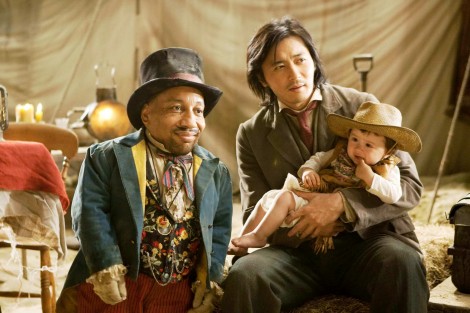 Awww, look at the baby.

Alright, so the plot is pretty bad. The acting, not the best either. I am pretty sure the entire movie was filmed in front of a green screen too, similar to 300. Nothing seems real, and I think that takes away from the experience of really getting into the movie.

But the fighting. OH MAN THE FIGHTING. The action scenes in this movie are the only thing saving it. Yes, a lot of it becomes “CGI fighting scenes”, but they spent a lot of work on them. Probably all of their work on them. Even the small skirmishes were visually entertaining in the movie.

I am not saying this makes it a great movie, by all means no. But usually a “2 out of 4” means it is okay, or worthy of only one watch (as you probably wont want to see it again). This is more so the “one and done” method, not the decent method. I’d say watch it cheaply if you can for the fight scenes, with a bunch of people. You will go “ooh” and “aah” like trained seals.