At first I thought The Ramen Girl was going to be one of Brittany Murphy‘s last movies, but she still had 5-6 come out after this one. Bah! Now I have to watch Something Wicked, that wasn’t released until this year. 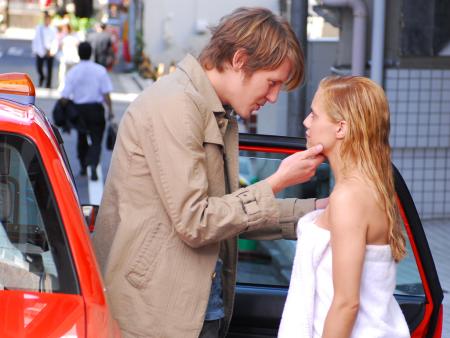 Abby (Murphy) is a girl who has recently moved to Tokyo! That is in Japan! She is super white and blonde and stands out a bit. But whatever. She has a job at some office, but they rarely use her, so her days are boring. But at least she has a boyfriend she loves and lives with! Who then has to go to Osaka for business and it might be awhile before he returns. She wants to go too! He says no. And a break up.

Awk. Now she is alone in Tokyo, doesn’t speak Japanese yet, and you know, crying. But she sees a Ramen shop nearby, and it looks enticing. AH FUCK ITS CLOSED. DAMN IT. NOTHING WILL GO RIGHT RARWRAWRWAR.

Because it is hard to ignore a crying white woman, the shop owner Maezumi (Toshiyuki Nishida) and wife Reiko (Kimiko Yo) open up and let her have some ramen. Probably the best thing she’s ever had in ever. She starts going their daily, being the highlight of her day. One day she realizes it is apparently a difficult craft to be the ultimate Ramen maker, and she wants to learn to do it. Damn it.

Especially since she hates her job, she convinces Maezumi to become her Sensei in the art of Ramen, willing to spend her whole day at the shop to learn the craft. Might even find a nice Japanese boy who can speak English, like Toshi Iwamoto (Sohee Park). Yeah, that’d be good.

But more importantly, can Abby become the ultimate Ramen chef supreme? Or you know, just start using those 10-20 cent ramen packs with flavoring. Those are pretty awesome too. 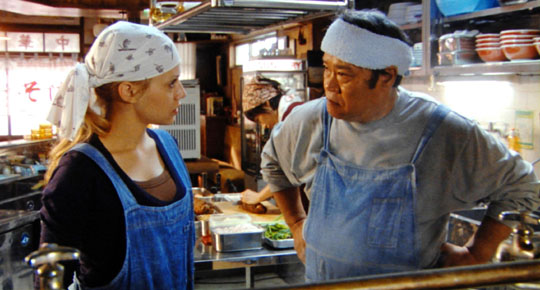 Wash Off, and Wash off some more. This is time to clean.

So if you couldn’t tell already, this is pretty much The Karate Kid, meets cooking noodles. Frankly, I think the entire point of the movie is to tell Americans that Ramen noodle cooking in Japan is a serious business, and takes awhile, and the shit we have here is shit.

But I still don’t buy it. Can’t fool me Japan. It’s just noodles in broth, with seasoning and stuff. Maybe plated sexy in a bowl. You can’t fool me, movies!

Overall it was an okay movie. If for whatever reason you like seeing Brittany Murphy cry, she does that a lot in the movie. Every once in awhile, while laughing, I could hear “Luanne” come out of her, and that was odd. But a mostly predictable story, where Murphy cries and gets hit in the head a lot. But never gives up, damn it.

2 out of 4.
Tags:2 out of 4, Brittany Murphy, Comedy, Drama, Kimiko Yo, Sohee Park, The Ramen Girl, Toshiyuki Nishida