But I know there is a lot of potential in this as a franchise. Especially if they don’t try to tell a single story over and over again in different films. Give me different characters, different unique settings, and see how this shit went down. Maybe, just maybe, eventually give me that prequel film I know you are just dying to get out. But only one damn it.

The Purge: Election Year apparently wants to try and end it. They say this could be the final purge night due to (plot) reasons which will be noted below. But if anyone imagines this is actually the final Purge movie, they are probably delirious.

Oh well, I just hope they are more subtle about certain aspects than with Anarchy, where they literally had a no-name government character explain it all in the last five minutes of the film. 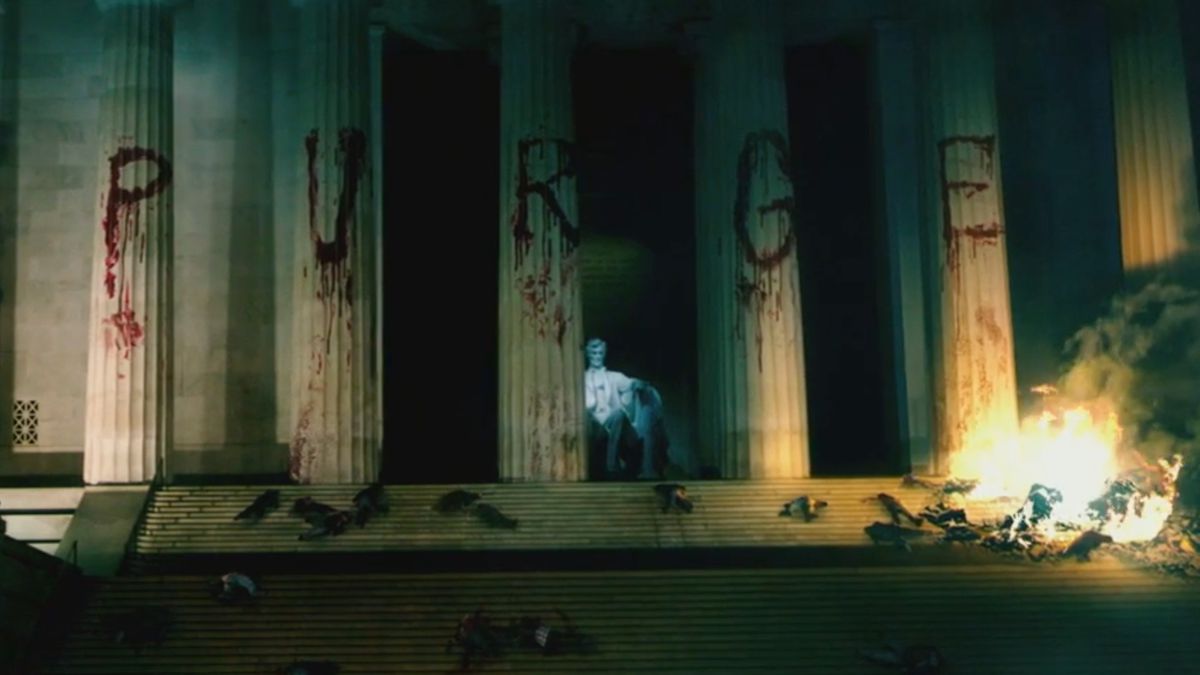 This one technically spells out the Purge for us as well.

Alright, I had to do a bit of math because they didn’t want to give me the year, but I think this is set in the year 2035. That is a really long time from now. The first Purge was in 2021 and Anarchy was 2022, so recurring characters are 13 years older and the Purge itself has been happening for 18 years. So alright, HUGE jump into the future, a lot of things happened I guess.

This is about Senator Roan (Elizabeth Mitchell), someone who has dedicated the last 18 years of her life to politics and ending The Purge for good. Why? Well, during the first purge (I assume, or else this takes place even more in the future), he family was tied up, tortured, and she was the only one left alive thanks to a sadistic game. Oh okay yeah, that seems like a good reason to hate it. She is an independent Senator, but people love her, and damn it, she is now running for president. She would be the first President that isn’t a member of the New Founding Fathers party since The Purge started.

She is running against a guy (Kyle Secor) who also is an actual Minister, for not so on the nose comparisons. Her head of security though is Leo (Frank Grillo), from that last movie! I mean, sure, this means that it is literally like a decade later or something, but whatever, he is still pretty good at thinking on his feet and killing bad dudes. But security isn’t too bad, what with the low crime rates and all.

Oh shit, guess what! There is a Purge in March, like normal! And the New Founding Fathers have heard the concerns of the citizens and decided to lift the clause saying that government officials Class 10 and Higher are no longer immune to the Purge. Timing is everything of course, because they want to totally just kill Roan and make the election an easy one. Roan of course refuses to go to an underground bunker and instead deck out her house like a normal American.

Oh and there is another plot. Joe (Mykelti Williamson) runs a grocery store and his Purge insurance premium went up thousands of dollars the day before the Purge. So now he can’t just let his store get robbed and get it paid for. He is going to wait up on the roof, joined by his business partner Marcos (Joseph Julian Soria). There is also a girl (Betty Gabriel) who rides around in a specialized ambulance to help out despite no protection. And a girl (Brittany Mirabile) who really wants a candy bar. And Edwin Hodge returns again, this time as the leader of the main resistance movement! 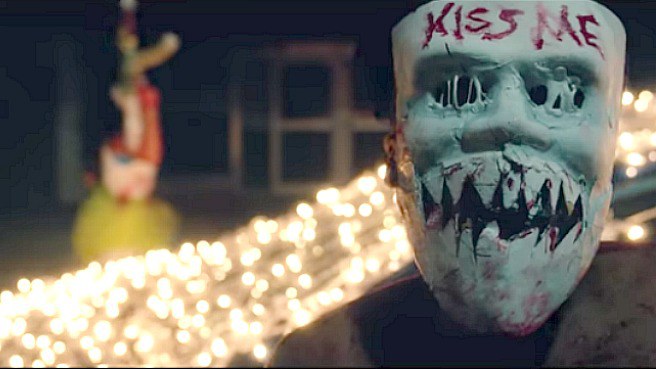 No one has been this obsessed over candy bars since Bill Murray in Little Shop of Horrors.

The Purge: Election Year is arguably the weakest film in the series, despite what people say about the first film. Horror is only sort of an element here, it is replaced even more with just bloody gun fights and action sequences. The horror scares that exist aren’t so much the depravity of human beings, but more just people jumping out of the dark.

I will say that this film does the best “world building” of any in the series. They had smaller elements in Anarchy, but on almost every street we saw glimpses of people purging in grotesque and eerie ways. It added unique moments to the franchise. On the other hand, all of the creepy and disturbing moments that are advertised in the trailers and posters are mainly bit parts in the actual movie. The people dressed like Washington, Lincoln, Liberty? That scene was maybe 2-3 minutes only. No, the real bad guys just came from an actual group of soldier like people just trying to get the Senator.

This film is also anything but subtle. Obviously they haven’t been doing a good job at it before, but it really doesn’t give a fuck this time around. We even get a board room scene of politicians trying to figure out how they will get back at the senator.

Here is a list of random weird things in the film: Election Day is apparently in May now, they show the results and call it somehow early in the morning when people just start voting, the movie seemingly glorifies gun violence while shaming the purge at the same time, an annoying amount of misplaced morality in the final act of the film.

But also, what the hell is this movie being set more than decade after Anarchy? What do they have to gain by forcing this story so much forward? I can only assume future Purge films are going to be awkward filler telling non related stories (which again, I am fine with), or even worse, tell us about a post-Purge America and just make this a slightly scary regular action flick. No idea their end game, but clearly they don’t either.

Election Year introduces some nice concepts. Like foreigners traveling to America just to kill and leave. And random acts of Purging. But it loses a lot of the horror touch and doesn’t know how to be subtle if their life depended on it. The movie is still an okay adventure for maybe a single viewing, but harping on morality without giving good reasons for it just kind of piss me off.