In the summer of 2013, there was a horror movie that ended up being surprisingly good. No, not The Conjuring. That was expected to be good and delivered.

I am talking about The Purge, which created its own unique concept for a movie and ran with it. What we got was a house survival type film, with some tense moments and a lot of twists. But more importantly, it created a world with a lot of potential. The Purge was just one families story, but they could set it in any number of settings, with any number of character types, and get completely different films and experiences out of it.

The possibilities are endless. Which is why I was excited to see The Purge: Anarchy, which is set in a city, and looks like it will feature a few different story lines that may intersect. A nice way to do it. Unless this one bombs, I hope they set one in a rural community next. A 500 person city or something. Maybe an island. Or a college campus. Classic settings for horror movies, but these ones have the twist that they involve “normal people” committing the crimes. Or whatever they want to do, as long as it makes me uncomfortable to watch. 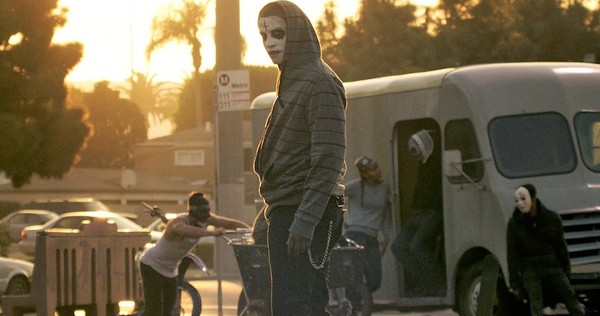 Jimmies are definitely getting rustled here.

Set a year after the first film, The Purge: Anarchy gives us a few different groups of people with different reasons for being outside. Like Leo (Frank Grillo) who has a decked out armor car and intentionally went out into the city for some Purge action. He has his reasons. He wants revenge.

Or let’s take Eva (Carmen Ejogo) and her daughter Cali (Zoe Soul). They definitely don’t want to be outside. But thanks to some soldiers invading their complex, taking people into the streets to be prisoners, they really don’t have a choice.

Or even the young couple Liz (Kiele Sanchez) and Shane (Zach Gilford). They had plenty of time to get home, even took the back roads to avoid the busy highways. But when a group of mask men tampered with their vehicle intentionally to leave them stuck in the city, well, they have to learn to flee or fight back as well.

All three groups meet up rather quickly in the film, allowing them safety in numbers to try and survive the twelve hours. Also featuring Michael K. Williams as a resistance leader, trying to get the poor to seize the moment and topple the rich and elite, who he claims use the Purge to secure their own positions in life.

These are the real consequences of P. Diddy‘s Vote or Die campaign.

Not only were my jimmies rustled from the early on pictures, but they literally were rustled almost the entire length of the movie. Let’s say five minutes in or so until the credits rolled. This isn’t disgusting like The Human Centipede is disgusting. It is disgusting on a more primal level, given that these are just regular average people of various ethnicities and backgrounds. That is what really makes these movies. If you don’t accept the movies premise on the basic level, you won’t be able to get into the atmosphere it creates and you probably won’t enjoy it.

I thought the movie was extremely tense. Despite common thought, having guns as a main killing weapon doesn’t turn a horror into an action.

The acting of course isn’t something to be admired. No Oscars will be won by any of it, of course.

Overall, I enjoyed the movie. Obviously. They are setting up bigger and crazier events in the future, pretty nicely. This franchise can have a lot of life left in it. But if you hated the first one, no way you’d enjoy this one.