Alright, this is an easy introduction. The Nut Job sucked. It came out January, 2014, made an okay money and a sequel was announced for January 15, 2016. Months before that date I noticed it and waited, because I was ready for an equally shitty movie that is easy to trash.

And then January happened, it was nowhere to be seen anywhere, and no one knew when it was coming out. It wasn’t until months later, April 2016, when it was announced it was pushed back to May 19, 2017. Yes, it wasn’t officially delayed until THREE MONTHS AFTER IT WAS SUPPOSED TO COME OUT. No announcements about being pushed back indefinitely, just quietly hidden under a rug. But I was there, I was asking the hard questions. I also don’t know when they finally gave it a name that was different, but they called it The Nut Job 2: Nutty By Nature, to appeal to…some demographic.

Three months later in July, they announced that Jackie Chan had joined the cast. He joined the cast six months after it was supposed to already be out. There is some real big behind the scene delays going on. It wasn’t until December of 2016 when it was pushed back into August 2017, where it moved around again once I think, but was kept basically the same.

What a production shit show. And to think there is a The Nut Job 3 IMDB page saying a 2019 release date, despite no official announcements at all. Who is in charge damn it? 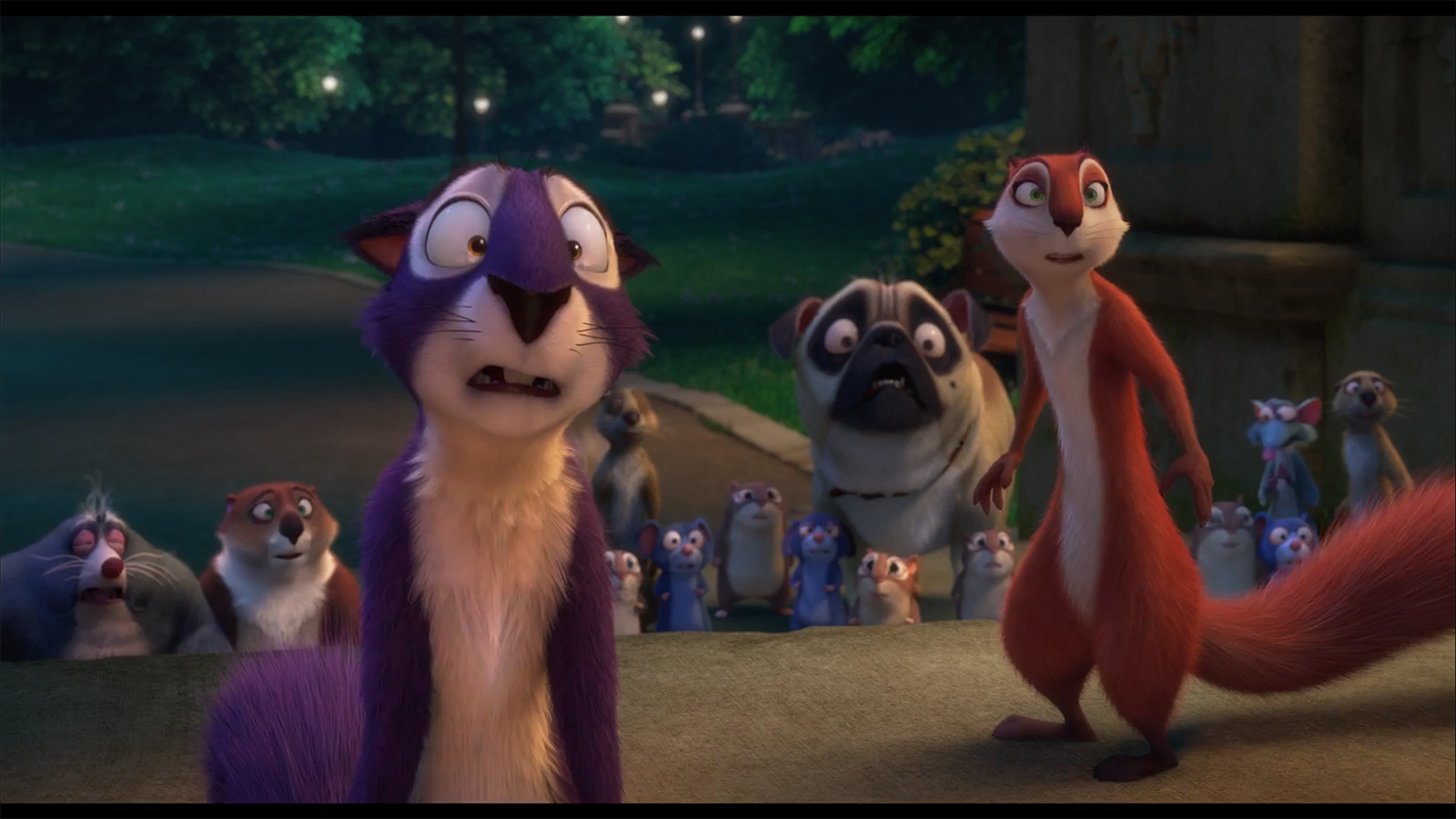 Ah, the fucking squirrels are probably calling the shots.

This sequel takes place a few years later with the nut store now out of business. And by that, I mean, it was being used as a mob den or whatever, so they probably just never got a new owner and it was condemned. And for some reason this condemned building was never removed of its items, so its basement was still full of nuts of all sorts. I assume it is a few years later, because literally none of the other squirrel and rodent leaders are present in this film, just our main character and crew and some young things, so at some point everyone else must have died out.

Now Surly (Will Arnett) and Andie (Katherine Heigl) are the de facto leaders of this group, I guess. And by that, I mean Andie is trying to teach some baby chipmunks how to hunt for nuts in the park, and Surly and his gang of randoms (Maya Rodolph, Gabriel Iglesias, Jeff Dunham, Rob Tinker, Kari Wahlgren, Tom Kenny, Sebastian Maniscalco) are living in the nut shop basement that has turned to a variable den of sin. Andie thinks they are losing their ability to succeed in nature. Probably true.

Also in this city is a corrupt mayor (Bobby Moynihan). He seems like he has been there for awhile though, based on the way he lives and talks. He keeps getting elected despite being openly and obviously corrupt, and a danger to the citizens. He drives along sidewalks and hurts people while displaying he is above the law, yet everyone is fine with i? Anyways, this mayor likes his city making money and says that every square inch of his city makes money except for one. This is when most people would say “Oh yeah, the abandoned nut shop”. No, he says the park. Meaning he doesn’t know about the nut shop either.

So yeah, he wants to put an amusement park on the park instead, to make money. He begins to demolish stuff, which would be fine because of the nut shop, but the nut shop also blows up.

Now the animals have to go to war with the machines and the amusement park and the mayor. Oh how nutty!

Also featuring Isabela Moner as the mayors bratty as shit daughter (no mom in site, mayor probably killed her to be honest), Peter Stormare as an exterminator, Bobby Cannavale as another dog, and Jackie Chan as a kung fu mouse leading an army of city mice.

That is a sweet ass sign, I would probably go there if I lived in the general vacinity.

“It was a mess of a movie.” – Gorgon Reviews, describing The Nut Job, in 2014. And it easily fits this review as well.

At this point in the review I am already over 700 words, and I haven’t even started to deconstruct its ass down yet.

I already alluded to it, but the mayor character cannot even exist in the world they created. Unless right when the movie starts he just got elected (despite implying longevity), and he was going on a two week crazy spree of fucking up parks and killing pedestrians. But we know it is a lie. For whatever reason this mayor character wanted to make the shittiest park, quickly, to make small amounts of money. But he is clearly a guy with high standards, so he wouldn’t make a park out of used parts, but something nice and shiny that people would want to go to for a long period of time. Another bad plot point.

The park premiers at a big fancy event for the mayor and all of his campaign donors, where everyone is dressed up, fancy as fuck, and rich. Except literally none of those individuals would ever set foot in a park like that. It is extremely ugly and they don’t try to hide it at all. It looks like a park that could give you AIDS just for walking into it.

The animals start terrorizing the park, the rich people hide, but don’t worry, exterminators come and get rid of them all. And the mayor makes these rich people stay. Of course animals quickly break out, come back to the park, and start to rip things up and destroy things with explosions. That point is weird though because 1) The rich people didn’t leave, 2) When things were exploding they carefully only showed the exterminators (who had already finished and should have been gone). Yes, very odd. Although they didn’t show them there, they specifically showed them staying, so a whole bunch of people probably died in this plan and they are just covering it because of badly written PG films.

Speaking of badly written, I am pretty sure that the movie was made, was worse, then they had to change a lot of it. Since Chan was brought in so late, they probably added his plot lines. He wasn’t in the film until halfway or so, and only one scene. Then he was brought back during the crazy end mess. I have to imagine that they just added this shit in, and that is why it was delayed a year and a half. A big waste of Jackie Chan.

The voice work is bad. The movie has absolutely no real feelings behind it. They just patched some shit together, hoping no one would examine to find out that there are holes everywhere.

And goddamn it, where is that little girls mom? Why was the Nut shop ignored by a money hungry government? Why the fuck does Andie the squirrel put up with Surly, who abuses her emotionally and puts her down in front of others constantly? And did the eat the other goddamn squirrels from the first movie?