The Mighty Macs is a sports movie! This time set in the 70s, and this time I will explain most of the plot before the first picture. Carla Gugino plays a woman who is finally getting to coach college basketball, at a Catholic school, for next to nothing. Very little supplies or support, and a ragtag group of girls. Her husband, David Boreanaz, or that guy from Angel/Bones who is also NOT Nick Lachey, is also an NBA ref or something.

Eventually she gets an assistant coach, a real nun, played by, Marley Shelton, and they come together unexpectedly to kick ass at basketball and win multiple titles. 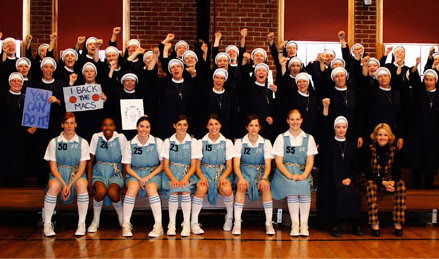 This could be a horror movie picture.

I think this whole movie HAS to be a joke. Honestly. First, the main two female leads, the coach and the nun. I am looking at their past movies and it just doesn’t fit from the religious stand point. Marley Shelton was in Scream 4 as random cop hottie, and in the Grindhouse movies. Carla Gugino was the main character in something called Elektra Luxx, an R rated movie about a Prostitute who becomes pregnant…and it also has Marley Shelton in it!

Outside of the glaringly mis-casted main stars, this film has applied every sports cliche it could think of. To be fair, it is set in the 70s, so maybe sports movie cliches are just based off of their season, and they now finally get a movie?

We have an outcast girl, who helps save the day. We have girl who goes through big tragedy, almost leaves, but stays and kicks ass (normally a death, this was just boyfriend breaking up with her). The Coach is doing it all for practically nothing and no support on supplies, or from her family. There is no support, because of course the school is going to close THAT YEAR unless something good happens.

The team doesn’t do good until they work together without the coaches help. The final rival defeats the team soundly earlier in the movie, but they get to meet again at the end. The rival team also has a personal connection to the coach. They are losing to the rival team until a nice halftime speech. Really, I could go on. 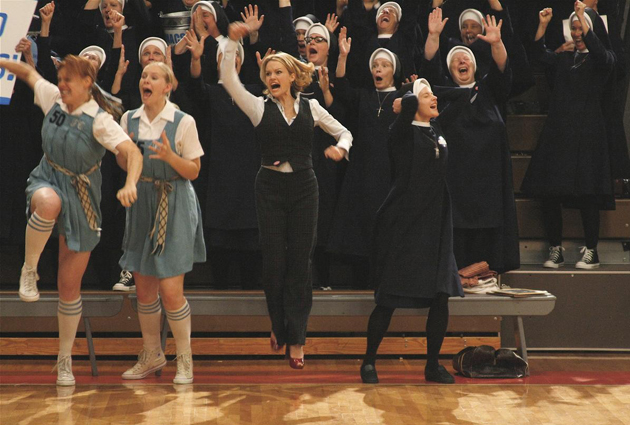 What bugged me is their outfits. They made a big deal about how “lame” their uniforms were, and they do look silly. Nothing like a normal basketball outfit. Yet in the credits it shows footage of their championship wins…and the outfits look normal.

I just don’t get why that would be exaggerated for the movie, if it was a lie. What the hell are you guys trying to pull?

1 out of 4.
Tags:1 out of 4, Carla Gugino, David Boreanaz, Marley Shelton, Sports, The Mighty Macs