I am excited to say that I had the opportunity to see The Lunchbox while traveling to a conference, completely unrelated to movies. It was en route, the right time, and I got to see a movie I most certainly would not have seen at any other time. I sincerely doubt any local video rental store or Wal-Mart would have this bad boy eventually on its shelves later for me to peruse.

This is a movie from India! Out of all the foreign movies I have seen, never had I seen a purely Indian one. Sure, I had ones with Indian actors or whatever, but never set and completely Indian. Basically, I am excited. This is a new step of cinema for me, a man who claims to be willing to watch anything. Bring it on. 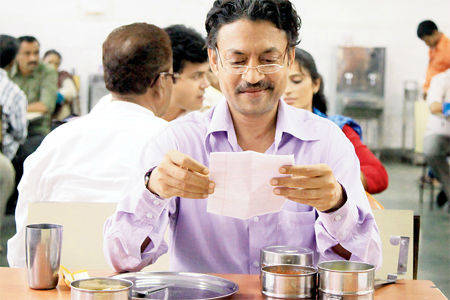 This man? He was also in Life Of Pi, which statistically you probably saw.

This movie features heavily a group of people called the Dabbawalas. This is a delivery service in Mumbai, in which warm lunches can be delivered from a home to the person at work and it will be tasty! Also, restaurants can get into the game too, and send meals straight to their work through this service. Despite gender stereotypes, essentially yes it is the wife at home who cooks the lunch for her husband to enjoy her cooking on the job.

This wasn’t really explained when the movie started, so I thought it was some sort of service where housewives/single ladies randomly cooked food to win over bachelors who had jobs. But no, our main lady Ila (Nimrat Kaur, who looks like the Indian Anna Kendrick to me) didn’t send out that lunch hoping to meet a mate. She has a husband. The excellent meal was meant for him, as he has been increasingly distant as of late and she wants to win back his love.

But it doesn’t go to him. In fact, he doesn’t even notice that what he gets is a different persons cooking. No, it goes to old man Saajan (Irrfan Khan) who is about to retire from his mundane department job after 35 years. His wife past away a long time ago and since then he has been a curmudgeon. But this meal is amazing. Really really good. One Ila finds out her husband has been getting a different meal, she decides to write a note to this mysterious man and see if he knew what was up.

Sometimes, strangers are the easiest to talk to, because you don’t know them and they are not biased. They begin a daily conversation, talking about the troubles in their lives, their dreams and aspirations and of course, love. Ooh, wonder if this will develop at all. That might be bad.

Nawazuddin Siddiqui plays the young gun coming in to replace Saajan when he leaves, and Bharati Achrekar plays Auntie, the upstairs neighbor of Ila who we never see, but only hear. Basically this movie’s Wilson. 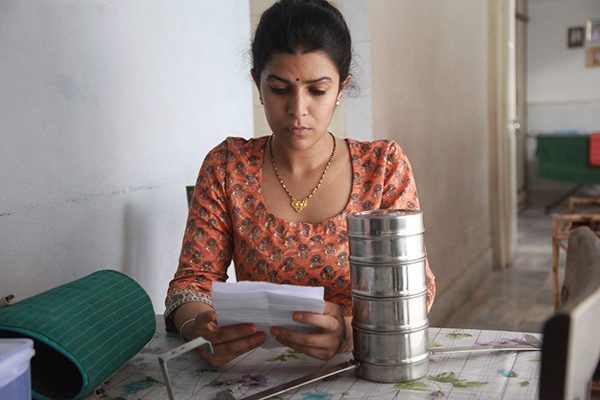 “I sure would like some sweet company, oh, I’m leaving tomorrow. What do you say?” – Ila in a love note.

Awwwww, what a cute movie. Not only was it cute, but the dramatic elements were also decently heavy, so we were dealing with actual serious events and consequences, and not just some frilly romantic fling thing.

And it was decently realistic in the way the events unfolded as well. Assuming the movie itself is actually realistic, I learned a lot about the culture of this city and country. I will assume it is truthful, because I always try to learn cultures from movies and not actual experiences.

It was done stylistically for the reason, it makes sense sure, I can make all the appropriate assumptions. But I don’t want to. I just wanted my tear up and cry moment. I felt like I was deprived of that moment. Okay. I did have one slight tear up moment, but that was a sad one. Not the happy romance based moment that I am describing up there.