Again, with the random Redbox rentals, I usually try to find something that might give me a good review. Shitty movies can lead to great reviews, so picking things I’ve never heard of can be amazing. That is what happened with 1313 Cougar Cult. But with The Loved Ones, it looked like a random prom based horror. Could be hilarious accidentally. Not to mention it is foreign. Australia? Heck yes. 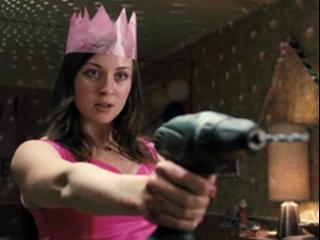 I mean, she is cute I guess. Kind of creepy with the power tool.

Prom is a wonderful time for everyone, except maybe those who don’t get dates. Take Lola (Robin McLeavy), she is a nice girl, but a bit lonely. She tries to ask out Brent (Xavier Samuel), but he turns her down. Not for any malicious reason, but because he has a girlfriend Holly (Victoria Thaine). Makes sense, no harm no fowl.

Well, unless you are Lola. She isn’t a fan of that. When Brent is on a self hike in Australia, he finds himself knocked out, and yes, awakening in a house, tied to a chair. Oh joy! Oh hey, he is in a tuxedo now, and Lola is there, in a dress. What in the hell?

Looks like he is indeed going to prom with Lola, and her crazy family, but prom is now going to be inside. Her dad (John Brumpton) is there to help with the festivities, and grandma to be all weirdly lobotomized and awkward. Can Brent escape from the date from hell, before he get tortured to death in this hell house?

It is important to note that not everyone has a bad prom night. His good friend Jamie (Richard Wilson) asks out a hot goth chick Mia (Jessica McNamee) and has the time of his life. She has a missing brother too. Interesting indeed. 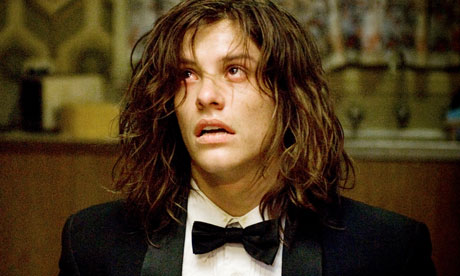 This is what you get for not cheating on your long term serious girlfriend.

I know what you are thinking. This film is stupid. Well, thankfully I am here to tell you that it is much better than the plot makes it see.

But it is also easy to feel uncomfortable during this movie. Lot of screaming, and slow pain. The best pain? Not sure.

I wouldn’t call this a scary horror, jut uncomfortable. But there are also some comedic elements thrown in to break the tension at important points. I will put this under the win column for random foreign Red Box films.