With The Look of Silence, I will have completed all of the nominated documentaries for the 2016 Academy Awards!

This was the hardest one to find to watch and prepare for. Thankfully, Amazon Prime eventually had it available to rent.

If you didn’t see a month ago, I reviewed The Act of Killing, nominated a few years ago for best documentary (and losing to a music based Twenty Feet From Stardom). The Look of Silence is basically a sequel to that documentary. Yes, apparently documentaries can have sequels.

If you saw The Act of Killing, you will have learned that 50 years ago, there was a genocide in Indonesia. The people rebelled and the military took over, and all of the communists were killed. Communists are of course a loose term, and many thousands of people were slaughtered or raped. The people who did the killing became rich and are still the people leading the country politically today. And those people, for the most part, are PROUD of their acts.

It was really fucked up overall, and totally should have won that year.

So the director is back, with the sequel, to continue the story, but in a new way. (Which is good, no one likes the same fucking movie). 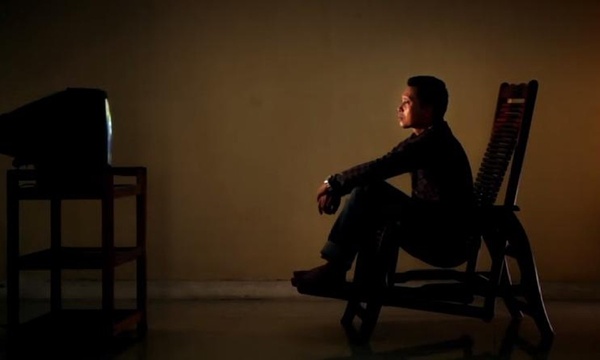 Look how fucking bored that guy is, watching the same movie twice.

Last time we talked with the killers, and for the most part, they showed no remorse. This time, our main character is Adi Rukun (seen above). He wasn’t born when the killing was taken place, but his brother Ramli was alive. He was also killed in a brutal fashion, despite just being a child and clearly not a communist. Because they felt like it. Adi is now an adult and has known about his brother’s death before, but thanks to Joshua Oppenheimer (the director), he has detailed information on exactly how and why his brother died. How so? From the killers, who explained the whole thing, and it was even written down in a book.

Now, Adi and his family are obviously not okay with any of this, but there is basically nothing they can do. Adi is an optometrist, and I guess they use that as a way for him to confront both the killers of his family, and people who killed in general. Offering them free glasses to help the vision and stuff.

So this time, outside of more backstory and information, a lot of it is just Adi talking to these people, asking hard questions and confronting them on their past. It is brutal. It is intense. And people don’t take these accusations kindly, and especially get pissed off at their past being brought up. They’d rather just forget the whole thing.

This documentary was fantastic. These are real people, a real genocide, and talking very uncomfortably about it all. This is the stuff that creates great drama, and it is on a subject people in the West know very little about.

Fuck, it was hard to make my eyes look away.

And I am annoyed, because most likely Amy will win Best Documentary. But I have put this film and Winter on Fire above it, because they were fan-fucking-tastic and important. I liked Amy, sure, but these documentaries feel so much more important. And I will be extremely disappointed if Oppenheimer loses a second time to a music bio documentary.

4 out of 4.
Tags:4 out of 4, Documentary, Foreign, Indonesian, Joshua Oppenheimer, The Look of Silence