I won’t begin this review with another boring introduction about how I know nothing about this film (I do!). I will instead mention a strange coincidence!

For the last two weeks I have been listening to the Blueprints of Armageddon, a seven part podcast series about World War 1 by Hardcore History/Dan Carlin. I have been taking a break from audio books for awhile on my drives to and from work and movies. It is pretty good so far and I am learning a lot. And earlier this week I watched Sunset Song (review at some point), which is a Scottish film based on a book that leads up to World War I. And much to my surprise, the next night, I watched The Light Between Oceans, a film that takes place in Australia, right after World War I.

Fuck. I am so god damn into World War I right now. This cannot be a coincidence, I should develop time travel. And you know, avoid World War I, because that shit was scary.

Awww, a nice happy and calming baby to make me feel better.

A lot of people died in World War I, and a lot of survivors had to kill people to do so. PTSD is real. It has fucked over people. Like Tom Sherbourne (Michael Fassbender), who just wants to be alone. He got a job manning a lighthouse on an island called Janus in Western Australia, which is a long long distance from any civilization. He has no family to bring with him, just a home, a lighthouse, a job and an island to himself.

But eventually, Tom does get a bit lonely. And in the “nearby” town, he has met and started writing to one Isabel Graysmark (Alicia Vikander). They instantly hit it off and fall in love and knowing that only a wife can join him on the island, they get married and begin their lives together.

Unfortunately, their lives together begin with a rocky start. And no, I am not just talking about their island coast that they warn nearby ships about. Pregnancies occur, but so do miscarriages and they start to begin to lose hope. Sure, they love each other, but a death in the family is a hard thing to cope with.

However, miracles do happen. A small row boat washes ashore and inside is a dead man (Leon Ford) and a crying baby who needs help. Have their prayers been answered? It is Tom’s duty to report this incident, but if they do that, the baby will surely be taken back and there is no way they can adopt her. Maybe they can just…lie, raise the baby as their own. 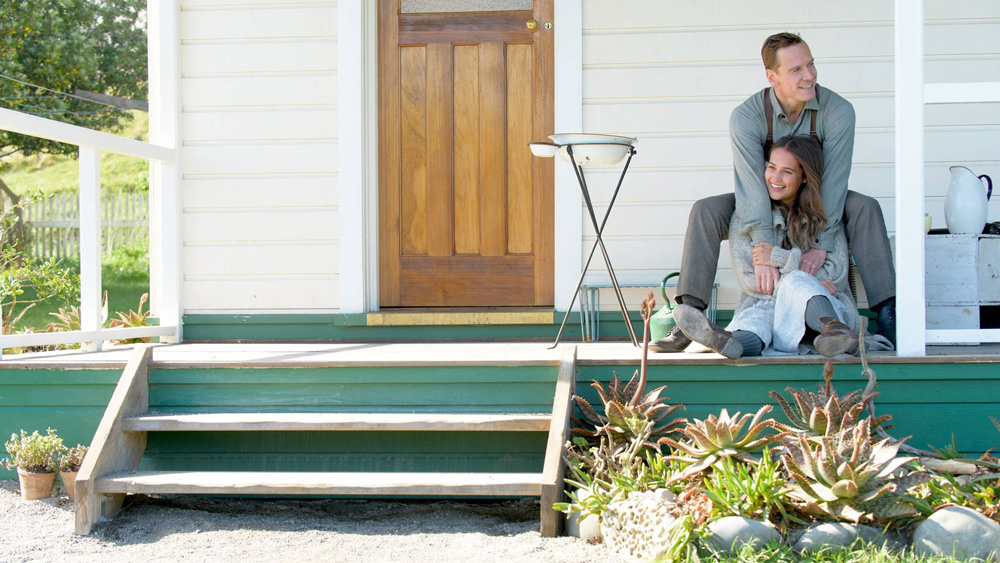 Nothing really says love like turning yourselves into patio furniture.

Well, I cried. I cried a lot. I cried probably more than a grown man should in a film, unless it is somewhere in his first 1-3 times watching Les Miserables. This film had all of the correct notes to just wreck me emotionally.

It had romance and loniliness. It had pregnancies and miscarriages. It had depression and danger. It had the cutest baby girl, learning how to be a real human. It had a father figure who would do anything to protect his wife and daughter (well, “daughter”), both things I can relate to. And it had morally black situations. That is more hardcore than morally grey. Because, really, at some points the right decisions are easy to determine as long as you ignore the human factor. But eventually, the situation becomes so out of control that I didn’t even try to predict what would happen next. I just wanted the movie to decide for me and show me the consequences of these decisions.

For some, the film will drag at over 2 hours long. There are lots of scenes with no dialogue, especially early on, but the shots are beautiful and the emotions are showcased in our actors eyes. But it was just right for me. I almost never wanted it to end. I was shocked every time we had a large jump in story time, basically wishing I could see every decision and action that led up to the end.

And fuck, we cannot forget about our leads. Vikander and Fassbender’s chemistry (and last names) are so strong in this film, they feel like a real couple. And hey, it turns out that they are now still a couple thanks to the film. The film showed them falling in love so well because that is what was happening between them in real life. And damn it, it shows. Strong performances were also given by Weisz and Clery, our little girl.

The Light Between Oceans is a movie I never want to see again. It is also the type of movie that makes me want to read the book it was so good. I just cannot see myself dealing with all those emotions in such a small amount of time again that I just will probably avoid it forever, despite being one of the year’s best.