The Hunter came out almost a year ago, last July. I am pretty sure I got it sometime around then too. Whoops. One of those random gains that you forget about for apparently 10 or so months.

Let’s make this a metaphor about life. I just won’t explain that metaphor, to complete this very bad intro to a review. 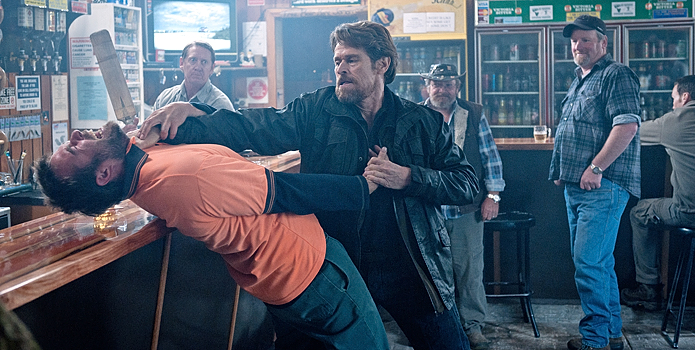 Red Leaf is a military biotech company. Yeah, didn’t you know that those were a thing? Because they totally are! Military. Biotech. Some sort of crazy weapon based thing. Well, they have reports that the Tasmanian Tiger has been spotted recently in Tasmania. Makes sense. Unless you realize that that they have been extinct since 1963! Oh hooray, a breakthrough for the species! Maybe they can breed them back to a populated state!

Wait. Hmm. Red Leaf isn’t a fan of that. In fact, they hire The Hunter (Willem Dafoe) to head to Tasmania, capture the tiger, extract its DNA and kill any other tigers he is able to find. Holy shit, that’s the opposite of saving them! It turns out they might have some paralyzing venom in their bite, and they want to weaponize the fuck out of it, charming. They also want no one else to get a hold of it. Evil!

He heads to Tasmania, pretending to be a Biology researcher, and stays at a local cabin. Lucy (Frances O’Connor) is drugged up on pain meds, despite having two children. Her husband died, he was a wildlife protection guy. Hah.

Either way, The Hunter goes into the wild 12 days at a time, setting traps, looking for the Tiger and then returns to the cabin. He begins to like the kids, fix their home life, and even the mom. They almost make a quaint little family. At the same time he has to deal with local battles between the environmentalists and the loggers, who get violent over each other.

Will the Hunter find the tiger and carry out the deed? Or will he give in to the pressures of other groups. After all, if he refuses, they will probably just keep sending people to do the job until it gets done. Sam Neill is also in this movie as random helpful neighbor guy/guide. 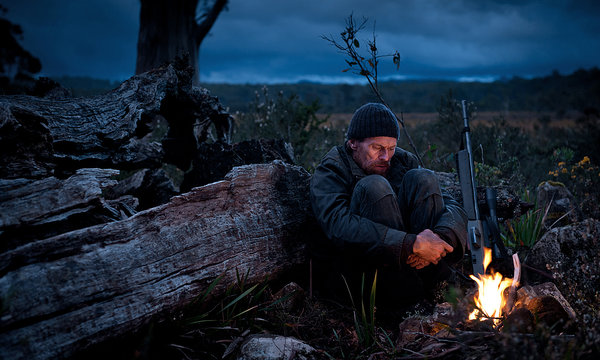 Ah, they got a picture of everyone who saw The Hunter on opening night.

The cool thing about The Hunter is that if you watch it, you are treated to some kick ass Tasmanian scenery. It is filmed entirely in the country, so it gives it some layers of authenticity. There are also people there who claim to see the Tigers, but have no real substantial proof, so it is based on local legends. If you like Willem Dafoe, you get a lot of him in the movie. Not shirtless or anything. Just it is mostly him being a bad ass (or pseudo badass).

However, the movie does move pretty slow. On top of that, even though the ending was unexpected, I didn’t like what it gave me. It all seemed completely out of left field, and probably not the best course of action to end it. They had the balls to end it that way, but I didn’t find the character change to be believable.

You know what that means? Average! Hooray. I’m bored.

2 out of 4.
Tags:2 out of 4, Australian, Drama, Foreign, Frances O'Connor, Sam Neill, The Hunter, Willem Dafoe