One hundred feet is not a big deal, in most cases. One case where it is a super big deal is if that is the number and units of the pile in your living room. That’d be pretty gross.

Another time when it would be a hard distance to cross is if racism was involved. Which is one the The Hundred-Foot Journey seems to be about. Classic European Racism, cooking, and good old fashioned stereotypes.

Does it get any better than this? 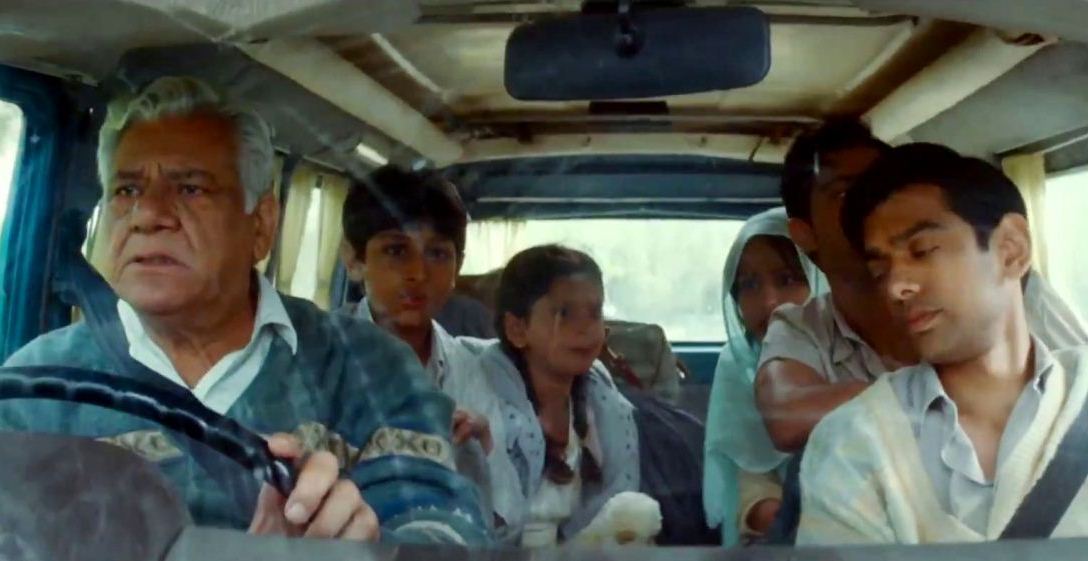 Look! A big Indian family cramped in a van! Hilarious!

Papa (Om Puri) and his family used to have a nice restaurant in India. It was very popular and his wife taught one his sons, Hassan (Manish Dayal), all the secrets to spicing food right and how to cook. Unfortunately, I used the past tense and they lost the restaurant in some…voting riot thing? They also loss the mom and somehow out of this got a fat stack of cash to start a new life somewhere. Leaving Mumbai, they go to England but it sucks there. So instead they go to the main part of Europe, driving around, looking for good vegetables and a community to get a new house and start a new restaurant.

Well, their breaks kind of freak out near a small town, and that is where Papa is inspired. There is an abandoned building, complete with inner courtyard, perfect for Indian food. It is just right across the street from a One Michelin Star restaurant, led by Madame Mallory (Helen Mirren). These small town French people are not used to Indian food or culture, so it seems like a terrible idea, but the Papa insists to spend his money his way.

So they do that. It causes competition. The restaurants rage war. Some racism may occur. Dirty tactics are used. But Hassan just wants to fight. And f–, err, and befriend Marguerite (Charlotte Le Bon), one of the sous chefs across the street. But even eventually Mallory won’t be able to deny Hassan’s talents, offering to teach him even more skills, so that one day he might even conquer the world.

Other family members of Hassan’s are played by Amit Shah, Farzana Dua Elahe, Aria Pandya, and Dillon Mitra. We also have Clement Sibony and Michel Blanc to add real french people to the mix.

This reminds me of that one scene in Ghost. You know the one. Yep.

The Hundred-Foot Journey aims to be a feel good movie about cooking and overcoming obstacles! However, everything feels so rushed (And thus, undetailed) that it plot of the movie seems to almost change every 20-30 minutes, leading to a lack of focus. That is my analysis in a nut shell.

Basically it starts off as the feuding between restaurants. Mirren sees the error of the ways and then they become all nice nice the rest of the film. Then it becomes Hassan learning from the nice restaurant and helping add his own styles to the cooking scene and helping them do good. Then he moves on from that as well and experiences life away from family and friends, doing even more innovative cooking on much grander scales.

Not a lot of that aspect is shown in the trailer. Basic plot description is too feuding restaurants. Despite being two hours, that and every other part feels rushed. In fact, after opening night of the Indian restaurant, they literally never show them having customers again. I guess they didn’t have issues or worries, even when they lost their main chef? Apparently they were doing okay and that didn’t matter anymore.

I also really hated the ending. It seemed to contradict what the first half of the movie was about. Clearly it was about not judging people/groups/foods by their cover and giving things a shot. That all methods of cooking are unique and special and worthy. Yet the end felt like it went against that message. It was really weird. I hated it and by achieving their own self morals, it just seemed fake and plastic at the end.

Also, for a movie about cooking, there is an awful lot of this movie without showing cool food dishes. An inspirational tale that doesn’t know what it wants to really inspire.