I have not seen a lot of actual horror films made by Eli Roth. He is supposed to be a big name, but when I looked at his directed list I had seen…well, zero. I thought he had directed Aftershock, but I was wrong about that.

But I am sure I will watch Knock Knock at some point! That is some sort of Thriller and it is on VOD exactly when it was supposed to be. Apparently The Green Inferno was not as lucky. Made in 2013, it was supposed to come out in 2014, but shit hit the fan, and it got delayed over a year. Which is why Eli Roth even has two movies coming out only roughly a month apart.

Speaking of intro small talk, the film was clearly inspired by Cannibal Holocaust. That is a film from the 1980’s which introduced found footage before it was even a thing. It was very gruesome, realistic, and basically the same plot of some white people heading to the rain forest to get eaten. In fact, people insisted at the time that it must have been a snuff film! The title itself was the name of the movie that was being made in Cannibal Holocaust. 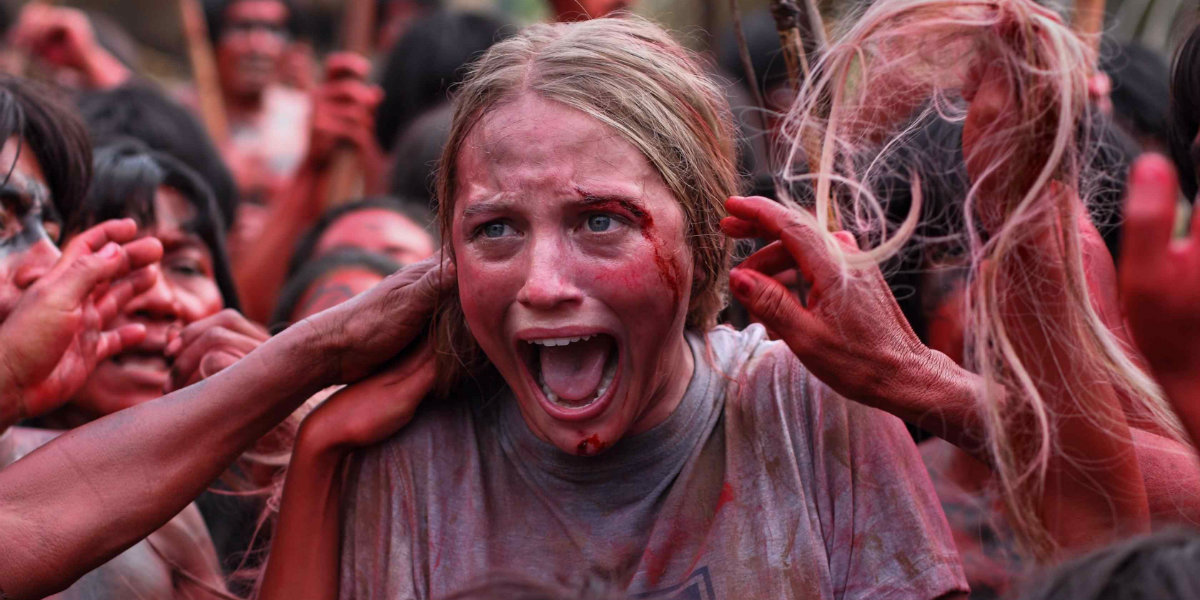 Being an activist in college is one of the easiest things to do with your free time. Once you walk through a quad or a pit or a hallway, you will find dozens of protests happening all around you. Every day. Guaranteed. All you have to do is stand around, do a chant, and maybe (maybe!) hold a sign.

Justine (Lorenza Izzo) is just a bright eyed and bushy tailed freshmen in NYC. She gets interested in the activism, but her roommate (Sky Ferreira) thinks the local group on campus is too crazy. They plan to go to Peru! There is a logging company who is illegally taking out trees and threatening to remove local tribes from their homes! They will dress up like loggers, tie themselves to trees and record their actions straight onto the internet. That should stop them from hurting them and get people to care about their group and hate on the one company. Sweet. That goes fine enough. Outside of spoiler stuff.

The real issue occurs when they drive to leave the jungle. Something goes wrong with their plane, killing half of the crew as it crash lands back into the jungle. This is where they are quickly found by the local friendly natives. Just kidding, they are all painted red and totally scary. They tranq those college students and capture them to bring them back to their village.

And guess what? You already know what. They eat people! Yay!

Now they have to figure out how to survive the tribe, run away, survive in the jungle, and get back to America as soon as they can. And guess what, again! They ruined their best chance of escape by making the logging company stop their illegal actions. Life is a bitch some times.

Starring Ramon Llao and Antonieta Pari as the main two village people. As for our other activists, we have Aaron Burns, Nicolas Martinez, Magda Apanowicz, Daryl Sabara, Kirby Bliss Blanton, and Ariel Levy as our leader. 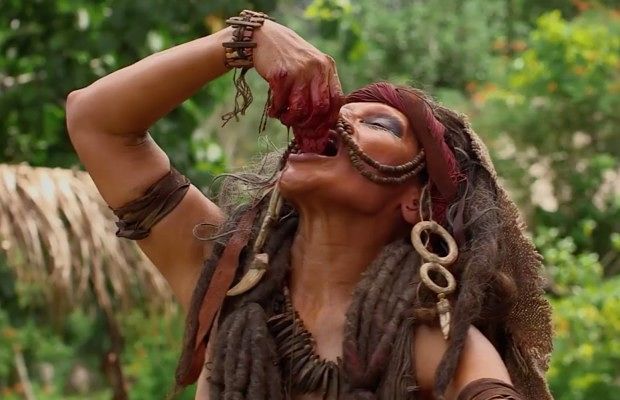 “What? Tribal mom got your tongue?”

I had to look away numerous times throughout the movie, my stomach unwilling to negotiate with the eye terrorists on the screen. Eating people it turns out can be pretty gross. Unfortunate, if everyone was simply just eaten, that’d be a boring and just gross film. They do a good job of keeping more of the deaths diverse so that it doesn’t get stagnant. Although watching that boy from the Spy Kid movies felt very weird for me.

As a horror film, it did its job in terms of grossing/creeping out the viewer. It definitely isn’t boring, outside of some of the earlier moments before they make it to the other country. It is super violent and should make you uncomfortable.

But it feels all very cheap at the same time. Overall the film lacks a lot of substance. It is trying to make a statement about social justice types, or America butting into things, or…something else. It just does it in a terrible way. “Don’t do this, or you will get eaten by the natives.” Cultural exploitation aside (which I do not care about), it isn’t a strong link and ruins any message it was trying to make.

For those who like gross stuff, this is your movie. If you want anything besides that, well…uh, not this movie then.