Oh wow, with The Gatekeepers, I believe it is the first documentary that I have seen in the theaters.

The first one not based on a musical act, that is.

Either way, local theater probably got it by accident, and despite never hearing about it, I decided to give it a spin. Not to mention it was nominated for an academy award! (It lost to Searching For Sugar Man).

Long story short, Shin Bet is the main intelligence agency for Israel since the Six-Day War. Basically it was a surprise attack by Israel, thus a quick war, which expanded its borders to include the West Bank and Gaza strip. After that, the territory they had just gained was full of Palestinians, so they had to make sure they didn’t try to revolt or cause trouble. This lead to occupation, and the Shin Bet being an important tool to protect Israel from terrorism.

The Gatekeepers is a documentary interviewing the last six heads of Shin Bet, to talk about the last four decades, prod them into telling secrets or what have you. You know, since they are now all out of the organization for various reasons. Yay secrets! Yay terrorists talk! 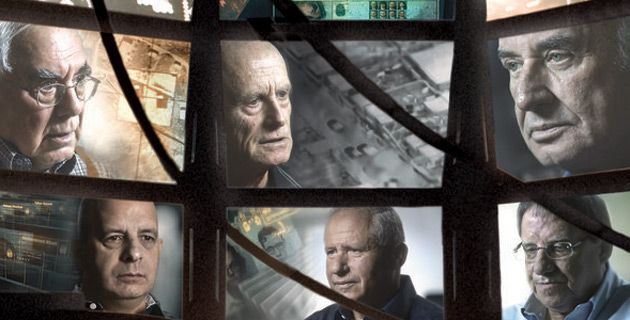 Yep, an actual picture from the documentary about people talking. Looks entertaining as fuck, right?

Well, the information gained from these men was neat. Seeing them talk about torture, sketch propositions, morality, and regrets in their life. Very very interesting.

But it could have been laid out WAY better and more coherently.

I didn’t know this documentary would be all subtitles, but that makes sense and is fine. However, the subtitle work was shit. Over 10 occasions I couldn’t read the subtitles clearly or at all, which is kind of really fucking annoying. The least they could do is make it not a challenge to figure out what is being said. After all, documentaries tend to be about gaining and sharing information. If you fail at the most basic levels, then what the hell.

I think it also could have been ordered a lot better. When each man first is shown in the movie, they show up a quick graphic telling me their name, and when they were head of the Shin Bet, but never again. Although it is pieced together chronologically, it isn’t just an interview with one and then the next and so on. No, they all talk about all six events. After all, they all were in Shin Bet doing things before being the head, and afterwards they still paid attention to the events. It is great getting multiple perspectives on events, but you know what would have been even better? Knowing which man was in charge at which point in time the entire movie, not just the few seconds they showed it to me.

Despite going chronologically, I never knew when in time every event they talked about occurred, so even if I can somehow remember who was head and when, I still wouldn’t know who was in charge. These are simple problems to fix that would amplify getting the information out there better. Heck, even a permanent placard in the top right hand corner just having their name/years on it permanently would be preferable.

Finally, the strange CGI graphics implemented in the movie, to show multiple TVs in a control (Or Intelligence like) room to transition between scenes just felt tacky.

Although I think the information is interesting, despite knowing practically nothing myself, I think they put together a piece of shit documentary on most of the technical angles to feature it.

1 out of 4.
Tags:1 out of 4, Documentary, Foreign, Israel, The Gatekeepers, True Story