I first heard about the documentary The Final Year sometime last year. Politics are getting crazier every day, and the Obama administration feels like forever ago.

From what I understood, it would be looking into the year 2016, not from a year of worrying about primaries and nominations, but specifically on Obama and his goals in that last year. What drove him forward, what was he hoping to accomplish, what did he actually accomplish, and why? His desires to not just be a lame duck and coast his final year.

And it would have behind the scenes access! It would be very fly on the wall candid feeling!

These are mostly assumptions I made in my head it turns out.

It was technically about Obama, sure. But really, it was about the Obama administration foreign policy team, dealing with the world, and what the world was doing to them. 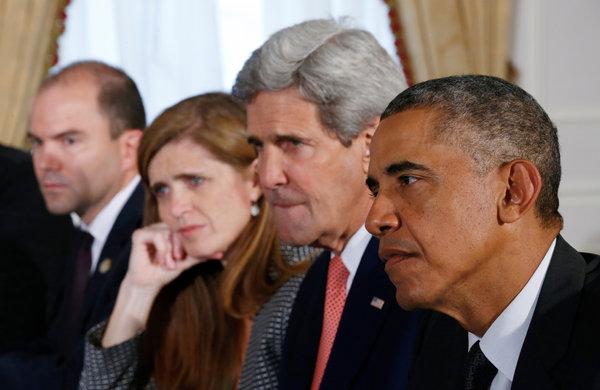 Oh good, a photo of the four main people, with the most focus on those who had less screen time.

John Kerry was the Secretary of State in the second half of the Obama administration, and he was dealing with foreign policy. We also have Samantha Power and Ben Rhodes. Power was the Ambassador to the United Nations for four years, while was the Deputy National Security Adviser.

Clearly all three of these individuals were in positions to deal with a lot when it came to foreign policy. We get a lot of access to these three during the final year, both from interviews for the documentary, their own scandals, and videos of them doing their normal jobs and responsibilities. Kerry has less screen time than Rhodes/Power but still is definitely a lot more involved than Obama.

And well, I think this one fails to become a great documentary for feeling all over the place. What connects it is just one year and events happening to and from three people. And lets just be clear, this is not an opinion. They are less interesting than Obama. A lot of people are going to go into this expecting a lot of Obama, and they are going to be disappointed.

It also feels a bit sadder overall, knowing that basically everything they set to accomplish and did is being dismantled and finished. It is a dark look at politics in that regard. But still not dark enough to really fully care.

At this point, I wish this documentary came out a whole year earlier, right away, so that we can get the impact fresh in our minds. At this point, it just feels too late.