Often worshiped throughout society, often by other men, building great and giant phallic monuments into the sky. The subject of the penis can even get a man into college.

Just in case you wanted another movie reference, here is one of my favorite quotes from Chasing Amy, about how everyone needs dick.

But before I get off on a tool tangent, let me tell you that I am talking about a documentary about penises. The Final Member is about a penis museum. Not just any penis museum, the only penis museum, located in the family friendly city of Reykjavík, Iceland.

It was founded by Sigurður Hjartarson, who originally just collected penises as a hobby. Not a weird fetish thing, mind you. Just a hobby. And then people heard about it and wanted to see all the penises. Dude has everything too! He even has a troll dick, whatever that means!

But he was missing one main mammal specimen. The human penis. 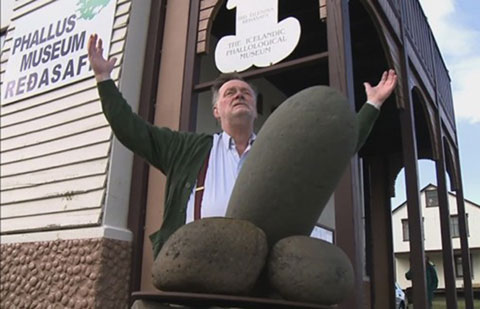 Troll dicks are made of stone, I have to assume.

This documentary is about the search for the missing piece of their prick puzzle. The problem is they couldn’t just take a penis from a dead man. People don’t let that happen. Instead he had to have someone donate their penis ahead of time. And then that person had to die. And ideally it wouldn’t be in a frail old dude state.

The documentary talks about its two most likely candidates. Pall Arason, a 95 year old Icelandic adventurer/womanizer who is pretty famous in the area and wants his penis to live on after his death. And Tom Mitchell, an American with a much larger than average sized penis named Elmo, who he wants to be immortalized and worshiped. Basically.

The problem with these men come with age (and shrinkage), and the American being awkwardly obsessed about how his penis would be immortalized, willing to have it surgically removed to become The Final Member.

The problem isn’t just with the awkwardness either. It is that for some reason, a documentary about searching for a human penis is far more boring than you would imagine as well. All the drama felt sort of fake, given the camera crews involved, and I can’t tell if the American actually wanted to just become famous for being crazy. It didn’t feel real. And if you are talking about penises, you need to be real.

The museum is probably a joy to visit. Just the documentary spent too much time on the search and not enough on what the guy had already accomplished: a room full of dicks.