“Hey, website guy, why do you keep watching bad movies, then getting upset that the movies are bad?”

Well, reader. Just because a movie is direct to video, not advertised, or unheard of doesn’t mean it is automatically bad. I have found many great films that were blind watches, so that is part of the thrill. Sure, more may have been shit, but when the good ones show up, it is a great feeling. It is a feeling that lets me tell the world that they need to see a movie, so that they too can have some joy in their lives.

But this time, The Courier happens to fall in line with the majority, and isn’t a good outlier.

Generic photo, void of any action.

So in this movie we have a courier (Jeffrey Dean Morgan). We know he is a courier, because his name is The Courier. It is important to establish himself as a courier, and not a transporter, because making a movie about a transporter would be silly. Either way, some guy (Til Schweiger) makes it so he has to deliver a package to another man. He just wont let him know where to find the man, because that would be too easy. So instead, he is getting a lot of money to use his skills to find the man and deliver the package. If he doesn’t, he will die.

Oh, well, I guess he better get to it then. 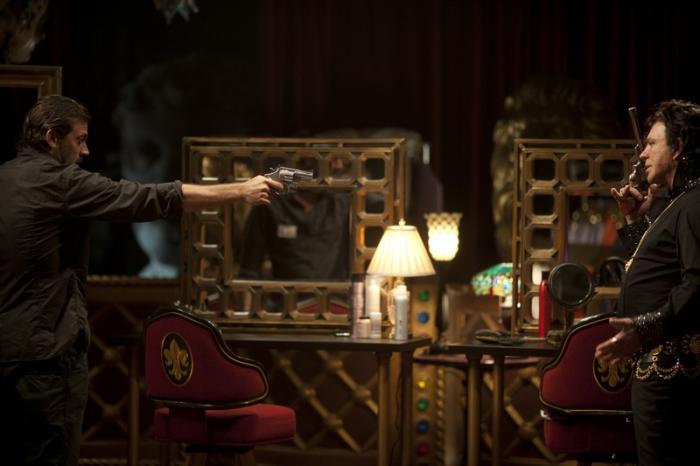 Generic stand off, still void of any action.

So here is a problem I am facing. Jeffrey Dean Morgan. He is a charismatic guy, I guess. He could be a nice action star. I liked him in a few movies. But now he has been the lead in two movies I have rated 0 out of 4 (The other being The Possession). I don’t do that too often, just as rare as a 4 out of 4. I am proud of my bell curve of ratings! So two films I have just hated that I watched it and would never recommend to anyone in my life ever.

What the hell, Jeff?

This movie was so bad, they didn’t even advertise it correctly, and not for the reason you think. You probably have never heard of the movie, that is fine. It is a direct to video, no theater, action movie. Whatever. But it did have some movie posters regardless. Like this one here. Go on, look. Kind of cool, sure. BUT THEY SPELLED MICKEY ROURKE’S NAME WRONG. On their own dang official poster.

Get the fuck out of here, The Courier.