I remember seeing the cover for The Collector when I worked at a Blockbuster and thinking I would never touch it with a 10 ft pole. But then something else happened. I saw a trailer for The Collection, thought it seemed familiar, and thought it looked interesting, if not a bloody mess. Well, turns out it is a sequel to The Collector (shocking, I know). Too bad local theaters never got the sequel to show, so I am stuck waiting for the dvd release, which also means plenty of time to watch the original. 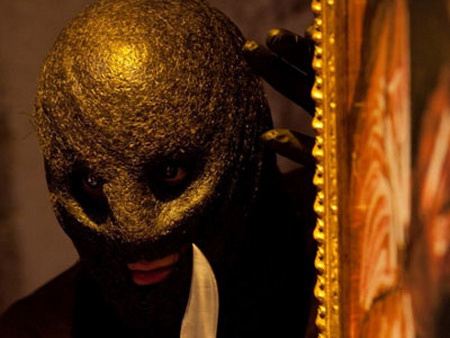 Well I guess that is a unique look for a bad guy. I guess.

Arkin (Josh Stewart) is a crook. He has crook friends too, but not a crook family. He just needs money to help them get by and survive! So he hears about this house that the family has left for vacation, and they got a pretty good jewel in their safe. He takes the one last job, steals the gem, makes bank, and boom, he can stop being a crook.

But who would have thought that this Collector (Juan Fernandez) would have turned it into his own house of horrors at the same time? Go figure. So a quick in and out thievery turns into a locked in the house, try to escape, avoid the plethora of traps and other currently being tortured individuals. Hooray! You know, while he is also actively looking for anyone who might have come to fuck up his strange torture plans.

Here are some other people I’ve seen before in this movie, Madeline Zima, Andrea Roth, and Michael Reilly Burke.

I won’t even do a dramatic question thing to end this plot, its pretty simple. 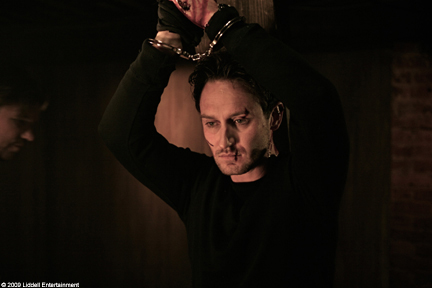 I was going to make a joke about his character from No Ordinary Family, but given its ratings, I know no one would get it.

But pretty simple can be a good thing. The beginning of The Collector was a little bit slow, but I think the build up was worth it. The traps seemed intelligent and well put together, no crazy Rube Goldberg contraption. We just have a stranger entering these traps when he is already set up and torturing some house people, that is all.

The traps however felt inconsistent. I am surprised his initial trip into the house / to the safe upstairs he found himself trap free, but after that, was surrounded by them in literally every room. Like they magically appeared. Really that is my biggest problem with the movie. Inconsistencies with traps. I know the Collector wasn’t just placing them still, maybe just a few resets. The Collector also had no problem running around the house avoiding his stuff. The ‘bear trap’ trap just came out of no where, despite the floor being covered with them.