Confession time! From the original Bourne Trilogy, I only really saw the first one and I am pretty sure that was ten years ago. I just didn’t care that much, thought it was too slow. But you know, okay. So I had to rewatch it last week, and for the first time the second and third ones to make sure I was prepped for the newest installation, The Bourne Legacy.

Smiling Bearded Jeremy Renner wants to be your friend. Not really a joke, just a fact.

Remember everything from the first three films? Well too bad, not much of it matters. Basically, this movie takes place around the same time as the events of Ultimatum. Jason Bourne scared a lot of people when he showed up out of nowhere in NYC and started messing with them all. So much, the CIA went into lockdown.

Potentially a spoiler, but I think knowing the next part helps a lot.

A different program, called Outcome, was similar to the Treadstone program of the first three films. Instead of taking individuals who were already skilled to turn them into agents, they are taking individuals on the bottom of the totem pole and enhancing them artificially with pills.

Aaron Cross (Jeremy Renner) is currently fucked, because he is almost out of pills. On a random mission in the Alaskan mountain range, he lost a bunch of his blues/greens, and is almost out. Even when he gets to the outpost and meets another agent (Oscar Isaac), he can’t get any extra from them. Have to file a report. Without the pills, his body will go crazy and crash. No good.

Too bad, thanks to CIA head person Eric Byer (Edward Norton), they have decided to wipe out the existence of all of the Outcome agents. Gotta kill em all, most by switching their pills, but, wouldn’t you know it, Aaron Cross escapes! Still needs the Blue/Green pills though. So he does the only thing he knows, kicking ass, to find Dr. Marta Shearing (Rachel Weisz) who might know how to get more pills.

Or even better, a way to not need the pills anymore. Can he survive long enough to find a solution, when people with guns and other super agents chasing him? Can he stay ahead of the entire CIA and all of its surveillance long enough? Does the fact that Stacy Keach and Dennis Boutsikaris play other head of operation people actually matter to Edward Norton? 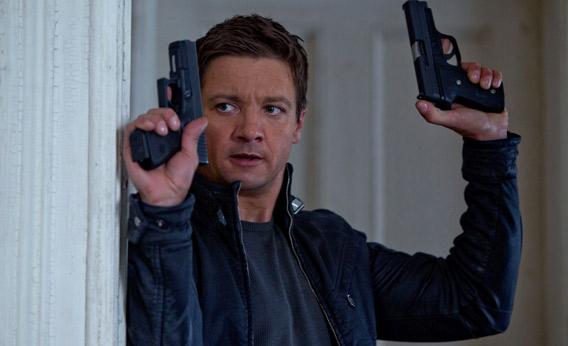 Fuck. Not even a spoiler, but Extreme Ways by Moby does end this movie as well. Gah, when I first heard that note, I had a silent rage in my seat. I really don’t like that song.

But hey, other than that, I really like it. There were issues of course. I didn’t like the way it was spliced in the beginning, making sure you had no real knowledge of what was going on for awhile, and setting it up. Bump that, just tell me. I liked Aaron Cross better than Jason Bourne. Jason Bourne was almost emotionless, while, as you saw above, Aaron Cross at least smiled. The relationship between him and Marta also made more since than Bourne’s relationship.

When they are eventually in the Philippines, there is one chase scene that is incredibly long. Way too long. They split it up to involve different aspects (foot, vs motorcycle, vs what is chasing after them) but I felt like it got above ridiculous at that point. Either way, besides that, found it all pretty entertaining. Even the parts where Renner had that bad beard.