Apparently if I watched some of the trailers for The Big Year, you still wouldn’t really know what it is about. I will tell you right now. BIRDING. Or Bird Watching, if you want to be lame about it. Yes. The art of looking at birds and feeling good about yourself.

Mort importantly, A Big Year in the birding world is a competition to see who can see the most birds in a single calendar year. The competition can be state / province based, lower 48 states, or the biggest area of all states except Hawaii, and a bunch of other territories around the US. I didn’t learn these until I wiki’d that shit. 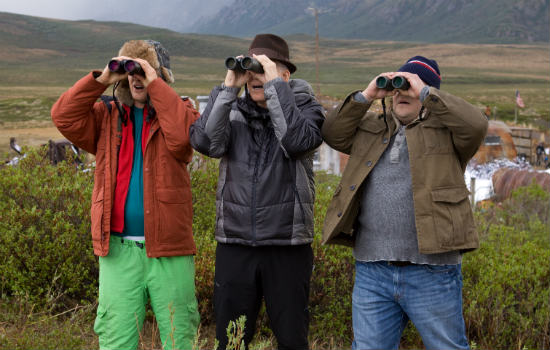 Can you tell who each of these three big actors are by just this picture alone?

So the story tells of three different “birders” who are attempting the big year. Owen Wilson plays an expert birder. In 2003 he reached a new record for A Big Year, reaching 723, putting him into instant celebrity status. Well, pseudo celebrity. Dude can find a bird like no other. He hasn’t attempted another big year since, but this year he is just going to do it for a few months, set the pace, make sure no one is getting close to his record. But will his dedication and drive break apart another marriage?

Steve Martin is a CEO who is retiring finally. Super rich, he wants to try a big year, full support with his wife, JoBeth Williams. But his job constantly is bugging him to return to the game, to fix problems, to even take another job. Joel McHale and Kevin Pollak are the corporate D-bags who continue to harass him throughout the year, warning him that after retirement, comes death.

Jack Black is the narrator and also attempting for the first time. He has trained to recognize any bird by a few notes only. He isn’t rich though, kind of poor, disapproving dad, and working a full time job to help pay for this during the year. But he is inspired to finally do something with his life. If he could also woo over Rashida Jones (who can do hundreds of bird noises on her own (I think in real life too?)), double win. Bird love. All that shit.

The movie shows the three men and their journey across America, just doing the things they love. They don’t travel together, but they run into each other enough to build a rivalry. Of course they don’t want others to know they are doing a big year, will make them no longer help them out. The movie probably sounds super boring. Bird watching. Wtf?

But look, there is some action!

Of course this whole thing is based on the honor system. Don’t have to take pictures, because hearing the bird counts as well. So it sounds like cheating may happen, and obviously it is dealt with in the movie. Not to mention Jim Parsons of Big Bang Theory slinks about in the movie as well.

But overall? The story was definitely done pretty nicely. By the end, you don’t hate Owen’s character like you’d expect. Everyone has their own appeal and their own “happy ending” so to speak. Had some chuckles, and hey, good for the whole family.