I wouldn’t say I am the best cook. Nor am I the best individual to make sure everything in my fridge stays fresh until it is used. We have thrown out plenty of leftovers, and vegetables, who never had a chance to shine. (Because vegetables suck!)

What I am trying to get at is I understand when food gets bad, and it does right before I want to use it.

As for people, I don’t know when people get bad, but Breaking Bad tried to examine that. The Bad Batch is both about bad people, and about bad food. I think you can understand what I am talking about with that. 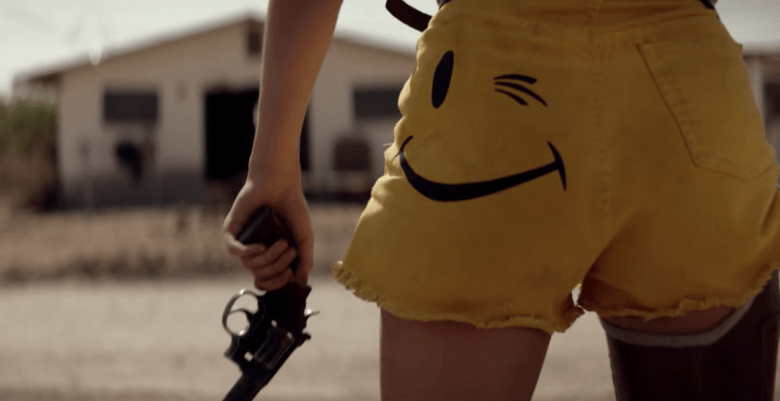 Stop staring at her winking ass, I am talking about eating people NOT…the other thing.

In the future, The United States sucks a bit more than normal, and there is a section of Texas they have decided to just cut out from the rest of the country. Texas. It makes sense. Beyond those gates is a desert wasteland, claimed by no country, so the people who inhabit it have no rights or laws. This is a prison. People from the US are sent here and called The Bad Batch. They are the freaks and unwanted members of society, or those who cannot fit in. And they are sent to the wasteland to die or thrive, they don’t care, they just need them gone.

And when Arlen (Suki Waterhouse), Bad Batch #5040, is dropped off, she finds herself lost, confused, and immediately captured by a group of cannibals. Now don’t worry, she is able to escape this muscle clad community back into the desert, but not before losing her right hand and right foot.

Thankfully a lone wanderer finds her and dumps her off at a community called Comfort, where she is able to get back on her feet, well, foot, to try and make ends meat of this new society she has been thrust into. And what she wants is revenge.

She apparently goes into the wasteland with a gun, searching for crows for food, and hoping to find someone from that community to kill. But this time she finds a little girl (Jayda Fink), born in the wasteland, forced to live as a cannibal. And now Arlen’s life will really begin to change.

Starring Jason Mamoa as the Miami Man, Keanu Reeves as The Dream, Giovanni Ribisi as The Screamer, Yolonda Ross, Diego Luna, and Jim Carrey as a Hermit. 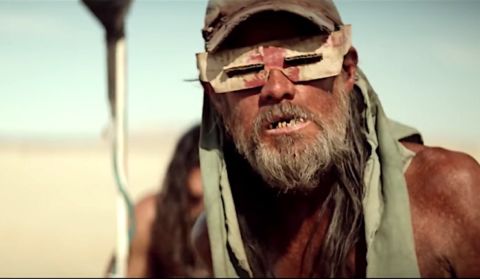 Don’t worry, it is hard to tell even without the glasses that this is Jim Fucking Carrey. I didn’t know until the credits.

When The Bad Batch exceeds at a mark, it exceeds at a very high level. In terms of world building, it created a post apocalyptic society without having to make an actual apocalypse occur, which is pretty awesome. It goes fully into creating a believable enough atmosphere for the characters to live, thrive, and interact with. It only had a few communities in the film, so it isn’t as expansive as something like Fallout, but it gets the job done for a feature film.

The other thing this film excels at is its cinematography. Barren wastelands hardly are sexy to look at, and it is still true with this movie. But the camera work gives an addition to the characters isolation and thirst, by forcing it on the audience. The colors in Comfort are also vibrant at night to explain their drug fueled, care free attitude towards life. It is a visual spectacle.

The Bad Batch does have some issues with pacing. Despite a rough plot being given, it was really hard to figure out at times just where the movie was headed. It was unpredictable with character actions, so it wasn’t obvious just what the hell was the point. It also dragged heavily in the middle.

A lot of people are likely to be upset at the ending as well, including me. Based on the plot, I couldn’t tell where it was heading of course, but still found myself left down based on where it ended up.

If anything The Bad Batch is a visual spectacle (and not in the CGI infused version of that word), with an amazing world and some weird shit going down. But it is easy to get a little bit bored and have your mind wander off at points.