I have been waiting years to review this movie. Years! Because as you probably already know, Teenage Mutant Ninja Turtles has been in production hell for years.

It all goes to the time before time, 2010, when Nickelodeon had the rights for TMNT and announced that a Michael Bay company would be in charge, with Bay as a producer. This scared a lot of people.

But nothing was to prepare the fans for March 2012. That is when it was presented that the movie would actually be called just Ninja Turtles and was setting out to change at least half of their origin story. One major point was of course making them Aliens from some Turtle planet. Shredder was also a government agent / alien that could grow blades from his body and a lot of the turtle personality traits were switched around and changed, seemingly unnecessarily.

Fans raged, internet was set on fire, former voice actors wrote nasty letters to Bay and needless to say, production was slowed and delayed. The release of this movie was kept getting pushed back, and that’s why it took almost six years after securing the rights for this movie to be released for the public.

A movie, for all intents and purposes, that should have been pretty easy to churn out. 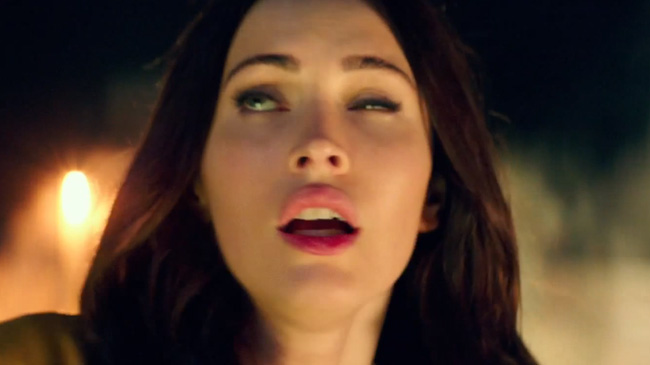 Just like it should have been pretty easy to act out fainting, one would think.

Thankfully, the story takes place in modern NYC. There is a small gang war happening, where The Foot Clan is running amuck in the town, stealing shit, taking prisoners, being assholes. Basically a giant terrorist organization in NYC and for whatever reason just the local police force is doing something about it.

That and four mutated turtles in their teenage phase who have been trained as ninjas, that is. Leonardo (Pete Ploszek), the leader and Katana user, Donatello (Jeremy Howard), the smart one and Bo Staff wielder, Michelangelo (Noel Fisher), the joker/lover with the Dual Nunchaku, and of course Raphael (Alan Ritchson), the lone wolf and bad-ass with the Sai.

They are attempting to stop the Foot Clan in secret, after being trained by their Sensei Splinter (Danny Woodburn), an Adult Mutant Ninja Rat. And they would have been kept in secret too if it wasn’t for that troubling news reporter April O’Neal (Megan Fox) and her desire to get out of fluff news reporting. She discovers them and gets caught up much deeper into the war than she had wanted, especially since she knows no one will believe her. Not her boss (Whoopi Goldberg) or her camera man (Will Arnett, definitely not playing Casey Jones).

Also featuring non-science science, with a lab company lead by Eric Sachs (William Fichtner) who has a hand in the turtle creation without realizing it. Also featuring Johnny Knoxville and Tony Shalhoub as the voices of Leonardo and Splinter. What? Yes. For whatever reason, those two characters had different voice actors than the people playing them for real. Kind of odd.

Speaking of odd, The Shredder. I have no fucking clue who played him or who voiced him, if they are two different people. The internet seems to be void of that information despite being the big bad villain and all, and in the movie quite a fucking bit. 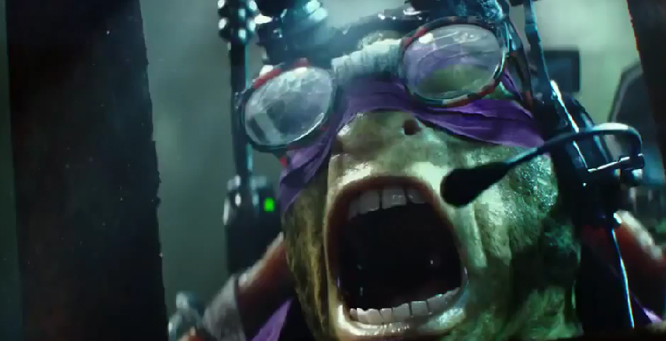 This face was made by Donatello when he couldn’t find out who was playing Shredder. Not knowing things hurts.

Again, thank goodness the internet rose up and demanded a better film. The turtles themselves are pretty loyal to the source material. Each turtle has his established personality traits and they all shine through nicely. As a team, they also seem to work really well together. Their chemistry was good and one of the better parts in the movie.

In fact, there are quite a few amusing/funny scenes scattered throughout. One “rap” scene in particular was well done (and no, not the Ninja Rap redone or whatever, that is just some bullshit credits thing). I also enjoyed a lot a mini-monologue by Raphael near the end. In terms of fight scenes, the most fleshed out fight scene is the going down the snow mountain one, which has a lot going on. All the fights before that are too dark and shadowy or feature too many quick changes. The final fight scene, with one cool moment, kind of just felt like how I play Soul Calibur. Since no one will get that joke, I ring out people like crazy.

Shredder was mostly in his ridiculous armor and never really showed off his actual skills, so that was annoying. I am mixed on whether or not I liked Splinter. Definitely unique.

A lot of fans are going to find the changes to the origin annoying, I predict. I am fine with the change, even though I like the original because then they can reference Dare Devil more. But it is fine.

Oh yeah. Fox? Not terrible, not great. Disappointed in Arnett’s role. He has a look for a guy that could be Casey Jones if he had longer hair, he just…is annoying in this one. I more or less hate how they look. Going for realism kind of make them just look gross. See the Donatello picture above.