Ahh, Nerd movies! Not movies nerds would like. Nope, movies about nerds. The first two over the last few weeks were Lloyd the Conqueror then Knights of Badassdom. Now we have Zero Charisma. Given the way my site has been going lately, it only seemed natural that I had to watch and review this bad boy as soon as possible.

It even has a clever title. Zero Charisma. That tells us a lot about the movie. We are going to be dealing with someone very unpleasant, so get prepared. 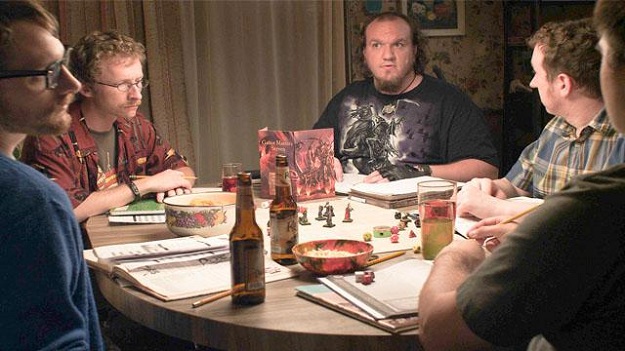 Hah, who role plays without TVs or graphics anymore? What silly nerds.

Who is that unpleasant individual? Why, it Scott (Sam Eidson), who is overweight, living at home with his grandmother. He doesn’t have a job anymore, he got fired from the local gamestore. He wants to publish a game system he has been working on for a few years, but no publishers seem to care. But at least he has his weekly game group, yeah!

Except one of the regulars has to leave, because his wife is leaving him. Shit, hard to blame him then. But now he has a spot to fill, and no one wants to join the group because people kind of hate him. But then Miles (Garrett Graham) walks into the store. He apparently is into home brew campaigns, so agrees. Miles is great though, kind of a hipster. He is nice to people, has good stories, roleplays really well, and even created a nerdy website that is pretty popular. Shit. Everyone likes Miles, and not Scott, so Scott gets even more upset than normal. He even might…gasp…cheat.

At the same time, his grandma (Anne Gee Byrd) has a stroke, so his mother (Cyndi Williams) is staying in their house for the time being. She wants to sell the house, but that would make Scott homeless. She also hates his gaming, and makes his life even more unpleasant.

If Scott lashes out against everyone he knows, even his heroes, will even his best friend (Brock England) no longer support him? 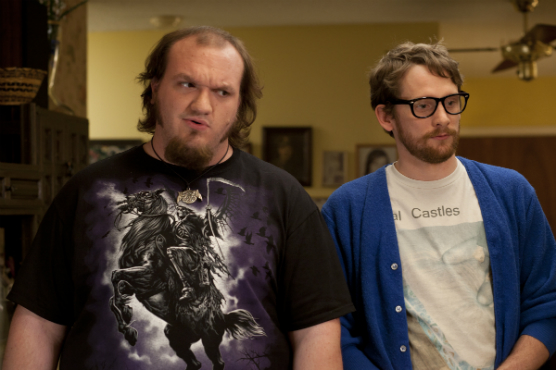 Damn, Miles does look cool. Almost like James Franco. I’d rather play with him too.

One thing this movie definitely got right was the culture around RPGs in general. There are several types of people in this movie and they are all starkly based on reality. I guess you could call them stereotypes, but for us gamers, we all know someone like some of the people in this movie.

The main character is indeed an asshole, and he is an asshole the entire film. Many tantrums are had. Despite its level of “Realism” character wise, which a lot of indie movies do strive for, there is something else missing from this movie entirely. The entertainment aspect. Sure, early on, parts are entertaining, but it starts to dull out in my eyes and never really feels like I need to be watching it. Just a man digging deeper and deeper into his social outcast hole.

I’d be fine with that, depending on how it ended, but the ending came almost out of no where. The character showed a little bit of growth, maybe. But not a lot, and it seems like he was rewarded for being a jerk. He had to change his surroundings, but he is arguably in a better position by the end than he was at the beginning of the movie, so he basically learned nothing. So you know, its an okay movie. I guess.