Readers, don’t judge me. But when a movie has such a succinct and eye catching title, can you really blame a person for being curious about the movie?

Literally, Asian School Girls seems to just be able high school Asian women who have to defeat bad guys and kill them. Very simple plot from the cover. That is all I knew going in!

And so this will be a short review. Mostly because I can’t find any pictures of it on the internet.

Basically, four girls (Sam Aotaki, Catherine Hyein Kim, Belle Hengsathorn, Minnie Scarlet) of which whose ethnicity you can guess go to a night club despite high school status. They have fake IDs! During the night, they are invited by two handsome men to come hang out at their place. Unfortunately, it was all a set up where they instead are drugged and raped.

This causes one of them to commit suicide. In grief, and anger at a police department who doesn’t seem to be able to help (Andray Johnson), they decide to get some weapons and enact their own revenge.

They just need money first, so you know, they become strippers, and then eventually kill some people. 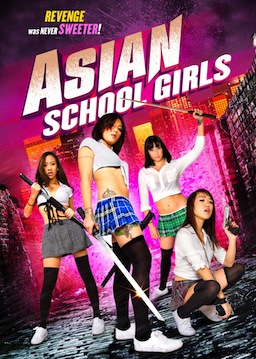 Accidentally misleading, since only three of the four go on the killing spree.

Oh boy. This movie started off rough, and kept its sandpaper level quality. First thing I found out about this movie was that it was made by The Asylum. They make a lot of low budget straight to DVD crap, selling bad graphics and sex, movies that are titled eerily similar to bigger blockbusters, and of course fucking Sharknado.

It was extremely hard to pay attention to this movie filled with no substance and terrible action. That’s right, a movie about revenge and killing bad guys has terrible action. Some of it is graphic sure, but most of it is shit.

This movie does have copious amounts of nudity. Way too much, since it is all just awkwardly long stripping scenes for the most part. Speaking of awkward, they threw in a lesbian scene too for shits and giggles.

Yeah, skip this movie. I knew it should have been terrible. But eh, sometimes I just give things the benefit of the doubt.