I have about three movies that I have been putting off, all with ice in the title. No idea why I have been waiting. Especially during this horrible heat wave. Maybe watching more movies about snow would be a good thing?

Thin Ice at least sounds like it will have some sort of scary element. No one wants to skate on Thin Ice. Shit can break man, and then what? You are in cold water. 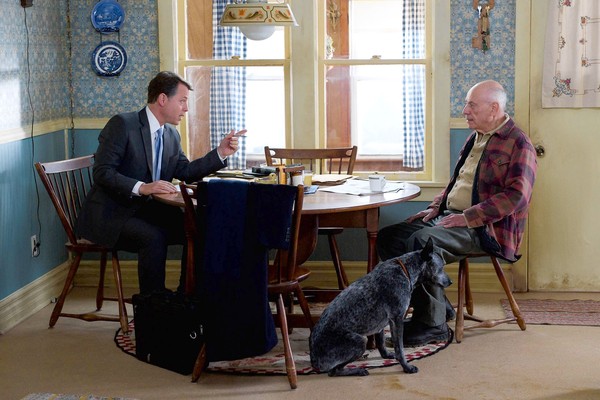 I would now like to go over the paperwork assigned to this honey theory of yours.

Liability insurance agent Mickey Prohaska (Greg Kinnear) is a hot shot in the sales world. He even teaches seminars to people around the state of Minnesota on how to initiate conversations with strangers at bars and other public outings. Everyone is a potential customer. Everyone should be taken for as much money as possible, no exceptions.

After a rough night, where a con artist woman had stolen his wallet, he just wants to get the heck out of this small town. He re meets Bob Egan (David Harbour), a promising new sales man, and gives him a job from his company to sell in his town. On a routine visit, he joins Bob to an older mans cain to show him how to extort people for the most money. Screw this friendly bull shit. Gorvy Hauer (Alan Arkin) is extremely absent minded, wants to pay in change, keeps forgetting what is going on. After a small deal is made, Mickey finds out that Gorvy holds a potential very rare violin, from a local music shop owner (Bob Balaban). Its initial appraisal puts it a $25,000, but eventually they find out its actual rarity puts it at over a million.

Mickey freaks out, in huge money trouble, and potential divorce from his wife (Lea Thompson), so he sets about on a scheme to take the violin and sell it on his own. But at the same time, thanks to nice Bob, Gorvy gets a security system set up in his house. Shit. Mickey then begins to try and convince Randy (Billy Crudup) to work with him on stealing the violin, splitting some profits potential. But then things get out of hand. Someone dies. Cover up. Bad mojo. Escalation. Everything potentially going wrong. And an ever suspicious office assistant (Michelle Arthur). 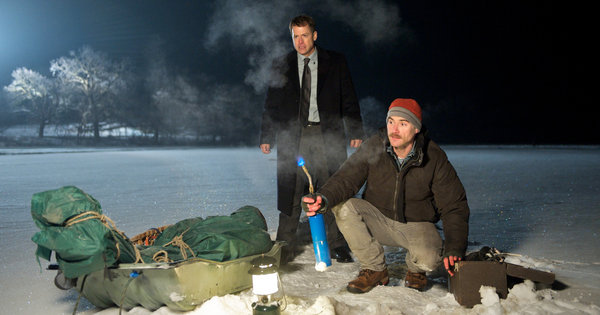 No wood chipper? No problem. Can always hide bodies in a frozen lake.

Turns out when this movie was hitting the film festivals, it was called The Convincer. Not the best title, but people thought it was decent. It was sold to a studio, fine print wasn’t read, and bam, lots of things changed. Apparently over 20 minutes of scenes were cut, multiple scenes with the main actors had to be re shot, and other changes. The director was so distraught she wanted her name off of the movie.

But I obviously saw the Thin Ice version, and reserve my right to change my mind should I see The Convincer, but I loved this one.

Why? Well for one, it is basically the sequel to Fargo. People die, its up north, snow, Midwest accents, etc. Involves schemes to make money by screwing other people, and quirky natives. It features no one from Fargo, but who cares? This film was clearly inspired by it.

I thought the ending was pretty great, didn’t really see it coming, and loved the escalation of events. Sucks that the director got wronged, but man, I doubt the other version was that much better or different.