For the most part, I try to avoid reading a book if I know it is going to turn into a movie. Or even worse, just try to read a book right before watching the movie. I can’t stand it, I will go into the movie with biases, and the movie won’t be able to surprise me.

I don’t know if I would have been able to cry during The Fault In Our Stars had I read the book! And those were some good tears.

But I read Pride and Prejudice and Zombies. I think I read it in 2010, before I started writing reviews, with the actual book coming out in 2009. I read the entire book the whole way though, and then quickly got rid of it. I paid full price for it and gave it away for free. It was dreadful trash and I couldn’t stand it. I only finished it because I assumed it had to get better, there had to be reason for the success.

The book was about 80% original Pride and Prejudice and about 20% the author changing some scenes and throwing in zombie fights. Every time the author switched it was so jarring, going from well written to complete trash. All it made me do was appreciate Pride and Prejudice more and vow to not read any of the other mashups that would exist, no matter how popular.

Needless to say, I am going into this movie incredibly biased. And also I am in general surprised that it took 7 years for this film to get made. 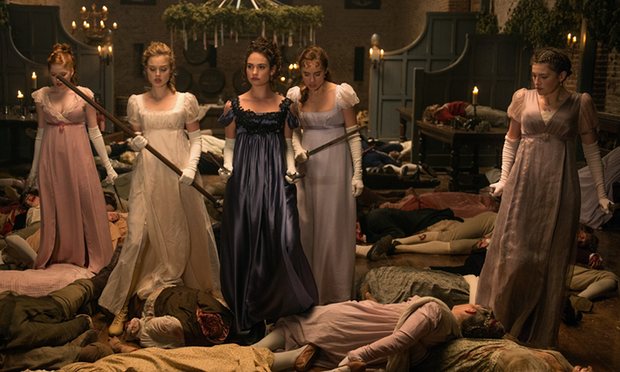 Well, you know what they say. You cannot spell Slaughter without Laughter.

What is a patriarch (Charles Dance) and matriarch (Sally Phillips) gotta do when they have five daughters, all of viable marriage age, needing husbands to take care of them?

Their oldest daughter is Jane (Bella Heathcote), but everyone knows their best daughter is Elizabeth (Lily James), despite her strong wills. The other three daughters, Lydia (Ellie Bamber), Mary (Millie Brady), and Kitty (Suki Waterhouse), are around but not super important.

Jane falling for one Mr. Bingley (Douglas Booth) is important though, as he falls for her as well. Now the parents can meddle and force a marriage. When they meet Bingley, they also meet Colonel Darcy (Sam Riley), whom is seen as a pompous and arrogant person, but also wealthy as fuck. And you know, he can kill a zombie like no other it is said. 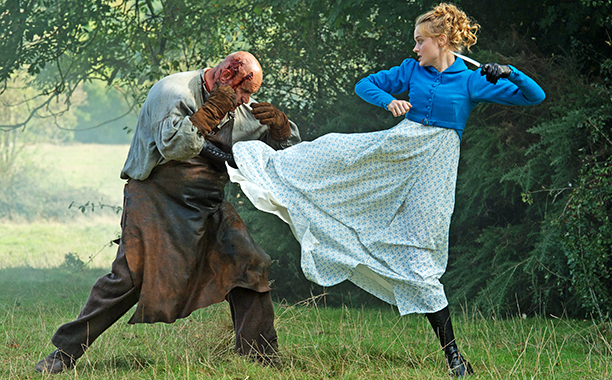 Kicks to the chest also can be quite deadly, apparently.

Fuck. Just fuck. I feel like this movie was actually worse than I imagined. I imagined it would have bad acting, sure. I imagined it would shit on something I find enjoyable, yeah. I imagined the CGI wouldn’t be top notch and a lot of corners would be cut when it comes to fight choreography, of course. But on top of everything, I also didn’t think it would be Boring. As. Fuck.

Say what I will about Abraham Lincoln Vampire Hunter (and of course I did), but at least there was an inherent entertainment level there. At least I could sit in the theater and laugh at some of the more ridiculous scenes. But with watching this film on DVD, I found myself constantly wanting to pause to get a drink, go to the bathroom, spin in my chair. I wish my laptop worked so I could have laid down in my comfortable bed and fallen asleep to the movie, instead of actually watching all 90ish minutes.

I think it is notable to mention when you fall asleep in a film, which usually happens only in theaters for me. But I know I would have passed out for a lot of this movie if I was watching it while feeling any bit comfortable.

Everything about it is magnified so much, because of how interesting the story becomes. I get annoyed at the bad fight scenes. Annoyed at the acting. Sam Riley as Mr. Darcy? They picked a guy, who decided to give a raspy voice performance and absolutely no sex appeal in a role that is still very much technically in the romance genre? Riley is not my Darcy. The cast for most of the parts in this film is just the final nail in the coffin.

But let’s end this on a fun fact. Emma Greenwell plays one of the three younger sisters. I already forgot who. But she also was in the movie Love & Friendship, also out this year, and also based on a Jane Austen novella. How cute.

What better way to celebrate the American Independence Day than with a movie entitled Outsourced?

Har har har. The title probably sounds familiar, because NBC later took the movie and turned it into a sitcom. Only lasted a season, but was pretty funny. Same concept, names same for characters and everything. Just a bit more comedic vs serious.

I am sure I never would have heard of this movie if it wasn’t for the show. Just hoping it isn’t completely identical to show, I wouldn’t want to know everything that happens already. 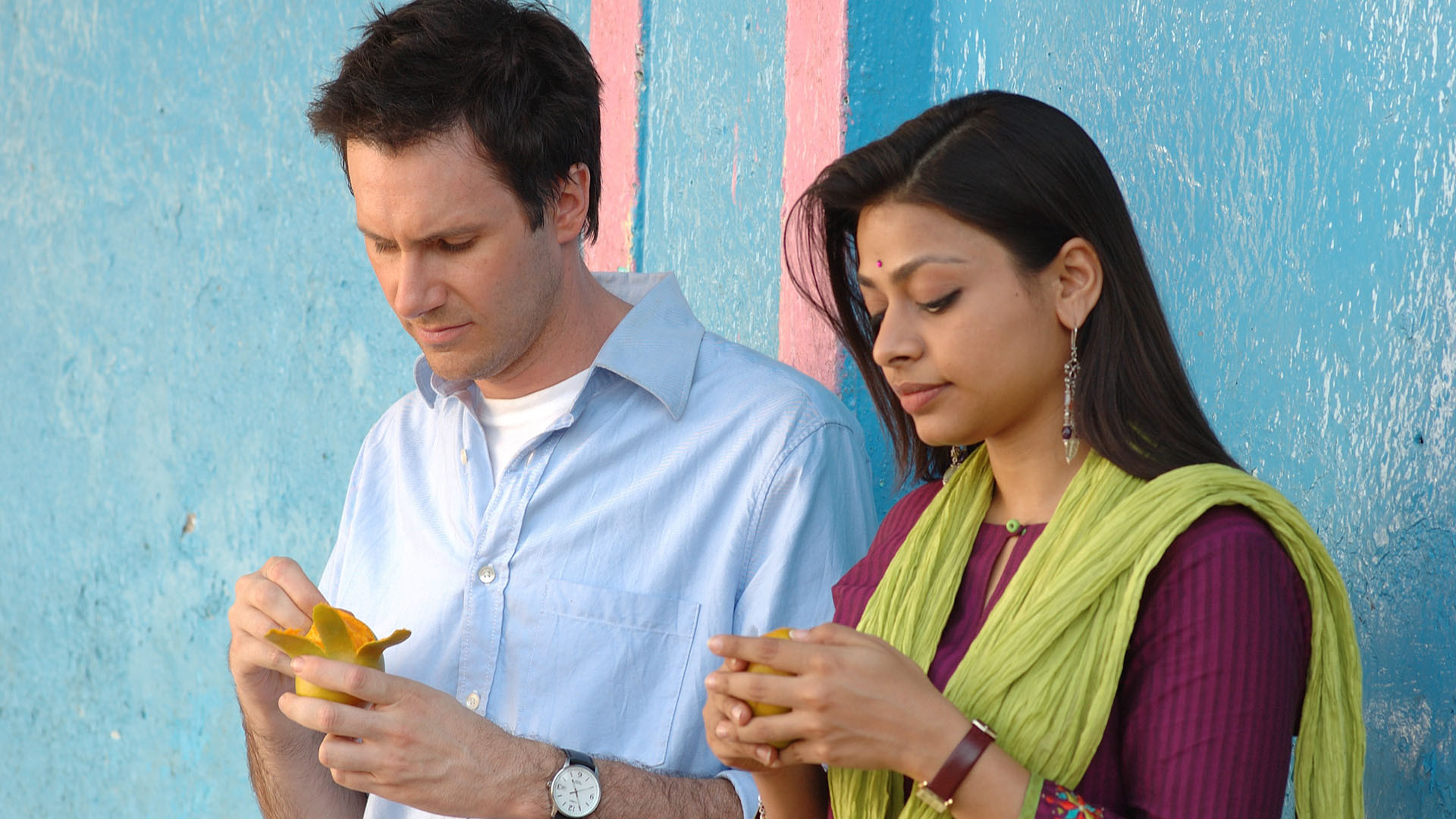 Todd (Josh Hamilton) works in a call center in America. His company is weird, sells only novelty knick knacks to the United States. Sure, most of it is made in China, but you might need an American Flag lamp. Well his division is getting shut down, but don’t worry, his boss (Matt Smith) is giving him a promotion! To India, to go to their call center there to increase their efficiency. Make them more American, and sound American, so callers wont get mad.

He agrees, after he fixes up India, he will get an offer somewhere else higher in the company. Seems good. Especially when the other option is quitting and trying to find another job in this economy. Yuck! Next thing we know, India! He is met by Puro (Asif Basra), the manager who will be in charge when Todd is done, who wants to learn all he can. Puro, once he is a successful manager, will be able to marry and care for the woman of his dreams. In the group there is also the outspoken Asha (Ayesha Dharker), who is very blunt with her criticisms of her new boss, his attitude in India, and in her confusion with American customs.

So as expected, the movie is based in cultural humor and of a man discovering himself in India. He can’t just teach them about America and expect them to get it, he has to embrace himself as an Indian to better relate and teach them. Hard to sell jokes if they don’t get the same jokes. 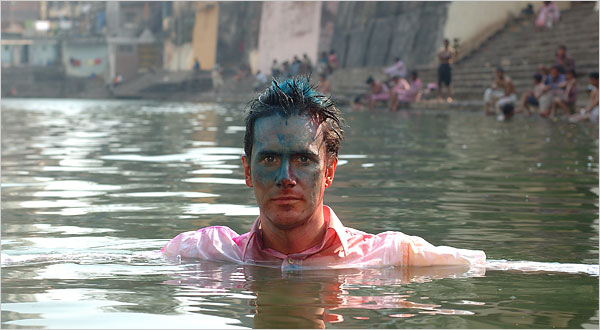 Holi is a crazy holiday. Sometimes it requires reflection.

Writing that plot felt weird, mostly because it was just the same as the Outsourced show, but it ends after the movie. Since the show got canceled unexpectedly, it is interesting to watch the movie to see probably where the show was going. A pretty fucked up, yet also completely acceptable, ending.

I was originally going to give it a 3 out of 4, as I thought it was really well done, but while trying to talk about the plot, I found myself getting a bit bored. The film allows for a lot of quiet moments, and although amusing and interesting, I realized I probably wont watch it again. Not sure if the jokes have lasting power, and with no other plot surprises, just loses a bit of longevity.

It is a shame, because it is well acted and at least spawned an almost successful series. It is unfortunate that most people who see the movie would have to compare it to the show, where it is easier to relate and connect with all of the characters (more time). I mean, I cant even name another office worker, except for Manmeat, whose role is significantly downplayed in the movie, ie just someone who flirts with women over the phone.

But hey, definitely an interesting movie/message, involving and starring India itself.