This time, it was Forks Over Knives, recommended by someone to my fiance, so of course I said I would watch it too. It is in my range, came out in 2011. Title was a bit weird, mostly because I didn’t see the need for my cutlery to battle. I prefer them to work together in harmony. Where the fuck are my spoons at??? Represent!

Alright, so the tagline of this movie on its cover is “Warning! This movie could save your life”. Good, time to be a skeptic.

I will admit the beginning of the movie was a bit more interesting. The “reason” for this documentary is because the director Lee Fulkerson wanted to be healthier than he is, so he goes on a journey of self discovery that, miraculously, a lot of people have published papers on recently at the time of his documentary.

Long story short, Veganism. Or as they called it a “plant-based diet” void of meats and dairy. So you know, Veganism. There were studies that were interesting, showing people who switched over and got healthier. Studies that reported the same findings. They spent a lot of time talking about Cancer and China, because there was a “Cancer Atlas” or something, that showed cancer abundance over the entirety of China for each type. They related this to diet somehow too. 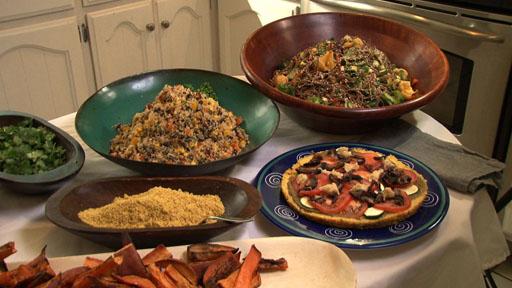 The one study I found really interesting was the one about Norway during WW2. Basically, because all documentaries need to mention Hitler, the Nazis invaded Norway, and fucked them up. They took away their meat and the citizens had to start eating basically just plants. Then a lot of diseases went away like the next year, instantly, and it had a drastic downgrade. Huh. Cool.

But if that was true, I wasn’t really ready to believe it. So I went and looked it up! Science bitches! Basically, I found that it was pretty misleading. The Nazis took away a lot of things. Like cigarettes, so there was a country wide shortage, a lot less smoking. They also increased in physical activity, so people had to move a lot more, doing healthy things. Shit, blaming it all on meat is kind of awkward, no?

Getting to that study lead me to this other “review” of the movie by MD Harriet Hall over at www.sciencebasedmedicine.org. Harriet looks at every claim and study the movie mentions, notes the inefficiencies of the studies (low sample size, no controls, whatever) and where the movie people make broad claims where the studies do not themselves.

So basically, OP is a liar.

Damn it, I hate bad science movies so damn much. Obviously this documentary would be biased, all of them are, but finding out how biased is just the worst. At least they didn’t also alter or have misleading interviews like another terrible science documentary.

You know there is an issue with a documentary if they seem to claim that humans were meant to be herbivores, not omnivores. Bitch, I know what these canines in my mouth are for.

So most of the claims are incorrect. Is Veganism healthier overall? Probably in some aspects. But it seems the science really goes towards living a healthy lifestyle, eating just not a shit ton of meat and diary, but still having it in your diet. Basically, increase fruit and vegetable intact will probably be the better results here, not an elimination of animal products completely.