Fury. Finally. I have said a few times I wanted more TV shows and movies based around basic human emotions. We had Glee, and we had Rage? What about Fear? What about Sorrow? And so now we get Fury.

In all honesty, I feel like it has been a good while since I have seen a really good war movie. Too many things focused on Iraq and Afghanistan that are all over the place in terms of quality. I guess I enjoyed Lone Survivor, but that wasn’t a super long epic war movie, a la Saving Private Ryan.

I mean, the last thing we got was The Monuments Men, and everyone know how great that ended up being. Just saying, a lot of pressure on Fury, and they have to start with an uphill battle, because they put Shia LaBeouf in it. 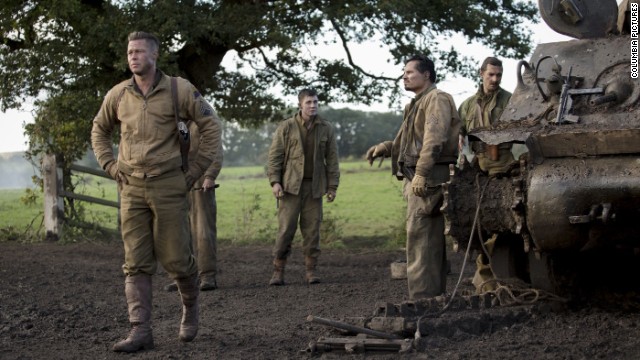 There he is, hiding in the back, behind that mustache.

War is hard. Just ask the former assistant driver of the Fury tank. Well, you’d be able to if his face wasn’t blown off. That sucks. They liked him. He has been with them for years. Sergeant Don ‘Wardaddy’ Collier (Brad Pitt) promised his team that he would always keep them safe and he has finally broken his word. It was only a matter of time. Sure, it is now April fucking 1945, the war almost over. But the Germans keep fighting back, despite the allied forces on their doorstep in their country.

So now they are a man down, but only temporarily. Their replacement is the young Norman Ellison (Logan Lerman). Eight weeks into the army, hardly a man, he is going to have to learn to grow up and quick. Especially with a bunch of Germans surrounding them, and four pissed off Americans sharing a cramped space with him. Like other assistant driver/gunner Gordo (Michael Pena), main gun shooter guy Bible (LaBeouf), and big missile loader crazy man Coon-Ass (Jon Bernthal).

Oh and hey. The Germans have better tanks. Better defended, better missiles. And they aren’t as spread out. And their equipment isn’t outdated. So yeah. The tank, Fury, has a lot going against it. And now they got a kid who hasn’t even killed a man. Basically a death wish keeping him around.

But war is hard and surviving it is even harder.

And don’t worry, there are other tanks. And other soldiers. Some of which are acted by Jim Parrack, Kevin Vance, and Brad William Henke. For diversity sake.

But Americans have some lasers on their tanks, so it should all even out in the long run.

But this one has exceptional acting talent behind it as well. From the bottom up. LaBeouf? Eh. He is better at pieces set in the past. I didn’t hate him by the end. Bernthal? Probably his best work. Pena? It is surprising how well of an actor he has been over the last few years, given his start. No difference here. Lerman? Not just a Percy Jackson looking kid anymore. He conveyed a huge range of emotions. Pitt? I’d watch Pitt watch paint dry for 2 hours and probably give that film 2 thumbs up. I’d watch him make tea and then refuse to drink it for five hours. Does he make bad movies? I mean, even Mr. and Mrs. Smith has some redeeming qualities.

This is an extremely violent film, as you would imagine based on title and plot. I personally only thought “Boom! Headshot!” once or twice throughout the whole film, despite the large number of them. They were just so shocking and gross.

The film isn’t just war torn countryside and fighting. There are periods of downtime, including one extremely long scene in a conquered German city. The type of scene that reminded me of something Quentin Tarantino would do. That could just be because of Pitt/Inglourious Basterds though.

I honestly went in expecting a movie that might have gotten a bit too anti-war preachy. One that didn’t give me the best acting. I don’t know what I was smoking. Fury is now one of my new homeboys.

Yay! Finally, we are getting a movie version of the Beastie Boy’s song Sabotage. I am also immediately killing that joke before it gets too stupid. I don’t even like that song. Too hard for me, I guess.

The actual movie Sabotage is the next attempt for Arnold Schwarzenegger to get back into action. I think I saw the trailer once before a month or two ago, so going into it, I really didn’t remember at all what I was about to watch. That was a good feeling. I did learn right before that the director also directed and wrote End Of Watch, which I loved so I did get all sorts of excited. A great underrated movie from two years ago. 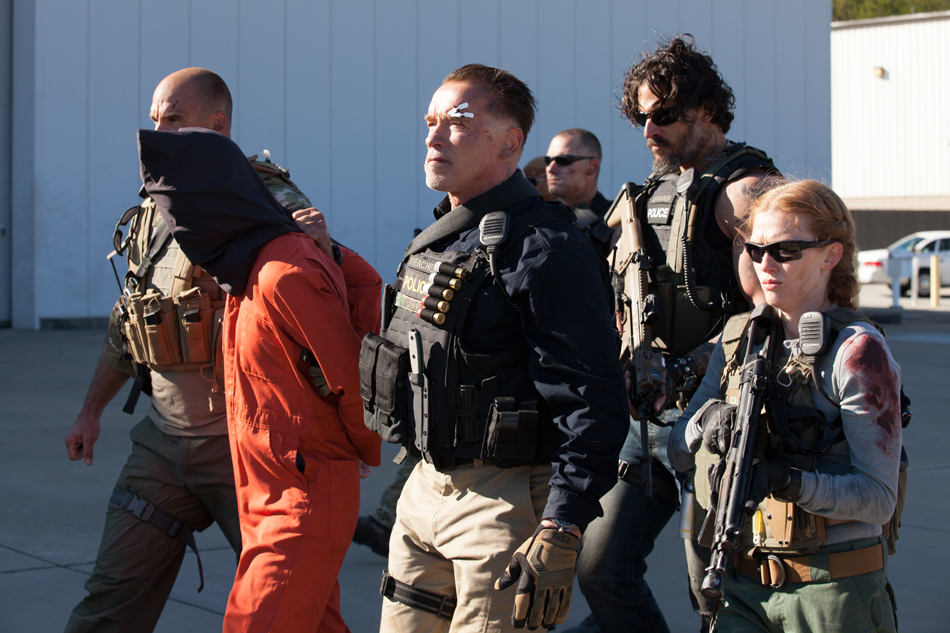 Aw shit. Here is them with presumably the bad guy. I guess they all win, spoilers!

The story is about a special operations DEA team who are really good at getting the job done. They are lead by Breacher (Schwarzenegger) and they all get snazzy nicknames too, because they are cool. They also have Tripod (Kevin Vance), Monster (Sam Worthington), Grinder (Joe Manganiello), Neck (Josh Holloway), Sugar (Terrence Howard), Pyro (Max Martini) and Lizzie (Mireille Enos). She doesn’t get a nickname presumably because she is a woman.

Oh, they might be a little bit dirty too. Not The Shield levels of dirty, but a little bit dirty. The story begins with them taking down a huge drug lord, but also stealing a measly ten million from the pile and stashing it to split amongst the team later. Well, someone dies during their operation, and later the money is gone as well, so it the drug bust was a bust. Especially when they all go under the microscope, with the ten million reported missing.

Well, eventually they all survive and since no one trusts Breacher in the department that much, they just let him have his team back for special missions. Then, one of their own dies.

Shit. Then another. Turns out someone is trying to take them out. But why? They have tons of enemies, it could be anyone. But local cop people (Olivia Williams, Harold Perrineau) are on the case, so I am sure they will stop the bad guys. 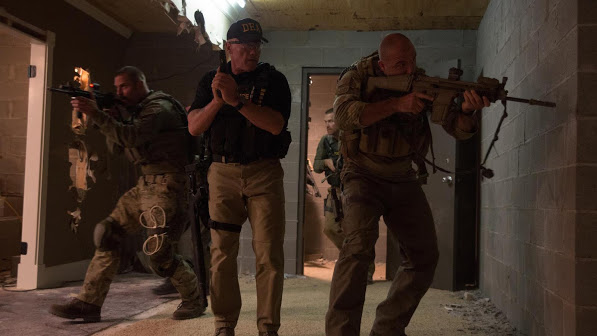 Many guns. Both the actual weapons and these gentleman arms.

Pew pew pew! Action and death. This film really earns that R rating with the amount of graphic violence (extreme deaths), language, and nudity in it. Some of it was indeed really gross too.

On the same note, the story itself was interesting. Yeah, I said it. I liked the plot of this movie. It wasn’t a simple story, it had some layers, and characters had motivations. At the same time, some characters had absolutely no motivations and even by the end, I am not sure why they did what they did.

In fact, the climactic ending complete with a chase scene and finding out who the bad guys are was very disappointing. It doesn’t match the tone of the rest of the movie. It was drawn out and suddenly no one knew how to aim, despite being tactical and military elites.

So that is that. It has some cool stuff. But the ending is pretty lame. There ya go.