Still Alice is another one of those movies that got leaked from Sony ahead of time. But no one cared about Still Alice. They only cared about Fury and Annie.

Personally, I hadn’t heard of the movie at all. It sounds creepy I guess.

But then I heard about buzz for best actress and maybe supporting actress, so I figured I’d watch it earlier than planned. I need all the help I can get in the potential Best Actress category. For whatever reason (sexism?), the movies that get nominated for Best Actress don’t often get nominated for a lot of other rewards. Last year is a poor example, and I might be talking out of my ass, but I think it is true.

At the very least, when I look back on the nominations for Best Actress in the past, I notice that I have seen significantly less of them than others. That sucks. Maybe I am just not as interested in super great female acting performances? Hard to say.

Either way, I am ready to be wowed, way more than I was ready for Mr. Turner. 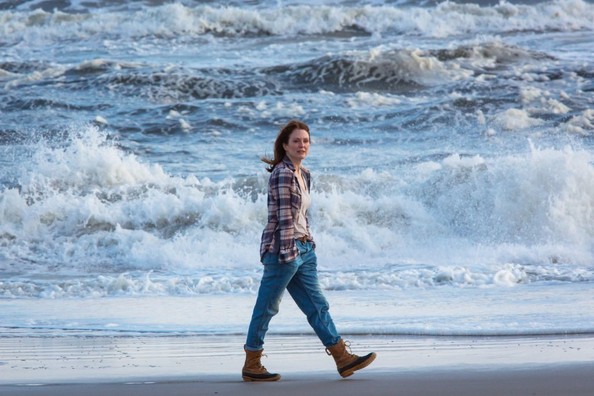 This is a story about Alzheimer’s Disease. Some people argue it is the saddest of the diseases. It is sadder than Cancer, AIDS, and definitely sadder than Alcoholism. It definitely worked for Barney’s Version, which was a lot better than the cover gave it credit for.

Three whole kids! None of them are half. A daughter (Kate Bosworth) who is infertile, sure, but married and going to get one of those science babies with her husband (Shane McRae). A boy (Hunter Parrish) who also is successful with college and all. And a third child. Ugh. A younger daughter (Kristen Stewart), who doesn’t want to do college and wants to be an actress. Gross gross gross.

Either way. Alice starts to forget shit. Sometimes blurry vision. She talks to a neurologist (Stephen Kunken), and yep. She has an early form of Alzheimer’s, rare genetic version. Which has its own complications.

And you know. Other sad things! 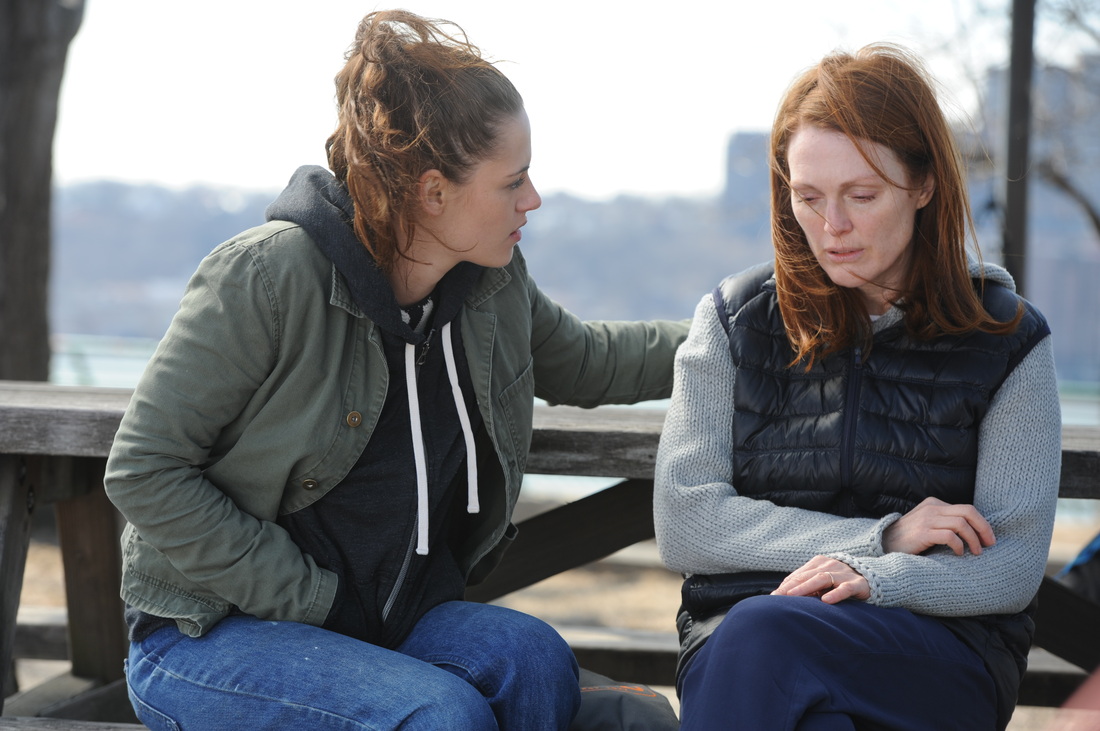 Like Vests, the saddest articles of clothing I could imagine.

Ah shit. Sadness. Like man. I cried a couple times. Damn empathy. I used to not feel sad over getting older type stories. But here we go. Getting older. Having a family. Genetics. Diseases. Losing and forgetting memories.

I already mentioned that I liked Barney’s Version, for whatever reason the only Alzheimer’s based movie I could thing of. It was great for Paul Giamatti in the titular role, but it is not something I have ever tried to watch over the last three years. Maybe in another five I will watch it again. But man, Still Alice was really really damn good. The story itself shows the decay in a natural and fantastic way. Also a bit scary. Not a thriller, but man, losing the memories that you are trying so hard to maintain. Being such a smart individual and losing what made you feel unique and special? That is scary. I don’t want to get old and have that happen to me. I don’t want my parents to forget I exist.

Also, Julianne Fucking Moore. Before this movie, I could only guess that maybe Rosamund Pike might win it from Gone Girl. Despite how great she is in that role, Moore is so much better. I haven’t seen Wild. I haven’t seen Cake. But I can’t imagine any performance as good as hers (and I was equally vocal about Cate Blanchette eventually winning last year).

Kristen Stewart was in this movie, and I didn’t think she will win any awards, but she wasn’t terrible or anything. Some of you might be thinking that you are surprised she was in a 4 out of 4 movie before Robert Pattinson. But you’d be wrong, because I really really enjoyed Harry Potter and the Goblet of Fire.

17 Again is of course not an original plot. A lot of movies have an older person relive their youth, and find out they actually had it good. Sometimes, they get to become old instead. And also other times, they just switch bodies, such as 18 Again! the movie I first heard of when I read about this one.

I got to see 18 Again! when I was about ten, and probably only really remember any of the plot because hey, there were boobs in it (and it was PG?). Score! 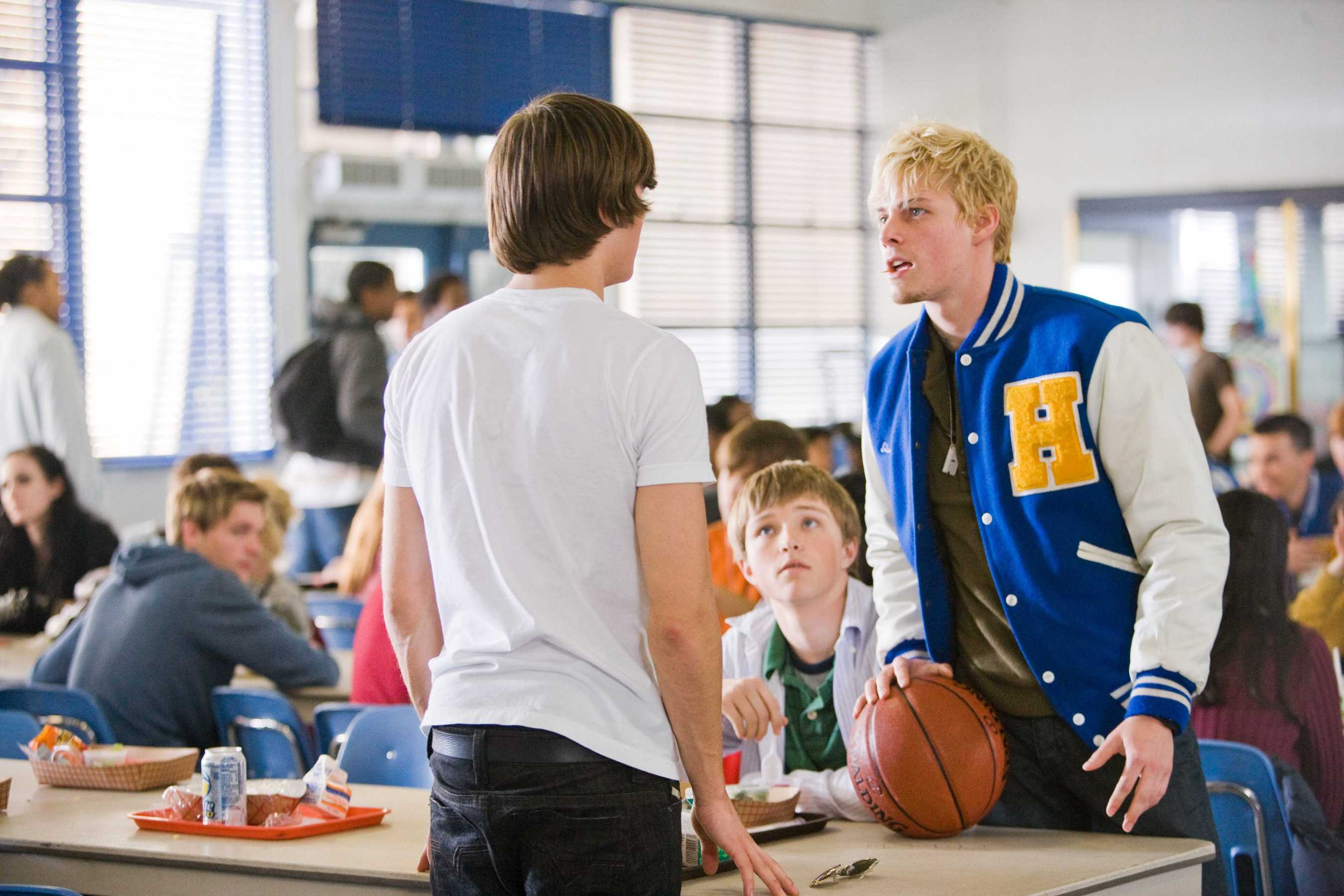 Silly kids, you can’t score points in a cafeteria. You have to use a gym!

Back in the late 80s, Mike (Zac Efron) was a stud. Everyone loved him, nice guy, star of basketball team. But during the game when scouts were on hand to see him, it all went to hell. He found out his girlfriend was pregnant, and to comfort her, he left the game and proposed on the spot, pledging to be the best dad to the kid.

Like, 20 years later, and he has turned into Matthew Perry. He has worked for the same company for 16 years and nothing to show for it. He has two kids now, Alex (Sterling Knight), a shy teenage boy who doesn’t have many friends, and Maggie (Michelle Trachtenberg), a girl who might be dating a bully (Hunter Parrish). And well, his wife (Leslie Mann) now wants a divorce.

Turns out he blames her for the life he is in. If he didn’t go after he, he could have gone to college and been a star maybe. Way to take it out on your wife, jerk face. So he currently lives with his (now rich) best friend from high school (Thomas Lennon) and has a bad relationship with his family. But due to some random magic he finds himself as his 17 year old self again! After the awkward realization, he now sees it as a way to fix his life. Maybe actually stay as the young version and get a do over.

Or maybe, fix his real life. He is now going to school with his kids. Can he warn his daughter and student body about teenage pregnancy and its effects on life? Can he help his son finally fit in? Can he actually fix his marriage? Why is Jim Gaffigan playing a high school coach, when he is the type of guy who never would work out? Can he help his friend get with the school principal (Melora Hardin)? Okay, that probably isn’t a priority. 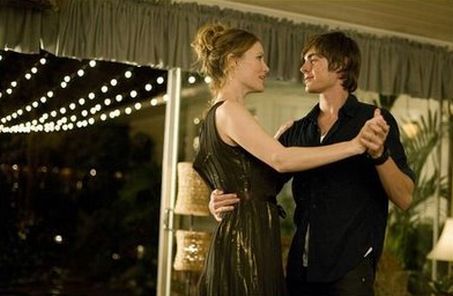 “Do you dance with all of your friend’s mothers?”

So what did he chose?! Of course he decided fuck all his responsibilities, time to go to college and get those chicks and money. Right? Who wouldn’t.

But that would be crazy. So instead we got an older guy, trying to not get his daughter attracted to him, and not fuck up his life completely. Overall it did have some interesting moments, but it was pretty easy to tell what was going to happen the whole time. Can’t say I saw any part of the friend/principal relationship coming though, that was weird.

The movie is a decent one, nice resolution, but overall doesn’t offer much new to the genre. So besides that, uhh, watch if you want I guess.

Hmm. This is a movie I really wanted to like. Who doesn’t like Alec Baldwin, I mean, come on!

The story is the one as old as time…a divorced couple of about 10 years want to have an affair with each other. Lots and lots of old people sex. “Old people” being of course kind of a ridiculous concept here. In fact, you may even describe their relationship as…. Complicated! It was an interesting smorgasbord of actors/actresses who played their children (/children in law) including Jim from the Office and the Silas from Weeds.

Steve Martin also being the sort of antagonist was weird as well. He has always been a “jerk” but never in this light. 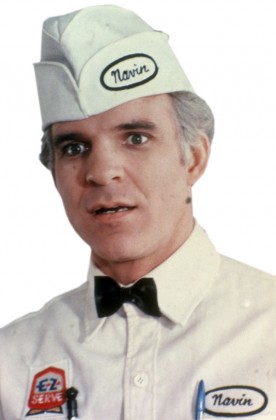 Only joke here is the pun on name for a soda fountain operator. Get it? Get it? Fuck you.

The best performances are of course from Baldwin and Streep, who are very convincing at their portrayals. They are great at these roles. Unfortunately just having well done acting is not the end all be all of a movie. It also has to be a bit more interesting. It is weird that when Streep is freaking out that she is sexing up Baldwin, she calls it an affair. She isn’t cheating on anyone, but Alec is. I guess she has a higher moral ground than myself.