Sometimes life is hard. I get that. Life is hard over here sometimes too.

But movies tend to be great escapes from life, telling great stories, increasing your imagination. But then we have documentaries that bring reality crashing back down. They remind us that things aren’t always easy in the world, or that things aren’t so bad.

Rotisserie Chicken is a Netflix original movie that was only available for one day through its services. Personally I think that is because people couldn’t deal with the truths that were being shown. It created such a broad range of emotions. Anger. Apathy. Giddiness. Confusion. Hysteria. Glee. Depression. I have never seen such a polarizing movie, not since Napoleon Dynamite or something by Terrence Malick. 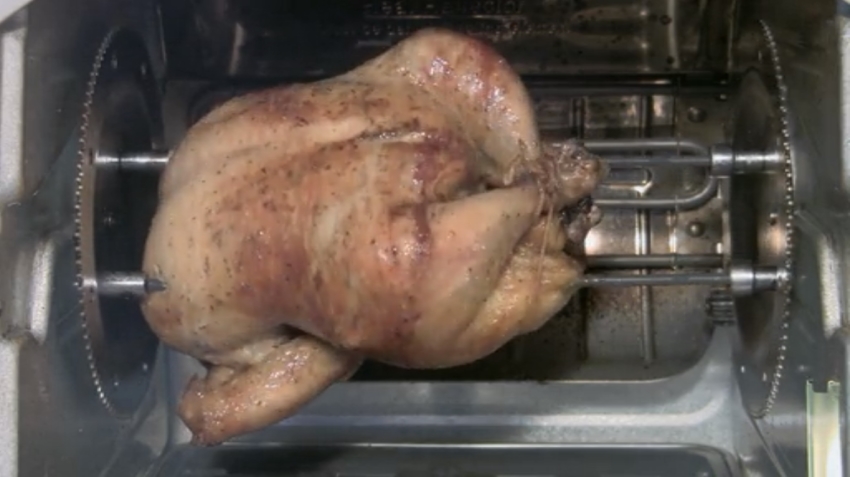 Speaking of that, I heard Terrence Malick hates chicken. Get him!

The story itself is relatively simple. You have a cooked turkey, almost at the end of its journey in the afterlife. It is basically a retelling of the end of the journey, but in reverse, so you know the outcome before you begin. Never has a backwards story been so real (after all, a documentary), yet so relevant to the lives of almost everyone in the world.

The chicken, that was set up and forgotten in its prison, roasting.

You want character development/change? You get that in this movie! It is slow/gradual, but if you pay attention you can see the changes as they occur. If you look away, you might have missed a lot and are left wondering how you even got to that point in the first place. Definitely a film that commands your full attention.

For those unlucky enough to have missed this opportunity, I am not sure what I can say. I guess I hope it doesn’t come back to bite you in the ass some day or cause you to live in regret. That would be terrible.

But really, you should feel regret if you missed it.