I know, I know, I’ve been reviewing too many movies lately. And I know, I know, recently I reviewed Teen Beach 2, a Disney Channel original movie, but that was for a special occasion. It and its predecessor were milestone reviews, and thus, weird things were acceptable. Add in High School Musical and you will see the only Disney Channel Original movies I have reviewed have been musicals.

So why Descendants? Is it just to confuse my readers who might it get confused with the amazing The Descendants? Nope. It is because I used to watch these movies all the time. Not to show my age, but the new monthly movie used to be something special. (WARNING! WARNING! NOSTALGIA APPROACHING!) I was able to see things like Zenon, The Luck of the Irish, Motorcrossed, Cadet Kelly and more. I am not including Halloweentown, because Halloweentown sucked.

And you know what, those films are probably terrible now. But maybe Descendants is just like them. The plot has potential for an adult to enjoy. Maybe it is better than them. Maybe they can make a decent film that involves no music.

Alternatively, someone should review every single one of these films, while drunk. I am sure your website would get way more visitors than my own. 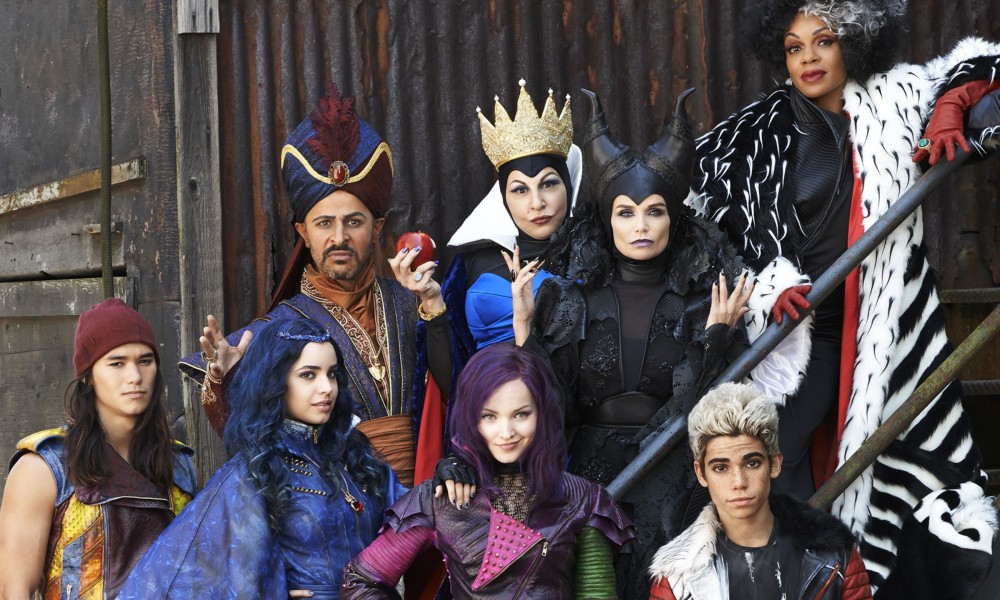 Not a scene from the film, but damn it, too many important characters to ignore.

JUST KIDDING IT IS TOTALLY A MUSICAL TOO, I WAS WRONG.

Ahem. Ben (Mitchell Hope) is the son of the Beast (Dan Payne) and Belle (Keegan Connor Tracy, who is also in Once Upon A Time), and wants to make his first proclamation as almost king! You see, a long time ago, after his parents got married, they brought all the kingdoms together under one rule, which apparently is a bunch of Disney stuff. They then took all the bad people and left them on a magical island to live out their days all sad and shit.

Those bad people also had kids, so Ben wants to give a few of them a chance and bring them over to rich people awesome boarding school. He only wants the worst of them for now, for a trial run. And apparently the four worst on the island are…

Great! Now their kids can carry on their parents wishes. Mel needs to steal a wand to free them from the island, Evie needs to find a prince to marry to take over his castle, Carlos needs to…I dunno, kill a puppy or something, and Jay needs to just steal stuff like a criminal street rat.

So it should be easy! They just need to also deal with, you guessed it, high school life. Girls, boys, class, sports, balls, homework, mutts. All of this wonderful stuff. And hey, a big plot line involves them using magic to make the hair of some of the girls at school prettier. Actually, that is a big plot line. Like, top 3.

Of course this asks the question, do you have to be like your parents, or can you sing yourself into a better position?

The rest of the cast is basically made up of people just to name drop. Like Mulan’s dauhgter, Lonnie (Dianne Doan), Aurora’s daughter, Audrey (Sarah Jeffery), Chad Charming (Jedidiah Goodacre), the Fairy Godmother (Melanie Paxson) and her daughter (Brenna D’Amico), and Doug! (Zachary Gibson), son of…Dopey. Sure. Whatever. 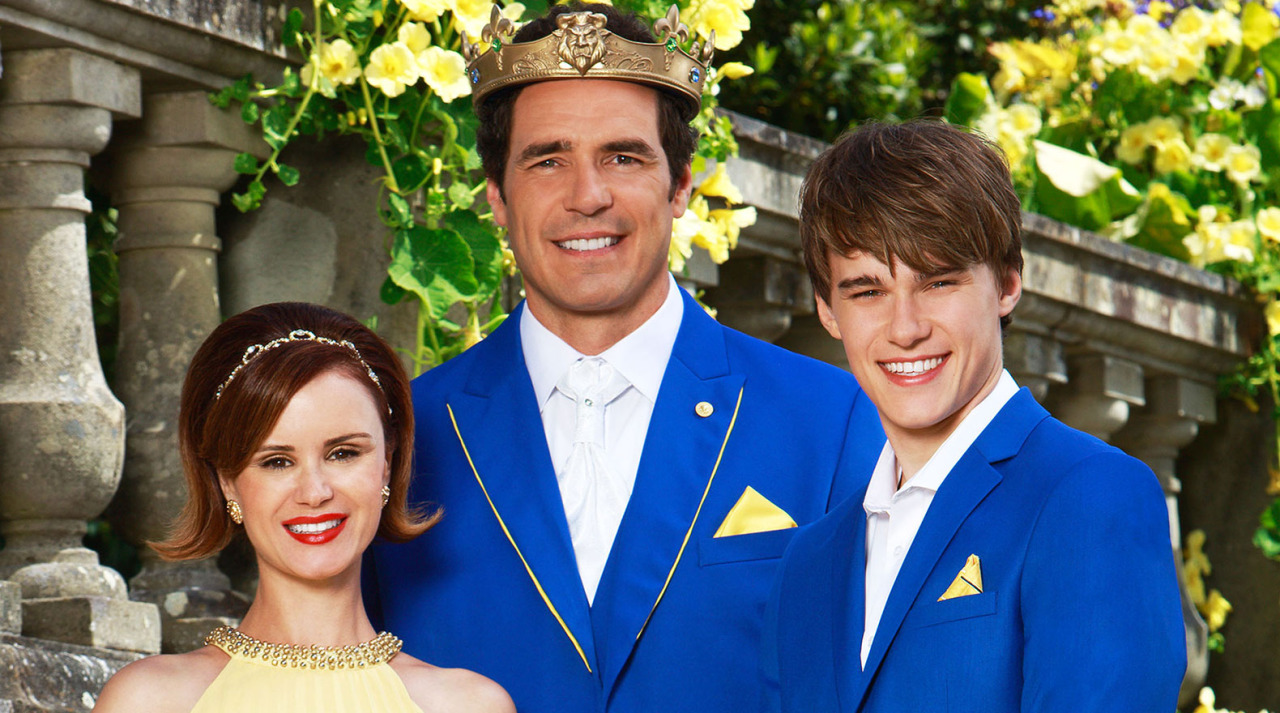 Yeah, no one likes Beast when he goes human. Booo. Hiss.

Somehow before this point, I have already reached 600 words in the review. Shame, because I have a bunch more to go!

I was definitely surprised to hear music in this film, kind of came out of nowhere. It was mostly okay. Some songs were bad. The Song “If Only” was decent, however it featured the worst lip singing from Mel and featured a lot of flashbacks from the movie during it. The movie isn’t that long and the song happened halfway through the film, so there wasn’t really much to flashback, or a need at all.

It also had too many central characters, not knowing what to do with them. Carlos was afraid of dogs at the start, and then liked them? Okay, boring. Jay just…stole things for a little bit then played sports and also was sent to the background. Jafar probably had two whole lines and waste wasted. Cruella de Vil was turned into a crazy lady.

Speaking of de Vil, how in the fuck is that the best they have to work with? Not only does 101 Dalmations not even remotely fit in timeline wise with the rest of them (And Aladdin is a huge stretch), it is a lady who wanted to kill some dogs for their fur. They say she is one of the top evil people there, and that is just bananas. I cannot even begin to let that be any amount of believable.

The villains all live together in one house too. And literally no one is married outside of Belle/Beast. Each of these kids only knows about their evil parent, the other member just completely gone.

Descendants is an average to good concept for fiction, it truly is. But it seems they half-assed the whole film. If they kept it to just Mel/Evie, it could probably be a stronger film (but the male demographic!!). Too much wasted potential. They are apparently going to turn it into animated series later this year, which is a great place for it. With a cartoon some of these characters can actual gain some depth and not just background pieces to Mel.

This is the seventh film of the franchise. SEVENTH. X-Men: Days Of Future Past. When I first heard about this, I was excited. It was a very ambitions plot and storyline to go for, time travel tends to do that. Couple that with the fact that X-Men: First Class was actually decent meant the series might be headed off in a certain way.

But you know what was terrible? The advertisements for this movie. By having two time lines of cast, we have a shit ton of characters, and Fox decided the best way to advertise it was to give every character its own…thing, whatever. So, magazines would have 30 unique covers, or 30 individual character posters, or whatever. No giant cast pictures, no, just an overabundance of individual character shit.

Here is one of the real reasons this bugs me. Anna Paquin. It was stated a long time ago, in the year of 2013, that she was basically cut from the movie. Then it became a rumor. Then it became true and then changed to say that she would just be a cameo. Just a cameo? And still getting full ad treatment? Boo. That is almost worst than the 47 Ronin ad issues, because she is supposed to be a bigger character.

Finally, in the credits, her name was higher than many other people in the film. Because she is more famous? Than Ellen Page? Fuck that. She was in the original X-Men movies then a shitty TV show, while Page has had a big lucrative film career. It is just nonsensical, and most of this doesn’t matter for the actual movie. 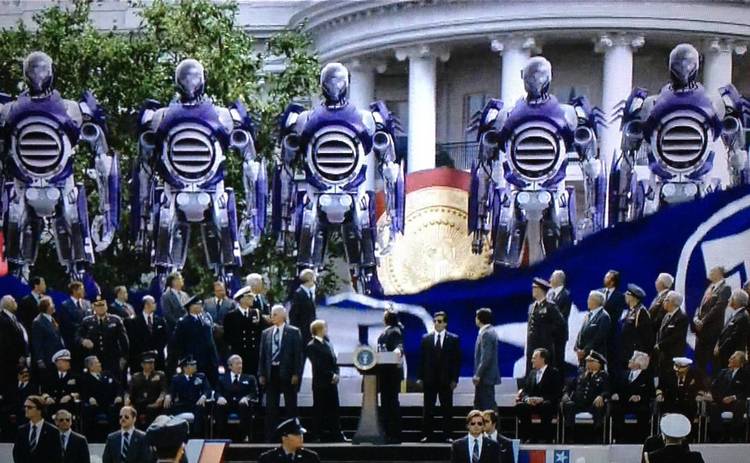 No, but these robots matter. AW YEAH SENTINELS!

In the near future, everything is bad, lots are dead. Mutants. Humans who would give birth to future mutants. The sentinels have destroyed it all. Kitty Pryde (Ellen Page) has an unexplained ability to also let people go back in time with their consciousness to their body and like, change the future. But only for a few days, maybe a week. This is long enough to help their band of mutants survive and run, but not long enough to fix it.

No, they’d have to go back to the 1970’s, before Mystique (Jennifer Lawrence) (who’s actual mutant power seems to be very limber leg maneuvers) kills the creator of the Sentinels (Peter Dinklage). But the process to send back a consciousness would tear apart a brain. Unless of course, the brain can heal itself. Hmm.

Enter Wolverine (Hugh Jackman) ready to travel back in time, convince past Magneto (Michael Fassbender) and past Xavier (James McAvoy) to work together, change the future, and fix their stupidity.

Here is where I talk about everyone in the film, but in one giant paragraph. Maybe the new people first? Like, Quicksilver (Evan Peters), Toad (Evan Jonigkeit), Bishop (Omar Sy), Blink (Bingbing Fan), Sunspot (Adan Canto) and Warpath (Booboo Stewart). 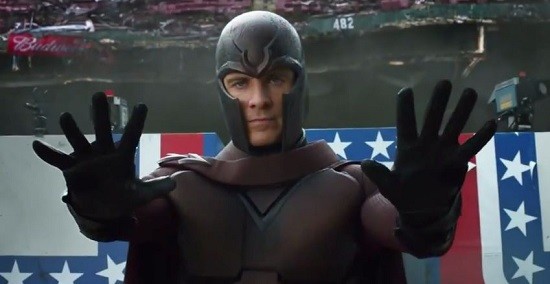 I will only advertise one character per picture, as per movie tradition.

Yay Sentinels! Like a lot a folks in my age bracket, the Sentinels were one of the first X-Men plots I was exposed to, thanks to the first two episodes of the X-Men Animated TV Series on Fox. Shit, that is where I learned most of my basic plot lines, and why to fear the motherfucking Juggernaut. They were fascinating to see and I love the changes made to them. They were TERRIFYING and kept the viewers on the edge of the seat.

What else rocked? Most of the movie. Sure, some plot elements could have been explained better. But the Xavier/Magneto back story was great, a good continuation from First Class. Speaking of dickheads, Fassbender as Magneto is a huge one, and it was awesome to see. The best part is, you can easily relate to where he is coming from and he isn’t just a mindless villain.

Speaking of even more awesome, Fox’s adaption of Quicksilver was so entertaining. He didn’t have the bigger role in the movie, but whenever he was on screen, you paid attention to him and no one else. They really went all out to make him stand out, kind of a big middle finger to Marvel, daring them to raise the bar in Avengers: Age of Ultron.

To make this long review a bit shorter, here is the quicker analysis: So many characters, but outside of tiny cameos, they all were great and wonderful. Special effects and action was good. Story and plot was good. Holy shit, give me Apocalypse.

Did this 100% fit the continuity issues between a few of the movies? Heck no, but at least it gave it a good try and an entertaining one to boot.