Odd Thomas was definitely not on my original watch list. Not until I saw that it recently came out and had an young actor on the front who I tended to enjoy. Yep, then I dropped my plans, and decided I needed to see this movie instead.

Apparently it is based on a book series, but also it went under some legal trouble recently. According to the internet, it was delayed indefinitely for release due to funds not being spent as promised for ads or whatever. So they delayed it for over a year! I think other countries ended up getting it before us, because of that. I guess sucks most for the author, who was probably stoked his book was getting made into a movie, but then getting swept under the rug for legal reasons.

Well, that’s the most fucked up silver surfer I have seen.

Odd Thomas is not about a strange boy named Thomas. Nope. That is his first and last name, Odd Thomas (Anton Yelchin). There is a story behind that, but I won’t get into it.

Let’s just say that Odd’s upbringing has made things a bit weird for the boy. He can see dead people, and they tend to point out who killed them so he can avenge them. He also has other minor supernatural/spiritual abilities when it comes to seeing dead entities. Like the Bodachs above, which only appear when a great death will occur.

Unfortunately, in his small town Pico Mundo, California, he has started to see not just one Bodach, but a LOT of them. They are following around this Fungus Bob Robertson (Shuler Hensley), a nickname, don’t worry, who now Odd has a feeling is going to commit some very heinous crime on his small town. His girlfriend, Stormy (Addison Timlin), who he is destined to be with forever knows about his powers and is willing to help despite having none of her own. He also wants to win the support of her father, Wyatt Porter (Willem Dafoe), the local police chief.

As Odd begins to follow Fungus Bob around, he finds himself somewhere darker and more sinister than he has ever experienced before. 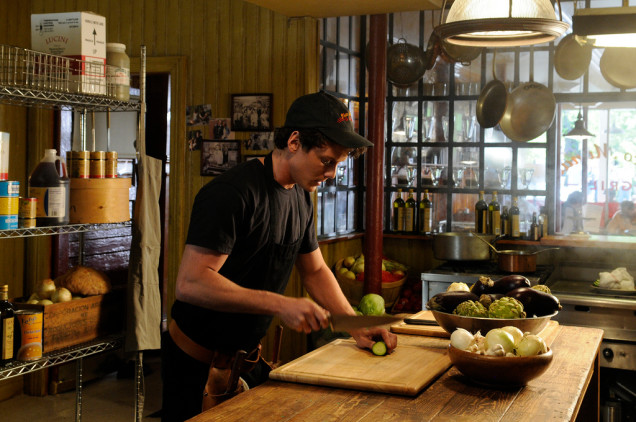 Man, this guy is just a cook. I want my spiritual advisers to at least be Maître D’.

Oh man, a lot of stuff happened in this movie. In particular, I really enjoyed the ending over all. There were twists and turns, everything falling into place, action, death, demons, you name it. But at the same time, the film had a lot of slower parts that I didn’t enjoy as well.

Here is what I can say. I thought Yelchin did a good job. He felt very believable as his character. Despite the mediocre feeling towards parts of the film in the middle, I am giving it a passing grade overall because of how much I liked the ending.

In fact, this would be the third ever movie I review on my website based on a book, that really makes me want to read the book after the fact. The other two were Warm Bodies and The Perks of Being A Wallflower. The main difference of those two and this one is that they got a 4 out of 4, but this one definitely wasn’t a good enough movie to earn that. However, it is certainly interesting. The fact that there are multiple books and most likely no more movies to be made from that increases my chances of reading them.

If you want a weird and unique movie, you might give this a shot, just don’t expect high quality art as you do.