Super 8, by JJ Abrams, has been one of the more hyped releases for awhile now. (Outside of Twilights, Harry Potters, and Hangover 2). Honestly, I have been asked a LOT when this movie is finally coming out, as they pushed it back at least once from October to now.

But I think a lot of the hype is warranted.

The film takes place at the end of the 70s, Disco is still good, and technology is still not rampant. If it was, these kids would have a jillion youtube hits. Riley Griffiths is a kid with a dream, to make a movie on his 8MM camera and be shown in a local festival. So he gets his friends, borrows a camera, and starts his dream. Doing a zombie flick. Yay zombies! They even convince AJ Michalka (sister of Aly!) to join their project and be the detective(Gabriel Brasso from The Big C)’s wife.

Afterall, ever good production needs some T&A. For the kids, that is her. Also involved are Zach Mills, Ryan Lee, and Joel Courtney, son of a cop (Kyle Chandler), great at makeup, and actual main character (Got cha!).

While filming a scene at the local train station, they see a train coming past. They quickly rush to film their scene, thanks to the great production value! But a dude in a truck rams the train and everything goes to hell. The End.

Or not. Holy shit wreckage everyone running, and the camera filmed it all! But what were those weird noises? Did they see a creature? What about these cube things? Whats going on? They of course decide to tell no one they were out there, run away, and (sort of) try to solve the mystery, while at the same time weird things (thievery) and deaths begin to happen around time.

So yeah. That is what this movie is about. Making movies. Young life love and friendships. And holy shit alien monster thing.

I really liked it though. A lot of the kids are more or less unknown actors, who have only one (this) or a few film credits. So the majority of the cast was just fresh and new, giving it a more real feel. Unless you watched the Friday Night Lights series, then you probably don’t know Kyle Chandler either. What I really liked was just the emotions everyone conveyed in the movie. Their fear seemed real (probably had Rob Reiner yelling at them, for some reason), and their strive to work together just gave that “ah, youth! nostalgia!” feeling.

You won’t be screwed into never seeing the monster. You will get more than enough to appease that palette, don’t worry. 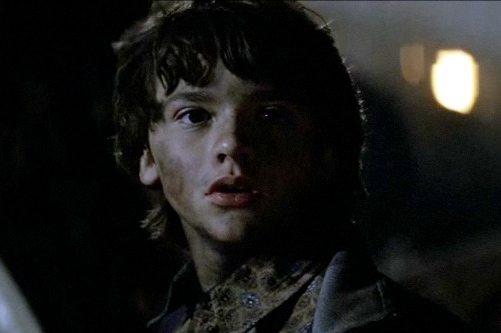 Don’t give me that look kid. I just never saw it. That is what happens when it comes out before you are born and the parents never show it to you when you’re a kid. What? hey. Come back here. Readers! Stop leaving my site saying I have lost all my movie credentials! Noooooo!

You guys should watch it. It is about 2 hours long. Some parts in the middle are a bit more boring than the rest, but if you sally forth, you can make it, I swear. Also, in the credits you get to see the Zombie movie in all its awesomeness.